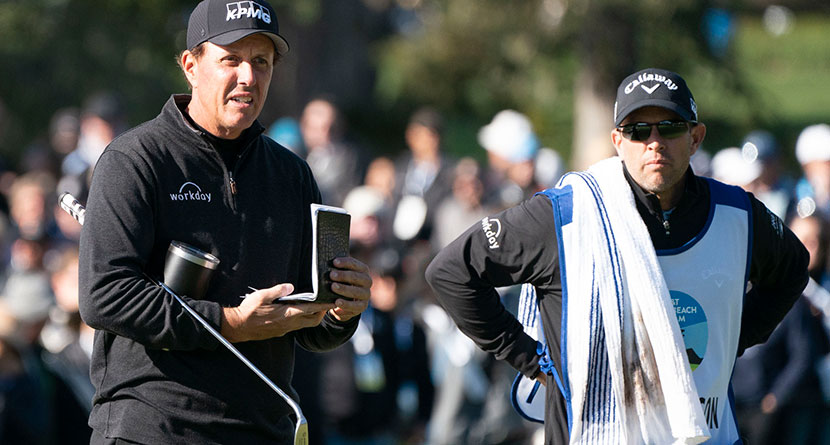 Phil Will Have Swing Coach On Bag At Riv

Due to a couple lingering injuries, with Phil’s blessing and encouragement I’m taking this week off from caddying to rest and recover. Andrew Getson will be on the bag this week for me. Gotta be healthy for the ‘majors’ stretch coming up soon.

There’s no rest for the weary if you’re Phil Mickelson. The five-time major champion is playing for the fifth consecutive week over a stretch that includes a brief round-trip to Saudi Arabia for the European Tour’s Saudi International sandwiched between a pair of California-based PGA Tour events.

While the new svelte Phil seems to be chugging right along, the travel seems to have taken a toll on his brother and caddie, Tim, who announced on Wednesday that he wouldn’t be on the bag for his big brother this week at The Genesis Invitational due to “a couple lingering injuries.”

Phil’s swing coach Andrew Getson will take over caddie duties for Tim for the time being.

Mickelson is expected to take next week off even if he makes it into the WGC-Mexico Championship field with the Florida swing following soon after. Last year, Mickelson played in Mexico, at the Arnold Palmer Invitational, the Players Championship the WGC-Dell Match Play in the lead-up to the Masters.

Impressive 2019 financials turned in by @CallawayGolf.
Chevron brand year end sales $1.7 billion, a 37% yr over yr increase from 2018.
Operating profits of $133 million up 3% & a record for Callaway. pic.twitter.com/qW6plkqKG8

Callaway announced its 2019 financials on Monday, posting a full-year net sales record of $1.7 billion, a 37% increase compared to 2018. The company’s full-year operating income of $133 million, a 3% increase and another record for the company.

“2019 was another successful year for our company,” Chip Brewer, President and Chief Executive Officer of Callaway Golf Company, said in a release. “In addition to record sales and operating profit, we made great progress executing our corporate strategy of transforming Callaway into a premium golf equipment and active lifestyle company.

“The acquisition of Jack Wolfskin in early 2019 was an important part of that strategy and our TravisMathew business continues to grow at double-digit rates. All the while, we remained steadfast in our focus on the golf equipment business which grew over 7%, outpacing the overall golf market and further strengthening our brand positions.”

The Jack Wolfskin brand, a premium European outdoor lifestyle, footwear and apparel brand popular among hikers, cyclists, skiers, and campers, contributed $356 million of sales growth compared to 2018, which was a big piece of Callaway’s bottom line in 2019.

Kobe Bryant wasn’t a golfer but his name, numbers and likeness are all over the Genesis Invitational this weekend at the Riviera Coubtry Club. “He had such an impact on all of our lives,” said Bryson DeChambeau. “He inspired all of us to do better.” https://t.co/rNzfsePq94

The PGA Tour tees it up at famed Riviera Country Club this week, just 20 miles from downtown Los Angeles, and while many of the pros have made statements and paid homage over the past two weeks since Kobe Bryant’s tragic death, there’s more to come at this week’s L.A. stop.

On the 8th hole at Riv, the hole sign has been made-up to honor Bryant, colored L.A. Laker purple and gold and the word “MAMBA” emblazoned underneath the hole’s particulars.

In more personal tributes, TaylorMade staffers such as Rory McIlroy and Jon Rahm, among others, are putting some Bryant-inspired headcovers and putter covers in the bag this week as well.

Caves Valley Golf Club in Owings Mills will host the 2021 BMW Championship, the second leg of the FedEx Cup Playoffs. It will be the first time the city has hosted the game’s top Tour since the Eastern Open Invitational at Mount Pleasant Municipal Golf Club in 1962.

“(It’s a) great honor to be selected as host course given the number of courses around the country that would love to host the championship, so very big deal for Caves Valley,” Steve Fader, chairman of the Caves Valley Golf Club, said, “But equally important, if not more important, is the economic impact of hosting a championship like this in Baltimore, for Baltimore County, Baltimore City and the state of Maryland.”

The BMW Championship, which will be held at Olympia Fields this year, is contested in the Chicago area every other year, but it has traveled to Indiana, Colorado and Pennsylvania over the past decade. You can now add Maryland to that list.