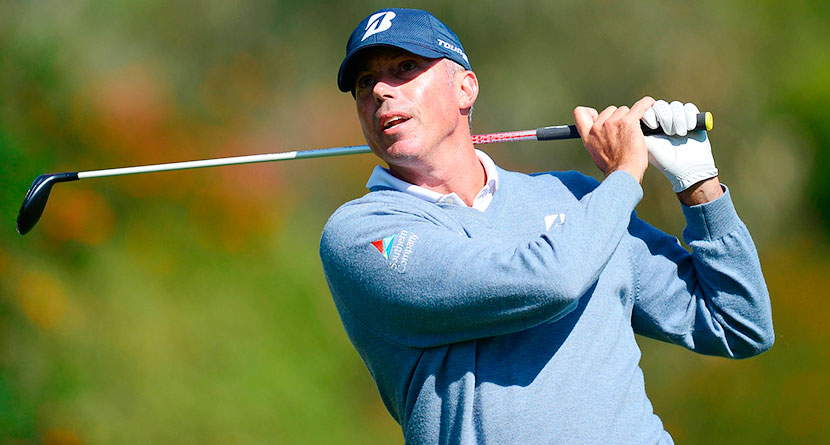 No surprise, @McIlroyRory deftly cut to the heart of the distance project today: “A lot of the stuff about the ball going too far & technology, it really pertains to 0.1 % of golfers out there. If they want to try to contain what we do as touring professionals, I’m all for that.”

Lost in the shuffle of the anticipation of the best tournament field of the year this week at Riviera Country Club was Rory McIlroy’s Wednesday afternoon news conference.

The always-thoughtful McIlroy is always a good listen in the interview room, but he said something interesting that other top players have tip-toed around since the release of the USGA and R&A’s Distance Insight Report last week: he’s for a rollback or bifurcation.

“I think the biggest thing that came out of the report for me, a lot of the stuff about the ball going too far and technology, it really pertains to 0.1 percent of golfers out there. So look, if they want to try to contain what we do as touring professionals, I’m all for that,” he said. “I think golf has a responsibility to minimize its footprint as much as it possibly can. For me, I think the sustainability aspect of what they’re trying to do is very important and that’s the one thing I would definitely stand behind.”

The PGA Tour arriving in Los Angeles only two weeks after the tragic death of Kobe Bryant was always going to have some special homages paid to the Black Mamba, but tournament host Tiger Woods paid inadvertent respect on his very first hole of the event.

Playing the short par-5 1st hole at Riviera Country Club, Woods hit a drive to the edge of the first fairway and an approach shot from 171 yards directly over the flag. His distance to the hole: 24 feet, 8 inches — the 24 and 8 being the two numbers Bryant wore for the Lakers over the course of his career.

“It’s ironic, isn’t it?” Woods said when asked about the distance of the putt. “It was a nice way to start. I didn’t know about the putt being that long. As I said, ironic having those two numbers. And then No. 8, happened to hit one in there close and had a nice little kick-in there for birdie.”

“You know, no matter what we do, I think for a while we’re going to always remember Kobe and what he meant, and especially here in SoCal and the entire sports world.”

We all know Phil Mickelson likes to hit BOMBS off the tee, and since he’s one of the most popular players on the Tour, regardless of what time he tees off, he’s going to have a pretty sizable gallery following him around. That’s typically an advantage for Phil who has been known to spray it a bit off the tee.

Starting his day on the back nine, Mickelson navigated Riviera’s more difficult nine in a respectable 1-under par before turning to the front nine and picking up another birdie on the easy par-5 first. Things went all wrong a few holes later, however.

He yanked his tee ball off the tee into some long and straggly Kikuyu rough. The unique grass has a tendency to eat golf balls up and that’s exactly what it did to Mickelson’s despite the efforts of a throng of spectators joining the search.

Mickelson would go on to double bogey the hole, giving back both of the strokes he had picked up through 11 holes to par. He would card a third birdie of the round on the par-4 7th, but a second double bogey of the day on the ninth hole slid him to 1-over par for the day.

Matt Kuchar made his first birdie of the 2020 Genesis Invitational on the very first hole he played, the short par-4 10th, and he made six more over the course of the next four hours to post a 7-under par 64 in the first round.

Kuchar’s first bogey of the tournament still hasn’t happened as he heads into Friday’s second, which is somewhat of an anomaly around the classic George Thomas design.

“I think it’s one of the few courses that has truly stood the test of time,” Kuchar said. “It was a great test of golf 50 years ago when Ben Hogan was playing, it’s a great test today with Tiger Woods and all the young boys playing.”

His 64 was three shots better than anyone else in the world-class field could muster on Thursday, giving him a nice cushion that’s all but guaranteed to be erased by the time he tees off in his second round at 3:13 EST on Friday.

Among the chasers at 4-under par and in a tie for second are KH Lee, Russell Henley, Harold Varner III, Adam Schenk and Wyndham Clark. Rory McIlroy, Jason Day, Bryson DeChambeau and Patrick Reed lead the pack at 3-under par.