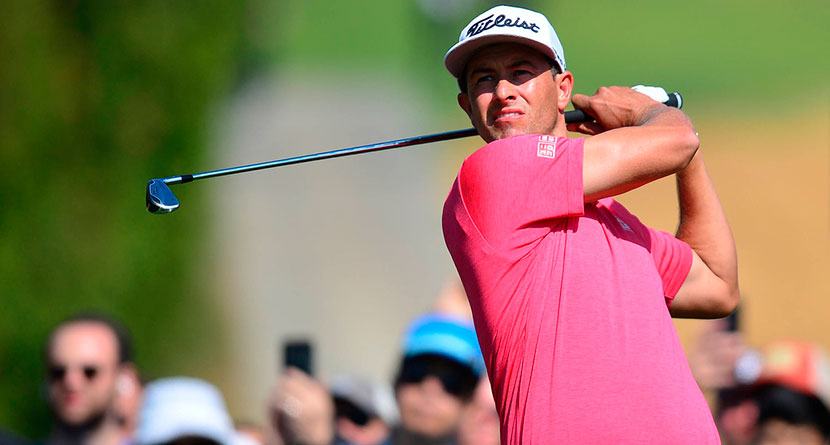 “It’s a big step,” Scott, 39, said in the aftermath. “Whatever point in my career I’m at and I hadn’t won for three years, and this feels very, very special.”

It was a crazy day around Riviera as one of the most revered layouts showed its mettle early and often. Rory McIlroy entered the final round tied for the 54-hole lead with Scott and fellow playing partner Matt Kuchar, but a triple-bogey on the 5th hole knocked the World No. 1 out of the driver’s seat. Scott made a double-bogey of his own on the hole, ultimately bringing a pack of chasers back into the mix early in the day.

While runs were not able to be sustained to the top of the leaderboard, Scott righted the ship to shoot a 1-under par 70 on a day when the field average was a full stroke over par.

Another one of the best players of this generation took home a title on Sunday breaking a two-year winless drought.

Inbee Park won the Women’s Australian Open by three strokes over American Amy Olson who closed with a final-round 70. Park had a seven-shot lead at one point on Sunday, but following bogeys on the 14th and 16th holes, her cushion was down to two strokes with two holes to play. Olson had already posted 11-under par.

Park, a former No. 1 and seven-time major champion, calmed herself and played the final two holes in 1-under par to claim her 20th LPGA Tour title.

“It was a tough day out there today, really different to the last three days I played,” Park said. “It has been a while since I played in Australia, it’s been eight years since I played here so I’m really happy to be back here playing in front of Australian fans and to hold the trophy is even more special.”

European Tour Postpones Pair Of Events Because Of Coronavirus

The Maybank Championship and Volvo China Open have both been postponed due to the outbreak of Corona-virus.

Discussions are ongoing with all parties looking into the possibility of rescheduling both tournaments later this season.

The European Tour became the lastest professional golf circuit to postpone or cancel events due to the outbreak of the coronavirus, it announced on Friday morning.

Two events — The Maybank Championship in Kuala Lumpur and The Volvo China Open in Shenzhen — have been postponed and the Tour is in talks with their respective decision-makers in hopes of rescheduling them later this season.

“The well-being of our players, spectators and staff is always our absolute priority,” Chief Executive of the European Tour Keith Pelley said in a statement. “While it is therefore regrettable that the Maybank Championship and Volvo China Open have been postponed, we feel this is the correct course of action at this time. We are currently investigating alternative dates for both events.”

A triple bogey on the second hole of his third round put Andrew Novak behind the 8-ball, but four consecutive birdies stabilized the 24-year-old and allowed him to enter Sunday’s final round of the LECOM Suncoast Classic in Lakewood Ranch, Florida one shot back of 54-hole leader Peter Uihlein.

From there, he kept himself in the tournament and finished it off by making five birdies in his final 10 holes, including on the 71st and 72nd holes to outpace John Chin and Taylor Montgomery to capture his first-ever Korn Ferry Tour victory.

“This has been what I’ve been working three years for since I turned pro, and even before then in college and all those hours,” he said. “It’s awesome to have an opportunity. I’ve still got more work to do — one win doesn’t lock it up — but this is obviously a great start.”

The win moves Novak into third place on the season-long points list, which all but guarantees him a PGA Tour card next season.