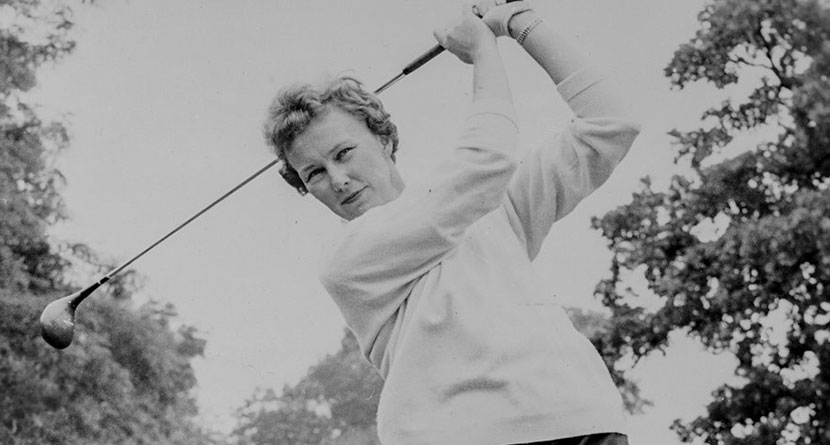 Hall Of Famer Mickey Wright Passes Away At 85

“We are deeply saddened to learn about the passing of Mickey Wright. We lost a legend, but we may also have lost the best swing in golf history today. Our thoughts are with her family and friends.” – @LPGACommish Michael Whan

The golf world lost a legend on Monday as 13-time major champion Mickey Wright passed away on Monday from a heart attack. She was 85 years old.

Wright, who won 82 times on the LPGA Tour, possessed one of the greatest swings in golf history and compiled one of the game’s greatest resumes before retiring at age 34 after just 14 years as a professional.

One of the era’s greatest draws, Wright’s popularity was such that tournament sponsors would threaten to cancel their events if she didn’t tee it up.

“The pressure was so great,” Kathy Whitworth said about her friend and rival, according to the Hall of Fame. “Sponsors threatened to cancel their tournaments if she didn’t play. And, knowing that if they canceled, the rest of us wouldn’t be able to play, Mickey would always play.”

Wright won at least 10 times on Tour in four consecutive seasons from 1961-64 and holds the single-season wins record (13).

“For fundamentals, the greatest swing belonged to Mickey Wright.”

While neither side likes to give credence to what appears to be a burgeoning rivalry between two of the most consistently great golfers of the past few years, another layer of the Rory McIlroy and Brooks Koepka paradigm was revealed in Part Three of McIlroy’s sit-down interview with The Irish Independent’s Paul Kimmage (Premium access only).

Wrapping up their three-part series, McIlroy talked at length about Kopeka and the desire and intensity he brings to the game. While not harboring ill will towards one another, McIlroy admitted that his loss to Koepka at the WGC-FedEx St. Jude Invitational came in part because he came in too relaxed, while Koepka looked at the match as a mano-e-mano battle.

After the fact, Rory said he was at a sponsor obligation with his manager, who sensed that his prized client was off. In an effort to spark McIlroy, he showed him a text that Koepka had sent to his friends on the eve of their final pairing in Memphis.

“Yeah, and f*ck he sort of did,” McIlroy said. “Well, Brooks and I have always got on great – we do get on great – but he was obviously taking that mindset, ‘It’s me and him’. And I guess it was a good thing that he thinks highly of me, or not highly of me, if he was saying he was going to crush me.”

McIlroy said he didn’t take the text personally, but it didn’t alter the way he would go into future rounds with Koepka, knowing that he had to match his intensity.

“You’re never going to make it personal but there was a little, ‘Okay, if that’s the way you want to do it then I’ll play that game too,'” McIlroy said.

Real common man golf here from @TigerWoods. Just fishing for his ball in the trash. Salt of the earth type stuff (Via @turko816/IG) pic.twitter.com/EWx25IoMSJ

After eagling the first hole of the tournament, Woods would play the rest of the event 13-over par, which was good enough for last place among those to make the cut. En route to his final-round 6-over par 77, Woods added insult to injury when his wayward drive on the par-4 third hole, his 12th of the day, came to rest in a garbage bag off the left side of the fairway.

Woods was required to retrieve his ball among the trash in order to identify and dop it; a perfect microcosm of his week.

So, what’s next for Tiger? Go home, train and eat a lot before getting back after it during the Florida swing.

Tiger’s mission after a disappointing weekend at @thegenesisinv? Spend the next week eating, training, and gaining weight.

Smiles all around for Adam Scott following his win at @thegenesisinv. #pgatour pic.twitter.com/lQGDJ4YEed

The Genesis Invitational enjoyed a bump in notoriety and prestige this year as it garnered “elevated status” from the PGA Tour, which resulted in a smaller field and a larger prize pool with better perks for winning.

Adam Scott reaped those benefits with his two-stroke victory over Matt Kuchar, Sung Kang and Scott Brown on Sunday, which most notably included a purse increase of $1.9 million, $342,000 of which went to the winner.