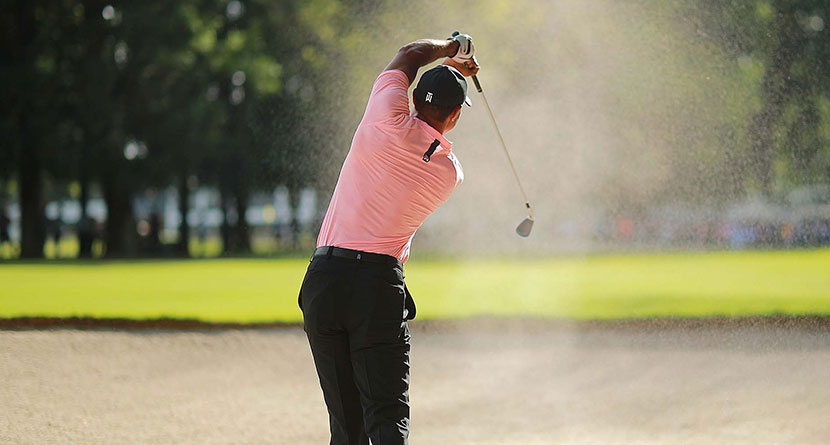 Tiger Woods is taking the week off, which means fans in Mexico City won’t be able to see the game’s most popular star this week at the WGC-Mexico Championship. Despite that fact, Woods’ presence will be felt on the grounds of Club de Golf Chapultepec.

Just outside the right fairway bunker at the par-4 ninth hole, a new plaque has been planted to commemorate Woods’ incredible shot from the sand during the second round of the event last year.

After Woods pulled off the shot, fellow Tour pro Matt Wallace tweeted that there should be a plaque put in place in honor of the shot. A year later, he got his wish.

Imagine what the course would have done were he to have made the ensuing birdie putt.

Brooks Koepka once made a hole-in-one at Augusta and forgot all about it (or so he says): https://t.co/PR3YSNb4ZR pic.twitter.com/wioaBbEgU8

Brooks Koepka can sometimes come off as a little too cool for school. He fancies himself to be an athlete, not a golfer, so occasionally he goes into “jock mode” and says something that makes you scratch your head.

That’s exactly what happened when he sat down with Bleacher Report on Monday to do an AMA (ask me anything) question-and-answer segment as part of his PGA Championship media day obligations. When the inevitable question about holes-in-one came up, Koepka had an interesting answer.

@DREWSKI79: How many hole in ones have you made?

I don’t know actually. I don’t keep track. I think I had a hole in one at Augusta and I forgot about it later that day.

Somehow, against all odds, Koepka made the alleged ace at one of golf’s most famous courses, forgot about it but remembered it enough to relay the story in a public setting. Fascinating.

Among the other highlights from the Q&A, this shot at his friend, Dustin Johnson.

@benfadden3: Would you rather beat Tiger or DJ on the 18th hole at the Masters?

I already know I’m going to beat DJ, so I’ll go with Tiger.

When you settle in to watch some golf this weekend, the elevation at Club de Golf Chapultepec is going to be a massive storyline on the broadcast.

Sitting at 7,800 feet above sea level, players will have to deal with a 10-18% increase in distance on their stock numbers, but as a few guys explained to USA Today’s Steve DiMeglio earlier this week, a lot of that math equation goes into how they hit it.

“You have to make sure you hit it solid every time,” Billy Horschel said. “And no matter what launch you want to hit it, you pick a window to hit it through. Let’s say, if you’re trying to hit 7-iron 212 yards, which is what I’m hitting it here instead of 180 that I regularly hit it, if I launch it too low, it won’t go 212 yards. It will go about 205 and that’s a big difference. If I launch it too high, it will go 220.

“Hit it through the window you want.”

Reigning U.S. Open Champion Gary Woodland doesn’t want to clutter his mind that much, conversely. He’s paying his caddie to do the calculations for him, and he wants to be playing to a number he’s comfortable with the 51 other weeks of the year.

“The big deal for me is the mental side,” he said. “I just want to hear the adjusted number. Then I know I can make a better swing instead of trying to hit an 8-iron 215 yards and swinging a bit harder when I don’t have to.”

We are delighted to announce the first Women’s Amateur Latin America presented by The R&A and the @ANNIKA_Fdn ?️‍♀️ The championship will be played in Argentina in September 2020 with the winner earning an exemption into the @AIGWBO ? Click here for more ? https://t.co/vVZZG1R4wW pic.twitter.com/u9ArsZ0D89

Much like its counterpart in the men’s game, the Women’s Amateur Latin America Championship, which was announced this week, will feature the best amateurs from around Latin America and have an exemption to a major championship attached for the winner.

“It is important for us to provide the very best women’s amateur golfers in Latin America with opportunities to compete and excel at the very highest level as part of our drive to grow and develop golf in key regions around the world,” Martin Slumbers, Chief Executive of The R&A, said. “We have seen how the Latin America Amateur Championship has unearthed talents such as Abel Gallegos, Joaquin Niemann and Alvaro Ortiz and so we look forward to working with the ANNIKA Foundation to replicating this success and identifying the next generation of golfers in the women’s game in the years to come.”

“This is an incredibly exciting elevation of the ANNIKA Foundation’s partnership with The R&A and marks a major milestone for our global circuit of girls’ golf championships,” Annika Sörenstam said. “Not only are we furthering our influence in a region that we feel holds great promise for growth, but offering the winner a place in the AIG Women’s British Open speaks to the great strides we’ve made since our first ANNIKA Invitational Latin America in 2016. This is a big day for golf in Latin America and we’re honored to be a part of it.”