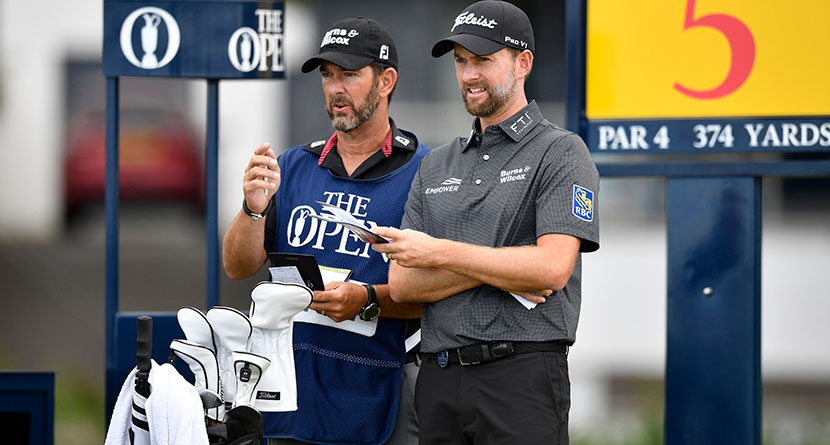 By and large, Tour caddies are perfectly happy to slip into the background and not make waves. After all, their job is to keep their golfer focussed on the task at hand with as little distractions as possible, so it stands to reason that Paul Tesori — caddie for Webb Simpson — likes his clothes to come in neutral colorways.

Knowing this, Webb Simpson enlisted the help of his Footjoy reps on Tour to enlist Tesori in a made-up caddie scripting program that would force Tesori to go outside his comfort zone this week in Mexico with some floral-printed shirts and stripped shorts.

“My caddy, Paul Tesori (aka Buhdro) is conservative when it comes to clothing,” Simpson captioned an Instagram post detailing the prank. “Solids. Safe colors. Navy. Black. White. Grey. No patterns. (Definitely) no flowers and absolutely no pastels. So with the help of my friends at Footjoy, we decided to have a little fun with Pauly T.”

My caddy, @paultesori (aka Buhdro) is conservative when it comes to clothing. Solids. Safe colors. Navy. Black. White. Grey. No patterns. Def no flowers and absolutely no pastels. So with the help of my friends @footjoy, we decided to have a little fun with Pauly T. Swipe right to see it unfold… #Scripted #Patterned #Gotem #WGCMexico #Pranked

“I was duped,” Tesori commented on Simpson’s post. “Hook line and sinker. I had no idea it was happening. It’s an impressive prank when the pranked thinks it was worth the effort. No retaliation. Just good stories.”

Hoffman Doesn’t Want To Be “Owned By Saudi Money”

With Rory McIlroy taking a stand against the Premier Golf League earlier this week, it appears that he has empowered other pros to make their anti-PGL feelings known as well.

PGA Tour Player Advisory Committee chairman Chairman Charley Hoffman spoke openly about his concerns with the PGL in an interview with Matt Adams on his Fairways of Life radio show, but even a skeptic like Hoffman couldn’t completely rule out the idea simply because of where the money is coming from.

“I think it’s intriguing that another group of people are willing to dump a bunch of money and try to guarantee us money, get some of the best players in the world to come over and play,”,” Hoffman said. “I just don’t think there’s any sustainability or really any traction, personally.

“I haven’t dug deep enough into any of that to see if it is. I don’t know if I would like to be owned by some Saudi money over there, but if something was a life-changing amount of money they offered me, you’d have to look at it as an independent contractor. Because there are no guarantees that I’ll have a PGA Tour card in three or four years.”

Therein lies the overriding issue for these pros: professional golf is a meritocracy in which practically nothing is guaranteed. While the upper echelon of the elite players can sustain themselves regardless of where they play, even the bottom half of the proposed 48-man league will have far fewer guarantees, and if a “life-changing” payday makes sense to them, it would difficult to not at least consider it.

With two weeks to digest the USGA and R&A Distance Insight Report, the CEO of Titleist’s parent company, Acushnet, released a statement disagreeing with the overall tenor of the report, and offered a rebuttal “in the spirit of contributing additional perspective to this discussion.”

“We believe the conclusions drawn in this report undervalue the skill and athleticism of the game’s very best players and focus far too much on the top of the men’s professional game and project this on golf and golfers as a whole,” Acushnet CEO David Maher wrote. “Furthermore, we believe that existing equipment regulations effectively govern the prospects of any significant increases in hitting distance by the game’s longest hitters.”

The USGA released a rebuttal to the rebuttal, via the aforementioned host of Fairways of Life, Matt Adams.

Equipment changes on the PGA Tour are the norm — it’s those with older equipment still in the bag that are the exception — but Rory McIlroy’s putter is always a club of interest because of its relative balky nature in comparison with the World No. 1’s more enviable skills.

Always one to give a thoughtful answer, McIlroy explained a change he made over the last two weeks to the length of his putter, which led to a +3.62 strokes gained: putting performance in the first round of the WGC-Mexico, which netted out to a two-stroke lead after 18 holes.

“I changed my putter when I got here,” McIlroy explained after his opening-round 65. “I went back to my old putter. I was sort of trying out a new putter last week and it didn’t quite work out the way I wanted it to, so I went back to the 34-inch. I was using a 35 last week. Yeah, I just felt a little bit more comfortable today and was seeing my lines a little bit better.

“Sometimes with the 34, my right arm can get a little high and my right shoulder can sort of roll over, but with a 35, a little longer, it sort of puts my shoulder and my right elbow into a better position, more on plane with the shaft. So it looked really good on video and it felt good, but once I got out there, just that inch difference in the putter, it moves your eye line and you sort of stop seeing your lines the way you usually do, and I especially struggled last week on right-to-left putts because when it’s a longer putter and the ball is above your feet, you feel like the putter is up in your belt.

“I struggled a little bit with it last week. I wasn’t really expecting it. But I saw that the tournament through with it, and it didn’t quite work the way I wanted to, so I went back to the one this week, and did a really good session on Tuesday on the greens, did a few drills I maybe haven’t done the last couple weeks, got a little bit more comfortable, and it was nice to see it pay off today.”

McIlroy leads Justin Thomas and Bubba Watson by two strokes after the first round. Four more players, including Bryson DeChambeau, are three shots back.