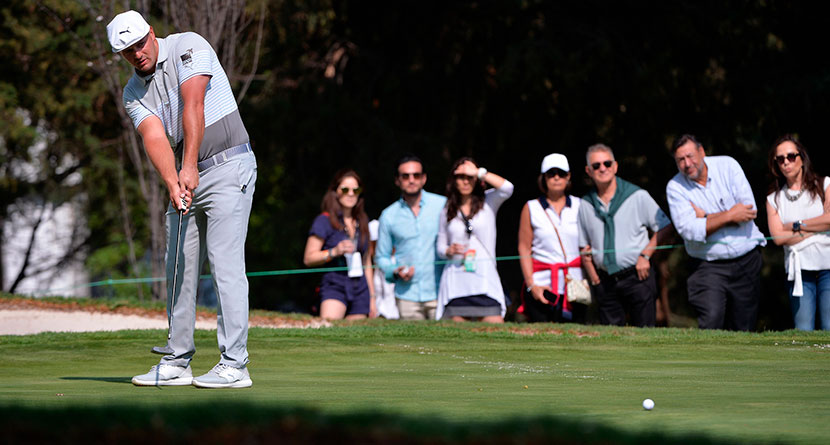 Bryson DeChambeau had his putter to thank for putting him in contention on Thursday and Friday at the WGC-Mexico Championship, but it was that same club that came up short on the weekend at Club de Golf Chapultepec and is causing the five-time Tour winner to “rethink” some things.

Over the first two rounds, DeChambeau picked up 8.318 strokes on the field average on the greens, but over the final two rounds, he lost 1.97 strokes to the field average, including two 3-putts in his final round, which ultimately became the difference between winning and losing in his mind.

“My speed was off today, and that’s the tournament right there. If I don’t three-putt I win,” he said. ““It seemed like it was coming off pretty hot, and then a couple putts came out where it just didn’t roll. I’ve got to rethink what’s going on with the putting a little bit, with the speed, and figure out what’s going on.”

This feels eerily like the beginning of last year for Rory McIlroy.

The World No. 1 once again put himself in contention on Sunday at the WGC-Mexico Championship, but failed to execute during his final round and came up short for the second consecutive week.

“Frustrating. I don’t feel like I got the best out of myself,” McIlroy said. “Obviously started the week well, and then I hit some loose shots, and I didn’t putt as well as I needed to over the last three days. I just let a few shots get away.”

McIlroy opened with a 6-under par 65 to take a two-shot lead, but saw his lead erased by eventual winner Patrick Reed on Friday. A pair of weekend 68s weren’t enough for McIlroy to keep pace with Reed, who finished four shots ahead of the top-ranked player in the world.

Last year, McIlroy became similarly frustrated when he finished no worse than T6 from January through mid-March in five starts, but failed to notch a win. He would, of course, win the Players Championship in late-March, and use that momentum to propel him to a three-win season, which included winning the FedEx Cup.

We scooped the FIRST EVER INTERVIEW with the man behind the @premgolfleague!

? Listen to it on the podcast:

The mystery and intrigue deriving from the potential launch of a professional golf circuit that could rival the PGA and European Tours had the veil lifted a bit this weekend as Rick Shiels released a podcast featuring Premier Golf League CEO Andrew Gardiner.

A lot of what Gardiner spoke about reinforced prior reports concerning the league’s proposed 48-man membership, which would participate as 12 four-person teams running concurrently with the established golf season, but not in conflict with the four major championships.

“This only happens if everybody wants it to happen, and that includes the best players in the world.”

Despite some initial pushback from the likes of Rory McIlroy, Bubba Watson and Charley Hoffman, Gardiner told GolfDigest.com that McIlroy’s comments, in particular, reminded him of a famous Mark Twain quote.

“It brought to mind the Mark Twain quote, ‘Rumors of my death were greatly exaggerated,’ as if this were some fatal wound,” Gardiner said.

He also revealed out that the proposed league was eyeing a January 2022 start date, although there are no guarantees in his high-stakes proposition.

“This could be forgotten in a few weeks’ time, or this 30 years from now could be looked back upon as the change that was good from the game and made it stronger,” he said.

Mary Ann walked into The Pavilion tonight for @OleMissMBB. She walks out with a NEW CAR thanks to our friends at @CannonMotors! pic.twitter.com/iZqgA5g73a

Mondays can be a little tough sometimes, but now that you’re pretty well caught up on the weekend in golf, here’s a nice reminder that golf is a fun game that can result in some pretty cool moments.