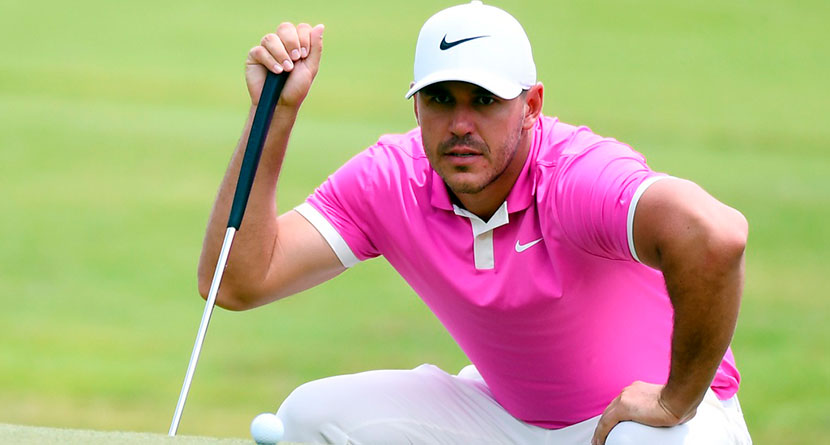 Koepka On PGL: I Want To Play Against The Best

Brooks Koepka has made his stance on the PGL very clear: he doesn’t care how much money he’s in line to make, it only matters to him who he would be competing against.

Expounding later, Koepka doubled down and expanded on his competition-over-money stance.

There you have it. What do you get the man who has everything? A plane.

“St. Andrews Of Texas” Up For Auction

If you think Augusta National or Pine Valley is exclusive, get a load of Wolf Point Golf Club in southeast Texas.

The brainchild of Al Stanger, a wealthy businessman who headed Electro-Methods, LLC, a manufacturing company for commercial and military jet engine parts. Wolf Point Golf Club is a sprawling 1,640-acre ranch that features an 18-hole golf course designed by architect Mike Nuzzo and course builder Don Mahaffey, a 12±-acre lake, a 5,000-foot runway and private hangar, direct access to the Gulf of Mexico and a 7,000-square-foot estate.

Stanger’s dream was to play golf everyday, and with Wolf Point as his backyard, it became a reality. Known as the St. Andrews of the Lone Star State, Wolf Point has been played by only a few people — estimated to be fewer than 200 — since its completion in 2008.

Stanger died in 2016, and his widow, Dianna, had the property listed for $11.5 million, but an auction is now underway that has a bid as of Wednesday evening of $7.5 million. If you’re so inclined, here is the auction page, which includes more information about the property.

Thank you @golf_com for featuring the exclusive Wolf Point Golf Club — now open for bidding! View the featured article below and head over to the property page (https://t.co/2Fuhmn64Vq) to watch the auction take place, closing out 2/27 Live in Dubai. pic.twitter.com/dJpg0AMQuk

Kiradech Continues To Be An Absolute Treasure

.@kiradech likes fast cars, practices shirtless and spends his paychecks on shoes…lots of shoes. On the latest @golf_subpar, Barn-Rat tells @ColtKnost and @thesleezyman about his secret shoe apartment that his wife found…

Kiradech Aphibarnrat is one of golf’s current best-kept secrets. A 30-year-old for Thailand, Aphibarnrat is probably better known for his meme-inducing photos than he is for his stout golf game.

The subject of a Vice Sports mini-documentary in 2017, Aphibarnrat has become known as the “Asian John Daly” for his stature and love of expensive things, which includes fast cars and a vast sneaker collection.

Appearing as a guest on the Golf.com Subpar podcast with Colt Knost and Drew Stoltz, Aphibarnrat revealed that he owns somewhere between 300-500 shoes. What’s with the huge discrepancy, you may ask? It depends on if you’re talking about the original pairs or the double pairs he’s purchased as collector’s items.

With such a collection, Aphibarnrat needed somewhere to store them, so he rented a secret apartment that his wife found out about.

“Last year, my lovely wife found out that I was renting an apartment where I was keeping the shoes,” Aphibarnrat said to laughs from the hosts. “She was so mad thinking I was paying for a room for some girls.”

While finding out that the Barn Rat wasn’t paying for some love shack, his “lovely wife” told him he had three days to get rid of everything.

The complete interview can be viewed here, and you can watch the 2017 minidoc below.

Money can change people, and when you’re playing professional golf for a living, that well can dry up quickly as France’s Mike Lorenzo-Vera knows all too well.

Competing in his first World Golf Championship last week at the WGC-Mexico Championship, MLV authored a first-person blog for the European Tour’s website in which he detailed his career from the beginning to his arrival in Mexico City, and it was a wild ride.

After earning his Euro Tour card in 2008 and having a solid year, making upwards of $380,000, some lean years followed, but his lifestyle didn’t.

“The last couple of years on the golf course have been good for me but I know all about the dark side,” Lorenzo-Vera wrote. “I really struggled in 2011, 2012 and 2013. And I mean big time. I finished almost last on the Challenge Tour in 2013 and I had almost €400,000 of debt in France because of bad decisions, partying, and being very generous to everybody around me.

“I never looked at my bank balance. Never. And then one day the card stopped working and I called the bank shouting at them. ‘Why isn’t it working?’ and they say, ‘well, because you’ve got no money.” Then I was trying to make cuts to try and bring cash back in, but it was ridiculous. I messed up my taxes as well. Believe me, I made all of the mistakes!”

His entire story, found here, is worth a read.