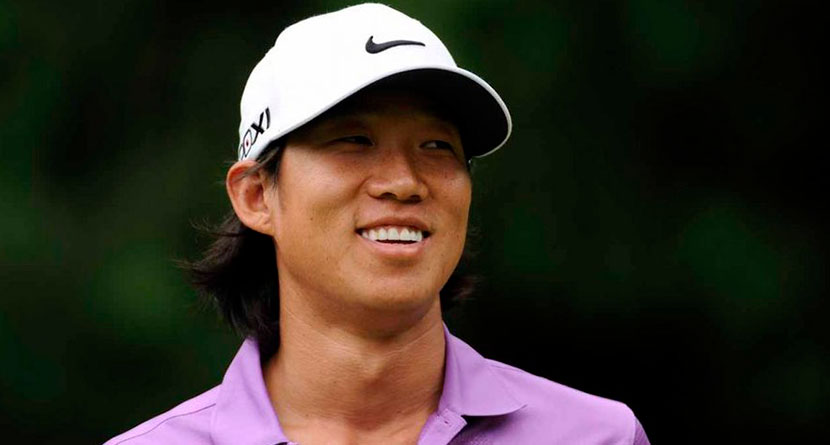 Fan Follows Up Finau Ballad With Ode To Kim

English golf fan Sam Harrop was determined to not be a one-hit-wonder.

After receiving acclaim for his Tony Finau-inspired rendition of REO Speedwagon’s “Can’t Fight This Feeling.” Harrop released his second “single” on Thursday, an ode to fan-favorite Anthony Kim.

Not quite sure how one is supposed to follow-up something like that Tony Finau video, but, well…here’s where I ended up.

And, if all else fails, I’m pretty sure I speak on behalf of the entire golf community when I say, AK – we want you back.

RTs appreciated, as ever ? pic.twitter.com/Q7VS1PmHtk

With a few cracks mixed in about Robert Allenby and Chesson Hadley, Harrop raised the bar once again, receiving accolades from the professional ranks from folks such as Eddie Pepperell and Peter Jacobsen.

“I am just going to soak in the atmosphere, my playing partners and fun to see what I can do with my game.”@pernillagolf will tee it up with the men this week at the @NZOpenGolf?️‍♀️@NZOpenGolf Story ⬇️ https://t.co/IajEwyk1UD

For the first time in the 101-year history of the event, a woman teed it up in the New Zealand Open this week. Pernilla Lindberg, the Swedish LPGA Tour major champion, accepted a sponsor exemption for the event, and despite missing the cut, accomplished her goal of finishing ahead of at least one man.

“We are delighted to have Pernilla join us,” New Zealand Open Chairman John Hart said. “It is a unique occasion for New Zealand Golf. She and her husband got married here and planned to come back for a first-year anniversary holiday and found out the tournament was on at the same time.

“Pernilla is here under a sponsor invitation spot and is here to have some fun and has already added so much to our tournament.”

He’s looped for @MarkCalc, Dan Forsman and @dottiepepper. But Greg “Piddler” Martin’s life after caddying has been all about the horses… including early 2020 @KentuckyDerby favorite “Tiz The Law.” https://t.co/PEr5zdjKO7

Second acts are never a sure thing, but former PGA and LPGA Tour caddie Greg “Piddler” Martin is in line for quite a successful one if Tiz The Law, the early favorite to win the Kentucky Derby, comes to fruition.

In a story for The Caddie Network, Craig Dolch details Piddler’s time on the PGA Tour, most notably on the bags of Dan Forsman and Mark Calcavecchia, and his wife Kathleen’s leap of faith into horse racing. Having owned stakes in Commanding Curve, the runner-up in the 2014 Kentucky Derby as a 37-1 long shot, the Race for the Roses won’t be Piddler’s first rodeo.

It can’t be considered an anomaly because, you know, these guys are good, but two sponsor exemptions — Tom Lewis and Harris English — are leading the Honda Classic after the first round, and a third, Lee Westwood, is only a shot back.

“I played the Monday pro-am, did a clinic on Tuesday, so I’ve felt like I’ve really been a part of the tournament this week, and it’s been awesome,” English told PGATour.com. “I feel really good about my round today. I didn’t hit it my best, but I knew it was going to be one of those rounds you’re going to have to grind it out. It’s windy out there, you’re going to have a lot of cross-winds, and it played really tough. My short game was on point, and I made some really good putts.”

Ironically, Westwood was one of only four sponsor exemptions to ever have won on the PGA Tour, and his laid-back approach has him in a good position after 18 holes.

“I think when you’re younger, you put a bit more pressure on yourself,” Westwood told GolfChannel.com. “You kind of forget that you’re playing a sport and playing golf, and it’s very unpredictable. You treat it too seriously, almost. I’m nearly 47, just out there having fun.”