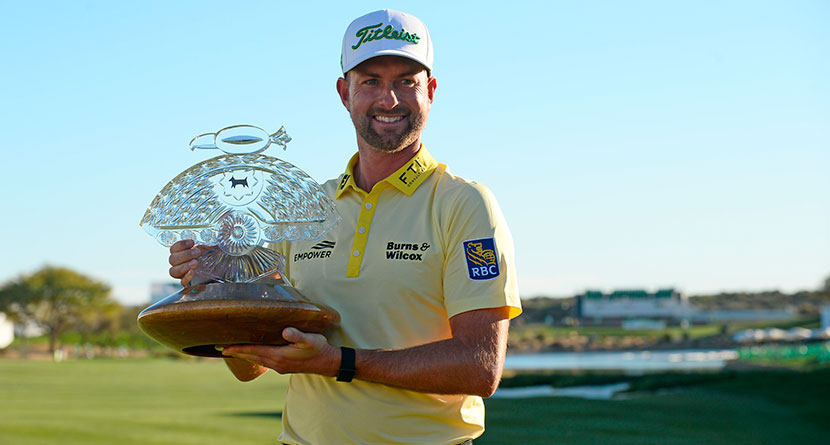 “I didn’t think it was over,” Simpson said, according to the Associated Press. “But I thought, ‘I’m going to really have to do something special to get back in it.'”

Simpson’s “something special” came on the 72nd hole as he rolled in a 17-foot birdie putt from the fringe to force Finau’s hand. The big Ute was unable to convert an eight-footer of his own to earn the victory, and Simpson made him pay as they played the 18th hole once again.

The win moves Simpson up four spots in the Official World Golf Ranking from 11th to 7th, marking the first time he’s cracked the top-10 in the world since his U.S. Open-winning season of 2012.

It had been more than five years since Graeme McDowell had hoisted a trophy on the European Tour, but he ended that drought on Sunday in Saudi Arabia getting up-and-down on the 72nd hole to secure a two-shot victory over defending champion Dustin Johnson at the Saudi International.

“It’s special,”McDowell said. “I’ve been working hard the last year and a half. I want to be back up there one more time, just to be able to play against these guys.

“The game of golf is in such great shape, there are so many great players in the world, it’s so exciting to be a top player in the world and I want to be back up there again.”

It was McDowell’s first Euro Tour win since the 2014 Alstom Open de France. He won on the PGA Tour last year at the Corales Puntacana Resort and Club Championship. With the win, McDowell moves from outside the top-100 in the world to inside the top-50, checking in at No. 47 on Monday.

The PGA Tour paid their respects to the late Kobe Bryant on Sunday of the Waste Management Phoenix Open by turning the famous 16th hole into a shrine to the recently-deceased basketball legend.

The Tour set the hole location on the par-3 24 paces on and eight from the left, an homage to Bryant’s two L.A. Laker jersey numbers. They also displayed the jersey numbers on either side of the pin flag and stenciled the numbers into the grass short of the green.

“We felt it was a nice touch and a touch of class,” PGA Tour vice president of rules and competition Slugger White said.

He just won in his 2nd career @ChampionsTour start.

For the first time since 2001, Brett Quigley made his way into the winner’s circle thanks to two solid closing pars to hold off Stephen Ames at the Morocco Champions on Saturday.

Quigley fired a final-round 6-under par 66 to chase down Ames, who held a three-shot advantage heading into the final round. It was Quigley’s first win in a PGA Tour-sanctioned since the 2001 Arkansas Classic on the Korn Ferry Tour.

“It’s been so long since I won a tournament,” Quigley said, according to the Associated Press. “Just incredible. It’s weird, I had a peace all week. I wouldn’t say I was nervous until the last hole here on my second putt, but just felt comfortable and just felt comfortable here in Marrakesh.”