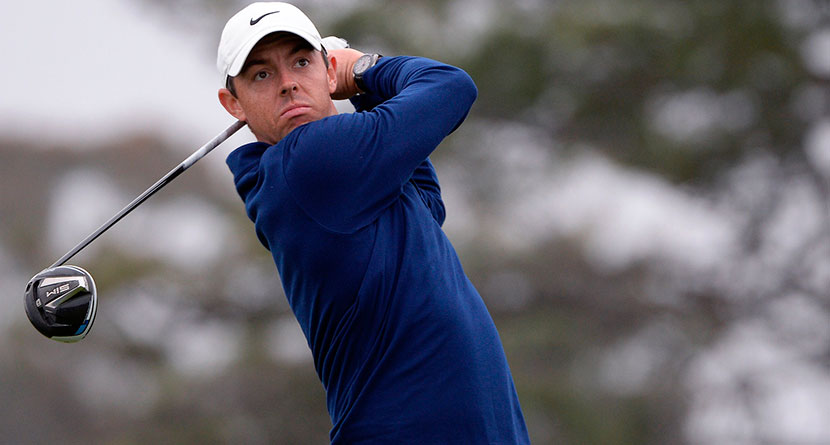 No Question Off Limits With Rory McIlroy

Rory revisited: No question off limits, no subject out of bounds as @PaulKimmage meets golfer of the decade @McIlroyRory #BigRead https://t.co/Vbc52FMPhZ pic.twitter.com/TnAZyBzGRU

Rory McIlroy has long been one of the most thoughtful and candid superstars in golf, so when he teams up with The Irish Independent’s Paul Kimmage for a question-and-answer segment, it’s must-read material.

In part one of McIlroy’s three-part sit-down with Kimmage, McIlroy opened up about his feelings on his game, his caddies, his personal life, Tiger Woods and winning a green jacket.

A sampling, re: his disappointing final round alongside Tiger at the 2018 Tour Championship:

“It’s the Tour Championship and I’ve got myself into another final group and I’m playing with Tiger Woods. It’s something you dream about growing up, final round, big tournament, Tiger Woods. I didn’t know if I would ever get this opportunity. It’s what I’ve always wanted to do. Brilliant. … I was never in the lead. I was always playing catch-up, but that’s beside the point. It’s the final group, Tiger, and I just want to give a really good account of myself. To take the fight to him. To make him work for it. If he wins, well, it’s not great, but it’s good for the game. And I understand the bigger picture, but I’m going to make him earn it. And I never made him earn it. That’s what bothered me. And what bothered me even more was I came away [thinking], ‘I know I can play better than that. I know I can beat him.’ But I’d made it too much about him, and not enough about me. … It was an opportunity to beat Tiger Woods and go down the stretch with him. ‘This mythical creature in the red shirt’. And I just didn’t get into the right place mentally.

“It’s tough. Everyone was like “Wasn’t that a great moment?” And I’m like, ‘No, it was f—— s—!’ It was terrible. I birdied the last to shoot 4 over! And I got the bigger picture that it was wonderful for golf, and I’m sure I’ll look back and think ‘That was pretty cool,’ but it hurt. It really hurt. I was probably the only one at East Lake that day that was disappointed.”

It’s not all hitting bombs and doing calf raises for Phil Mickelson these days. At 49-years-old and heading to the AT&T Pebble Beach Pro-Am to defend his most recent PGA Tour title, Mickelson claims to have found something in the Saudi Arabian desert last week that has him bullish on his next few weeks.

“It was so fun to be back in the mix,” Mickelson said after three under-par rounds at the Saudi International, which resulted in a T3 finish. “It’s been a while since I’ve been in contention. It’s been a while since I’ve been playing well and it feels really good. This has been a great week for me, a good step, and it was so fun coming down the stretch to feel the nervousness and the excitement and the opportunities.

“I haven’t been my best this last year since I won Pebble a year ago, and I’m excited to go back there next week with a little bit of momentum. I feel like I have been playing well, but yet I haven’t had the results. I missed a couple of cuts and this week I really started to put things together and it’s a great week to build off of.”

Knost Hanging Up Clubs For A Mic

It’s been a hell of a ride!! Can’t thank all my family, friends, and sponsors for all of their support over the years! I had the greatest job in the world for a very long time! Gonna miss competing out on the @pgatour with all my boys! Time for the next chapter!

Former U.S. Amateur champion Colt Knost announced his retirement from competitive golf after missing the cut at the Waste Management Phoenix Open on Friday. A wrist injury in 2016 derailed Knost’s best run of form as a pro, and he used his last start on a major medical exemption this past week in his adopted hometown of Scottsdale.

“The game has just changed so much. Guys hit it so far, and I don’t,” Knost said. “But you know, I’m excited for what I have ahead. It’s going to be fun. But, of course, I’m going to miss playing.”

Knost used his downtime rehabbing from injury to take the leap into another side of golf: the media. According to GolfChannel.com, Knost has accepted a position with CBS Sports as part of their broadcast crew, which he will do in conjunction with his radio show on SIRIUS/XM PGA Tour Radio.

Harold Varner made 32 consecutive pars at the Waste Management. That is unbelievable pic.twitter.com/E7h9mlT0IY

Harold Varner III didn’t play the weekend at the Waste Management Phoenix Open, but he did make some history en route to his early exit from the Scottsdale area.

Varner III made 18 pars in first round en route to a 71, and he began his second round with 14 more to break KJ Choi’s record of 27 straight to start a tournament at the 2006 Colonial by five holes.

“When I got done (Thursday) I was like, ’18 is enough.’ I was hoping we would just blaze the trail today,” Varner III said. “Obviously that wasn’t the case to start off.

Varner III finished his second round with a pair of birdies and a pair of bogeys to shoot a matching even-par 71 on Friday, which missed the cut by a stroke.