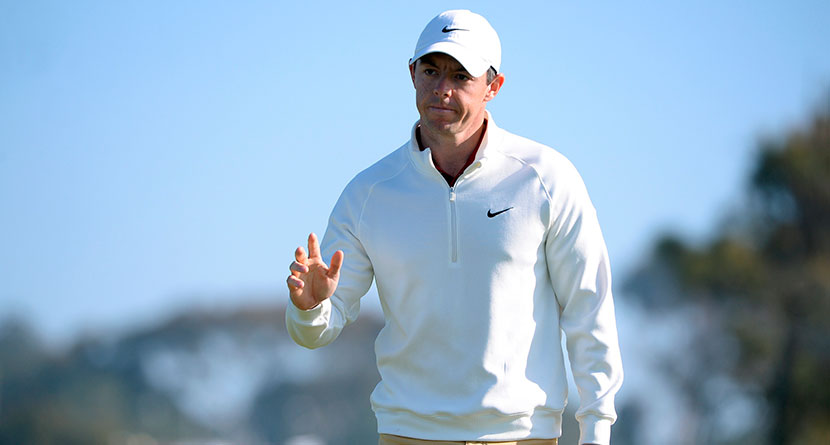 Rory To Ascend To No. 1 Without Swinging A Club

Rory McIlroy will return to the top of the world rankings next week for the first time since 2015, despite having a week off!

One of the quirks of the Official World Golf Rankings is that its two-year rolling average allows big changes to occur within the rankings even when the relevant parties are idle.

This week, that will be the case as Rory McIlroy will overtake Brooks Koepka as the top-ranked player in the world while both are presumably 3,000 miles away from Pebble Beach Golf Links at their respective homes in Jupiter, Florida.

“I think it’s always cool when you attain that ranking for whether it’s the first time ever or the first time in a while,” McIlroy said at the Farmers Insurance Open last month. “To be the No. 1 at whatever you do is a pretty cool feeling. It’s a very imperfect system. You know, even that is up for debate, you know, whether the players that are at — whatever their ranking are, whether that’s a true reflection of how the players rank in the game right now.

“Everyone has different opinions on that. I don’t think it irks me or gets me annoyed if I’m not holding that position. I feel like I go about my business and I try to do the right things all the time. If I play well enough for a sustained period of time, hopefully I get there.”

Golfer Makes Two Aces In One Round

Apologies in advance to those who haven’t felt the euphoria watching one of the tee shots find the bottom of the cup, but Gary Choyka cannot relate.

Choyka had not one, but two aces over the course of a single round of golf at the LPGA International’s Jones Course.

“You talk about experiences in golf. It has to be one of the best,” Choyka told USA Today.

“Golf is such a humbling sport,” Choyka, a retired school teacher and basketball coach from the Philadelphia area who carries a 10.5 handicap index, said.” You have your ups and downs. Fortunately, that day someone was looking down on me.”

He did try his luck at the lottery following his pair of aces. He didn’t win.

Men And Women Teeing It Up Together

“There’s more than just guys in the world…”

“The fact this only happens once in a year is just nonsense.”

The ISPS Handa Vic Open will once again take place this week, and once again be one of the most interesting golf tournaments on the calendar. The event simultaneously features the European Tour and the LPGA Tour playing the same course at the same time for the same amount of prize money.

The tee time times are staggered with a group of men teeing off, then a group of women, then another group of men, and so on. The event is played across two courses, the Beach and Creek Courses at Victoria Beach Golf Club.

The tournament will air on Golf Channel beginning at 11 p.m. EST on Wednesday.

Dustin Johnson’s bout with jet lag after flying some 17 hours from Saudi Arabia to Monterey, California has not dissuaded bookmakers from making the two-time winner of the AT&T Pebble Beach Pro-Am the betting favorite for the week at 13/2, according to Jeff Sherman, the Las Vegas Westgate SuperBook VP of Risk Management.

Behind him, California native Patrick Cantlay comes in at 12/1, Jason Day and Paul Casey check in at 20/1. Matt Kuchar, Matthew Fitzpatrick, and Brandt Snedeker are 25/1 and defending champion Phil Mickelson is joined by Viktor Hovland and Branden Grace at 30/1.