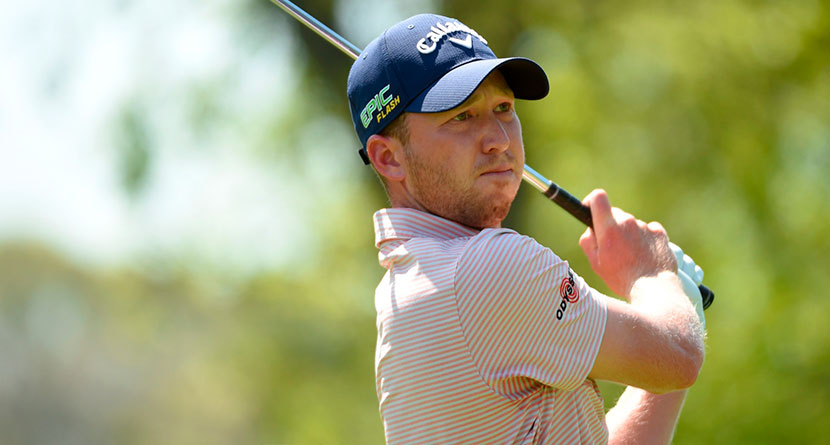 Daniel Berger is still playing irons that date back to his high school days — and he’s on the hunt for more on eBay. https://t.co/SWj20eAwl1

Last week, we brought you the story of former Masters champion Charl Schwartzel taking his equipment needs to the almighty Internet, and this week, two-time PGA Tour winner Daniel Berger is doing something similar.

Becoming an equipment free agent for the first time since 2016, Berger decided that going back to a set of irons he played in high school was preferable to trying to test out a whole bunch of new equipment.

“When my contract ended, I figured why go and test a bunch of new stuff when I have something that I already know works? It’s one of those comfort things,” Berger told Golf.com’s Andrew Tursky of his trusty TaylorMade MC irons, which were made in 2011. “When you have something that you like looking at, you might as well just stick with it.

“Back when I was using these irons, I had about three backup sets. I would just take out an iron when they got old and throw a new one in. I was just rummaging through my garage and I found a brand new set that was still in the box with the plastic on them. So I went with those.”

However, like some Nike staffers before him, finding new or even slightly used versions of these clubs can be hard to find nine years after they were released, but Berger had a two-pronged plan.

“I’m going to go on eBay and order as many sets as I can and ride ‘em out until I can’t find anymore,” Berger said.

The second part of the plan? Buy them from people in the comment section.

And @DanielBerger59 is already buying sets in the comments section of our latest Instagram post. I love this too much. pic.twitter.com/brQ9sZlJRe

The USGA and R&A’s joint Distance Insight Report release has been the talk of the golf world since the 102-page document was released on Tuesday, and while it’s mostly an exploratory effort at this point, two of the biggest professional Tours in the world were compelled to make a statement on the findings.

“Since 2003, we have been working closely with the USGA and The R&A to closely monitor distance, and this latest report is an expanded and thorough review of the topic, and others, which are all important to the game,” the PGA Tour’s statement said. “The R&A and the USGA are our partners, and the PGA Tour will continue to collaborate with them, along with all of our other industry partners, on the next steps in this process.

“We believe the game is best served when all are working in a unified way, and we intend to continue to approach this issue in that manner.  The PGA Tour is committed to ensuring any future solutions identified benefit the game as a whole without negatively impacting the Tour, its players or our fans’ enjoyment of our sport.”

The LPGA Tour took a slightly different stance, downplaying the role distance plays in its game, but similarly vowed to work in conjunction with the governing bodies.

“The LPGA is appreciative of the work that has been done by the USGA and the R&A through their Distance and Insights Project, and we are interested to see what comes out of the next phase of research and feedback,” the LPGA Tour’s statement said. “Regarding the elite women’s professional game, we do not see distance as a hindrance towards the growth of the LPGA tour or to the courses on which we can compete. However, the data shows there are some aspects of increased distance which are making the game more expensive and more difficult for recreational players, and we see opportunity in exploring ways to remove some of the longtime barriers of the game such as cost, limited teeing ground options, length of courses, time to play, etc.

“It is important to us, our LPGA Tour members, our LPGA professionals, our LPGA amateurs and the many girls who are being introduced to the game that there is a healthy future for golf and that the game can be more affordable and enjoyable for all who play it.”

The Sandbag Invitational Handicaps Are Out

Full-field tee times for all three rounds of the @attproam. All 156 pro-am teams are listed. pic.twitter.com/yK3FRvoX8U

One of the more interesting pieces of the AT&T Pebble Beach Pro-Am is the weekend coverage that inevitably shows the celebrity leaders hitting uncharacteristically incredible shots for the handicaps at which they are playing.

Every year, it’s the same story: celebrity with an over-inflated handicap rises to the top of the leaderboard, wins the crystal and there’s some small faux-outrage. Two years ago, it was NFL wide receiver Larry Fitzgerald’s 13-handicap (he’s an 8 this year); last year it was FedEx executive Don Colleran’s 13-handicap (down to a 12 this year).

So, who should we look out for this year? Bill Murray seems dangerous at a 16-handicap as does Steve Young as a 14. I guess we’ll have to wait and see who’s in the hunt come Sunday and hitting shots that would make the Tour pros jealous.

The ramped-up discussion on distance’s impact on the game at all levels has resulted in all the hot takes being made. Perhaps the hottest of them all comes, unsurprisingly, from Brandel Chamblee.

In a special two-hour edition of Golf Central on Tuesday, Chamblee came prepared with his usual fact-based opinions on the direction in which the game was going — dismissing Jaime Diaz’s common-sense point that improved equipment has closed the gap between the uber-elite players and the simply-very-good players because it has no basis on fact.

In an all-encompassing segment, Chamblee made the argument that golf on the professional level should do two things to combat the distance arms race: grow up the rough and/or reduce the game to 12 holes.

His first argument centered around the game we know today, but with souped-up conditions.

“As I read (the report), I found myself agreeing with some of the issues from a sustainability standpoint as the game continues to grow,” Chamblee said. “But I found myself differing in a lot of aspects of the report. Namely, I feel like the game is out of whack at the professional level in one way, and I think we do agree about this, the inability to play the game with great accuracy, what I would define as being outside the top 100 in driving accuracy and to be rewarded is out of whack.

“The golf ball can easily be constricted by raising the fairway heights, growing the rough and firming up the greens.”

For his second point, Chamblee went a little bit more outside the box.

“On the sustainability issue, real quick if I can, I’ll use a rowing analogy. You row forward by looking back,” Chamblee began on his 12-hole idea. “This game was 12 holes when it began, at the highest level it was 12 holes. For a dozen years it was 12 holes. The record was 149 and he won by 12, Old Tom Morris in 1870. Why is it 18? You want a smaller footprint, you want a faster round, why don’t we go back to the beginning of the game and play 12 hole golf courses?