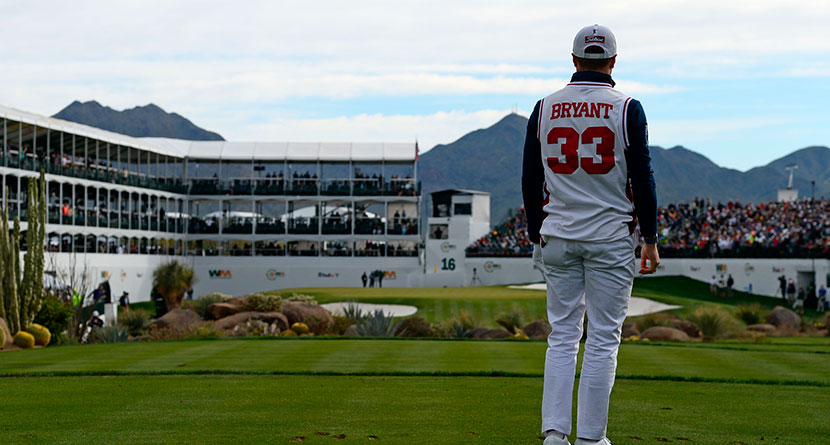 Justin Thomas will pay tribute to Kobe and Gigi Bryant this week at the Waste Management Phoenix Open with a custom set of wedges and putter cover.
(?:Instagram/@JustinThomas34) pic.twitter.com/exQ7C5NdFu

Among the flood of tributes made in honor of Kobe Bryant last week at the Waste Management Phoenix Open, Justin Thomas’ was near the top of the list.

The 26-year-old fourth-ranked player in the world not only donned Byant’s Lower Merion High School jersey during his playing of the 16th hole all four rounds en route to a T3 finish, he also had his wedges stamped to honor the Laker legend.

On Thursday, Thomas announced the wedge set, which featured four Titleist SM8 Raw Tour Issued Custom Vokey wedges, was up for auction, benefitting the MambaOnThree Fund, with all proceeds going to the families of the seven others who perished in the accident. The auction closes on Feb. 13.

All donations to the Fund will be directed to their families.

Check the link below for more ?? https://t.co/sHIYuqoLkp

For the first time since 2013, Rory McIlroy will be teeing it up at the Valero Texas Open, the tournament announced earlier this week.

McIlroy, who will supplant Brooks Koepka as the No. 1-ranked player in the world on Monday, is showing his cards a bit as it pertains to his Masters prep. Having said he prefers to play himself into competitive shape the week before a major championship when his schedule allows him to do so, the Valero is the last event on the PGA Tour schedule prior to the first major championship of the year.

McIlroy’s last appearance at the Valero yielded a runner-up finish to Martin Laird. The 30-year-old famously only needs a Masters victory to complete the career Grand Slam.

@PhilMickelson to USGA if it gives him a special exemption into U.S. Open if he needs it: No thanks. https://t.co/3YdtlYiEEU

Speaking of career grand slams, Phil Mickelson is one leg short of joining one of the most exclusive clubs in golf as well, but he doesn’t plan to accomplish that goal with a “sympathy spot” granted by the USGA via special exemption.

Mickelson’s 2013 Open Championship exemption into the four major championships expired in 2018, and as a winner of the other three, he doesn’t need to worry about getting into the field. As the 72nd-ranked player in the world, however, his spot in the upcoming U.S. Open at Winged Foot, site of perhaps his most famous near-miss, is in jeopardy.

“(The USGA has) never been an organization that likes to give out special exemptions,” Mickelson continued. ”I don’t want a special exemption. I think I’ll get in the tournament. If I get in I deserve to be there; if I don’t, I don’t. I don’t want a sympathy spot. If I am good enough to make it and qualify, then I need to earn my spot there.”

It’s a good attitude to have, especially given Mickelson hasn’t exactly been complimentary of the governing body as of late.

Jason Enloe resigned today from SMU—and, much like his life, it’s complicated. Grief. Burnout. And a family legal battle over a $500,000 life-insurance policy.https://t.co/q57DWPcNCn

An interesting story broke last week out of Dallas as Southern Methodist University men’s golf coach Jason Enloe submitted his resignation from his post amid personal struggles that centered around losing his wife last year and a subsequent half-million-dollar life insurance policy that is tied up in a legal battle.

GolfChannel.com’s Ryan Lavner breaks down the whole sordid ordeal of the he said-she said legal battle that includes a strained relationship with Enloe’s in-laws, who happen to include the wife of PGA Tour player Hunter Mahan.