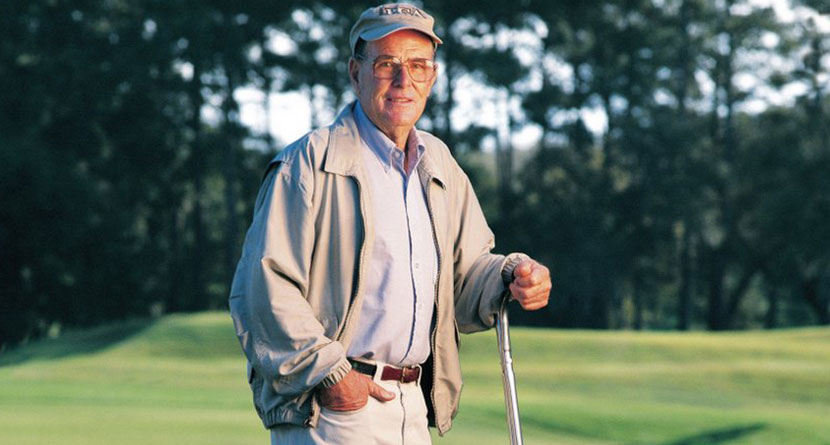 Your distinct personality, extraordinary vision and boundless passion brought life and creativity to every course you designed. We are eternally grateful for all you did for the PGA TOUR and the game you loved. https://t.co/hd5U4UQF70

Sad news broke late Thursday that the renowned golf course architect Pete Dye had passed away at the age of 94, less than a year after his wife of 68 years, Alice, passed away. Dye is best known for “building distinctive and difficult courses that could make both expert and average golfers scratch their heads in frustration,” according to PGATour.com’s obituary.

“We are deeply saddened to learn of the passing of Pete Dye, a true friend of the PGA Tour and one of the most important course architects of this or any generation,” PGA Tour commissioner Jay Monahan said in a statement.

He is survived by his two sons, Perry and P.B., both well-known architects in their own right.

Babygirl, we love you so much already and we just can’t wait to meet you this summer!! #BabyWest ??

News broke earlier this week that Michelle Wie was not healthy enough to play in the LPGA Tour’s season-opening event, the Diamond Resorts Tournament of Champions at Lake Buena Vista, Florida, due to continuing rehab on his nagging wrist injury.

According to GolfChannel.com’s Randall Mell, Wie was not expected to tee it up in the following week’s Gainbridge LPGA at Boca Rio in Florida, either. However, everything took a left turn when Wie took to Instagram on Thursday evening to share that she and new husband Jonnie West are expecting their first child this summer.

“Babygirl, we love you so much already and we just can’t wait to meet you this summer,” Wie captioned her announcement post, which featured a pair of infant Nikes, the couple’s dog and a Nike onesie.

He’s back. After an unexpectedly extended rehab from offseason surgery, Brooks Koepka announced this week that he’s going to be teeing it up in next week’s Abu Dhabi Golf Championship on the European Tour to kick off his 2020 campaign.

“Brooks’ rehab for his knee has gone great the past three months and he has met all of his physical therapy goals,” Blake Smith, Koepka’s agent, told GolfChannel.com. “He feels as good as he ever has and is excited to tee it up next week.”

Kopeka’s early-season schedule is coming into view as he will play in the United Arab Emirates next week, Saudi Arabia two weeks later in the Saudi International and then return Stateside for the Genesis Open (Feb. 13-16) and the Honda Classic (Feb. 27-March 1).

Collin Morikawa Leads Sony After Round One

The sea was angry yesterday, my friends. While some of golf’s best players were blown away by winds at Waialae Country Club, Collin Morikawa put together a superb bogey-free 5-under par 65 to take a two-shot lead at the darkness-suspended first round of the Sony Open in Hawaii.

Morikawa’s blemish-free card was aided by a solid day on the greens (2.595 strokes gained: putting) and ball-striking (13 of 18 greens) to take a two-shot advantage over a four-man group at 3-under par anchored by veteran Ryan Palmer.

“It’s tough out here,” Morikawa told PGATour.com. “If you have a 20-foot birdie putt, you’ve got to factor in the wind, the rain, everything. So playing last week got me prepared for today in the wind. ” think the harder conditions, the better for me. Ball-strikers just want to control everything — control the ball — and I had complete control today. That’s what you want to do.”