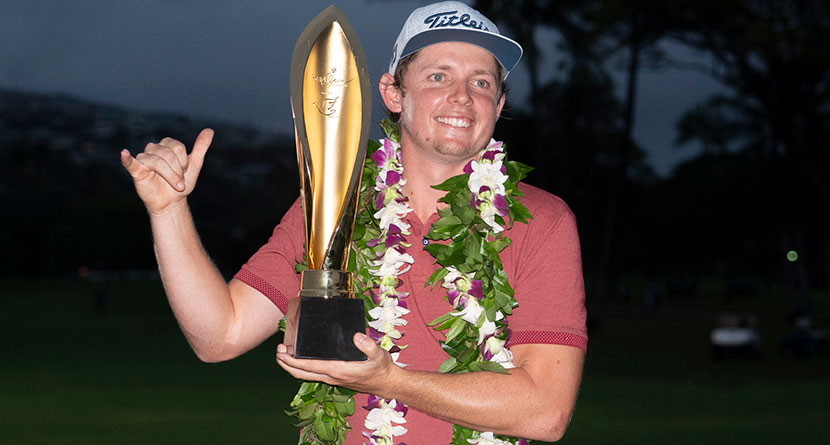 Liu Has History Halted By Injury

Unfortunately, Siyun Liu, who was on track to become the first female golfer to earn any status on a PGA TOUR-sanctioned Tour, has retired due to extreme arm pain.

We want to wish her all the best and a fast recovery as she looks to get healthy for her final season @WakeWGolf. pic.twitter.com/MuhmzVpfDU

Wake Forest senior Siyun Liu was all but guaranteed a place in golf’s history books as the first woman to earn status on a PGA Tour-sanctioned circuit after the 20-year-old played three rounds at the PGA Tour China Series qualifying tournament in 13-over par.

Needing to finish inside the top-15 to earn full status or inside the top-45 to receive conditional status, Liu was well within the number, but Liu was forced to withdraw before the final round due to extreme arm pain.

“I tried to push through. I didn’t think I would be able to finish today, and my dad told me to stop. Even after taking two sets of ibuprofen, I still had a lot of pain, but I wanted to finish the round and see,” Liu said. “Since my main reason for playing this tournament was to prepare for my spring (college) season, and with advice from my dad, I decided to retire. I really wanted to play, and it’s been very exciting, but I didn’t want my arm to hurt so much that if affects my spring season. I’m the captain, and I need to play for the team.”

Liu didn’t rule out a possible return to the PGA Tour China Series in the future.

Congratulations to Branden Grace, Marcus Armitage and Jaco Ahlers, who all qualified for The Open today.#SAOpen pic.twitter.com/nRk3pZAXYs

Branden Grace is one of those guys that always seems to be hanging around, and on Sunday at his national open, he did more than hang around; he went out and took the trophy.

Trailing fellow countryman and defending champion Louis Oosthuizen by three shots heading into the final round, Grace shot a 9-under par 62 to win the South African Open and punch his ticket to the Open Championship later this summer at Royal Birkdale.

“That was remarkable. I’m at a loss for words,” Grace said. “I can’t remember the last time the putter was that hot. You know I told my caddie on 16, said I’ve made six one-putts leading up to this hole on the back nine. So I’m good, this is the one I really wanted.”

The AT&T Bryon Nelson’s stint at Trinity Forest Golf Club will be short-lived.

PGA Tour officials have decided to move the event following this year’s event in May. https://t.co/x939WXvfek pic.twitter.com/tJVtNldJVU

In a move that’s sure to aggravate golf course architecture wonks, the PGA Tour is moving its annual AT&R Byron Nelson away from Trinity Forest Golf Club, the Bill Coore-Ben Crenshaw “neo-links” course that has hosted the event each of the last two years, according to The Dallas Morning News.

“I’ve been counting the days that this would happen,” PGA Tour pro and Texan Ryan Palmer told Golf.com. “I may get in trouble for saying this, but there was no energy, no excitement, and no crowds to watch. We went from the No. 1 Tour event in excitement and charity giving to wherever we are now. This had to happen.”

Trinity Forest will host for the final time this summer. The event is expected to return to TPC-Four Seasons Resort, the host of the event for 35 years.

Unfortunate to see @dallasnews report that the Nelson is leaving Trinity Forest after just 3 years. Logistics there aren’t ideal, and May in Dallas rarely equates to firm & fast. But golf fans are well-served when top players face outside-the-box venues like TF.

Smith Comes From Behind To Win Sony In Playoff

We did it!! We were able win the @SonyOpenHawaii AND raise $10,500 for relief efforts in Australia!

I hope this brings some joy to everyone back home. We are all going through some tough times, but hang in there. ???? pic.twitter.com/t2ZiZdo7b6

Cameron Smith came from three shots back, including a two-shot deficit with two holes to play, to defeat Branden Steele in a playoff to capture the Sony Open in Hawaii on Sunday night, Smith’s first individual victory on the PGA Tour.

Smith finished par-birdie to erase Steele’s two-shot cushion over the final two holes, and following Steele’s missed par putt on the first playoff hole, Smith only needed to two-putt from inside 15 feet to claim the victory.

With his native Australia battling a bushfire crisis, the 26-year-old pledged to donate $500 for every birdie and $1000 for every eagle he made in the tournament.

“Every birdie putt I had, just meant that little bit more. Rather than kind of wanting to make it I almost felt like I had to make it,” Smith said. “I’ve always been quite good at not giving up. I’ve never felt the need to kind of mentally check out in any way. It was a big fight all week basically.”