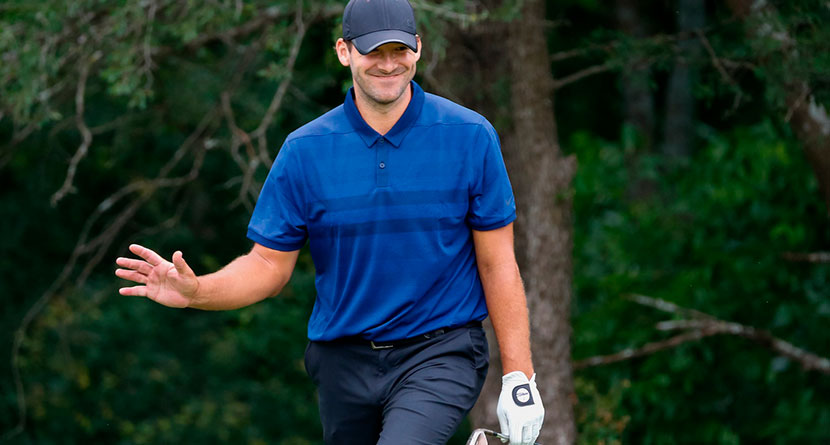 Romo, who currently works for CBS, is reportedly in talks with ESPN for a massive deal. https://t.co/KcHj7xtWWm

Reports surfaced on Sunday that ESPN was making a big according to a report by Mike McCarthy of Front Office Sportsmove to land former Dallas Cowboys quarterback and sometime-competitive amateur golfer Tony Romo. How big? $10-14 million per year big,

Fetching that kind of cash to call one game per week for the Worldwide Leader wouldn’t be a great return on investment, even if it was Monday Night Football, so Golfweek.com’s Todd Kelly prognosticated that it wouldn’t be out of the realm of possibility to see Romo on a golf broadcast.

“He’d likely take over the Monday Night Football analyst gig. He might also be the lead analyst on a Sunday game, should ESPN muscle their way into a NFL spot it currently doesn’t hold. And for that kind of money, Romo is likely to be everywhere ESPN is, maybe even a golf telecast,” Kelly wrote.

All Justin Rose wanted to do was post his Masters Tournament invite on social media and get a few likes. That can’t happen with Phil Mickelson roaming around these internet streets.

“Win it once (or three times) and you get that EVERY YEAR,” Phil wrote. “Just saying.”

Everyone is after the newest, latest and greatest, and while Rickie Fowler has an enviable golf swing of his own, Matthew Wolff has won more recently on Tour. This is all obviously tongue-in-cheek, but it’s pretty amazing just how on-point Fowler’s impression of Wolff’s unique move is.

Shot by Wolff’s swing coach, George Gankas, Fowler’s live impression of his Oklahoma State protege looked like it wasn’t the first time Fowler had tried the move out. It’s fun to imagine Rickie sitting at his palatial estate in Florida and practicing Wolff’s swing a la Shooter McGavin in Happy Gilmore.

Cameron Smith’s Tools Of The Trade

For the first time by himself — he won alongside Jonas Blixt at the 2017 Zurich Classic — Cameron Smith made his way to the winner’s circle on the PGA Tour. The 26-year-old from Brisbane used a Titleist setup to get him across the line.

Here’s what he’s got in his bag, courtesy of GolfWRX.com.