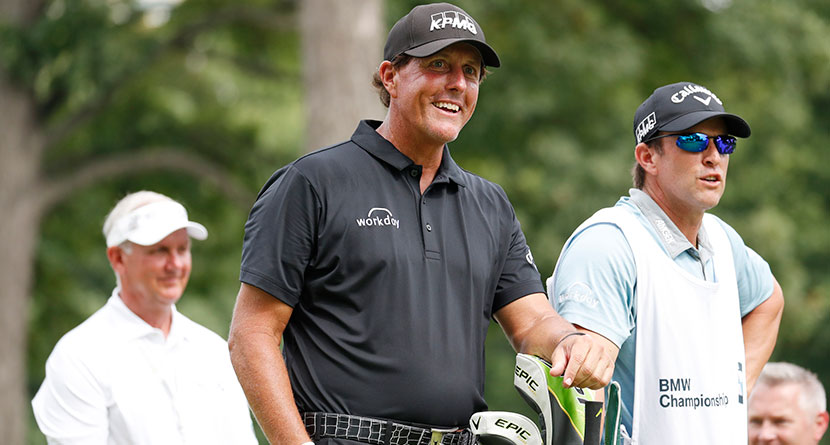 Phil Mickelson, a lifelong Californian, tells https://t.co/zMCVGnUJb1 that he has closed on a lot on Jupiter Island, Fla. Plan is to move there in a year, when his son graduates high school. #juplife https://t.co/PxtDxr9kwu

One of California’s favorite sons is heading to the income tax haven that is Florida. Speaking to GolfChannel.com’s Rex Hoggard on Wednesday at The American Express, Mickelson confirmed that his family closed on a lot on Jupiter Island just before Christmas and the plan is to move his family there next year following his son’s high school graduation.

Mickelson, one of the wealthiest golfers on the planet, has been hinting at this move for years, saying in 2013 that he estimated his tax rate could be going above 60%.

“There are going to be some drastic changes for me because I happen to be in that zone that has been targeted both federally and by the state and, you know, it doesn’t work for me right now,” he said in six years ago. “So I’m going to have to make some changes.”

With the move, Mickelson will find himself in one of the most popular golf scenes on Tour with new neighbors like Tiger Woods, Dustin Johnson, Rickie Fowler, Brooks Koepka and many more.

.@CallawayGolf rep confirms they did not renew Sergio’s deal for 2020, but “parted on great terms and the option for Sergio to carry Callaway equipment in the future remains.”

As many of the European Tour’s biggest stars make their 2020 debut this week in Abu Dhabi, the equipment roulette wheel has kicked into overdrive. Among the biggest surprises was Sergio Garcia being spotted with a mixed bag of equipment during a promotional event on Tuesday. With Callaway for the last two years, Garcia said that the split was mutual.

“Things happen, and many of the things that Callaway wanted me to do, I couldn’t agree to them,” he said. “Unfortunately we thought the best thing to do was to go our separate ways. There’s no hard feelings on any side. At the end of the day, what I want to do is go out there and enjoy what I do. Unfortunately, it just wasn’t the fit that we thought it would be for me.”

“I can confirm Callaway did not renew its agreement with Sergio for the 2020 season,” a Callaway rep told Golf.com’s Jonathan Wall. “We parted on great terms and the option for Sergio to carry Callaway equipment in the future remains.”

Garcia added in separate interviews that a big piece of his decision to become an equipment free agent was being able to return to the TaylorMade golf ball he had played for years before signing with Callaway.

Mexico’s Abraham Ancer has some good feelings coming into this week’s The American Express in Palm Springs. Having played well in the Presidents Cup and ranked No. 39 in the world, Ancer is a 40/1 shot to win this week, according to Vegas sportsbooks.

However, he’s got some momentum on his side as his caddie, Dale Vallely, was part of a group of caddies who took part in a Caddie Par-3 Tournament on Tuesday evening under the lights at The Lights at Indio Golf Course. Playing the 162-yard par-3 9th hole, Vallely pulled a 7-iron and flagged it with The Caddie Network on hand to document it all.

The reaction on the tee was muted except for one eagle-eyed observer, but when Vallely got to the green the ball was in the cup. Decent start to the week.

Decent start to the week.

Two Gloves Wins In The Bahamas

Less than a week after being arrested for soliciting a prostitute, Tommy “Two Gloves” Gainey went on to earn Korn Ferry Tour status at the PGA Tour’s Triple-A qualifying school. Just over a month later in his first start on the circuit in 2020, Gainey won The Bahamas Great Exuma Classic at Sandals Emerald Bay.

For the first time since 2012, Tommy Gainey is a winner, taking the the Korn Ferry Tour’s season-opener.

“With the injuries that I’ve been through, the other troubles that I’ve had, I’m very lucky and very blessed,” he said. “This means everything.” https://t.co/BjsZ909bbi pic.twitter.com/yP5k56IGZu