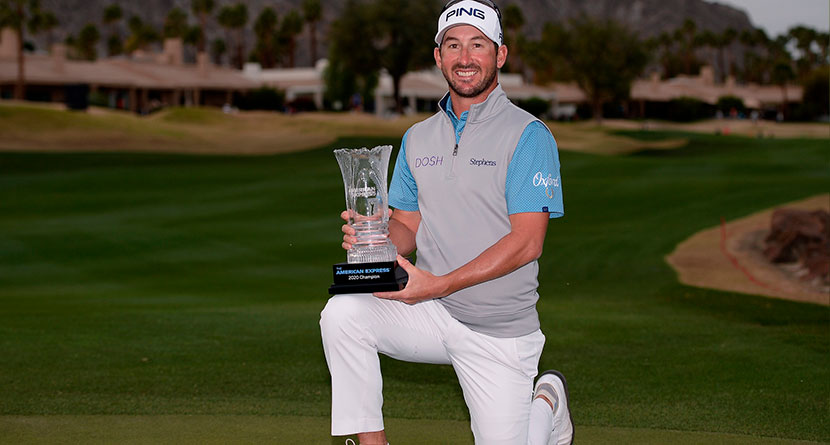 Andrew Landry had missed his last five cuts on the PGA Tour, and while missing the weekend is obviously frustrating, blowing a six-shot lead on Sunday at The American Express would have stung in a different way.

Coming into the final round tied with Scottie Scheffler, Landry played the first 12 holes in 6-under par to open up the comfortable margin only to see it all disappear as he bogeyed three consecutive holes on the back nine. While Landry was languishing, Abraham Ancer was charging, playing the eight-hole stretch between Nos. 4 and 11 in 6-under par.

With his lead gone, Landry stepped up and hit the shot of the tournament, a tee shot on the par-3 17th hole to six feet to make birdie and take back control of the event. He birdied the 18th hole as well to give himself a two-stroke victory, the second of his PGA Tour career.

“It feels great,” he said. “Winning out here is hard.”

With his victory in Abu Dhabi, Lee Westwood has now won in four different decades. European Tour title No. 25. pic.twitter.com/JxZ3Xb3L6h

Like a fine wine, Lee Westwood is only getting better with age. Despite falling as low as No. 125 in the Official World Golf Rankings in the last two years, Westwood has shown some incredible form over the past few months and he capped off his run by winning the Abu Dhabi HSBC Golf Championship on Sunday by two strokes over Tommy Fleetwood, Matthew Fitzpatrick and Victor Perez.

The win was Westwood’s 25th on the European Tour and his first since the 2018 Nedbank Challenge. He also became just the third man to win across four decades on the circuit.

“I can’t believe I’m that old,” Westwood said just a few weeks shy of his 47th birthday. “It’s getting harder. It’s just nice to come out and keep proving that you’ve still got it.”

Matt Kuchar found himself tied with defending champion Jazz Janewattananond at the Asian Tour’s Singapore Open on Sunday after the American saw his three-shot lead disappear following a costly triple-bogey eight on the par-5 7th hole.

“Strange things happen on the golf course, but I was able to regroup straight away,” Kuchar told reporters afterward. “My caddie [John Wood] also had a few quick words, telling me not to let that rattle me. It was us remembering that there is still a lot more golf to play.

“In life, you have a lot of similarities in that you face some difficult times, and it’s how you persevere, how you overcome those things that counts, so I certainly was awfully proud to be able to regroup and overcome that triple bogey.”

Kuchar was able to battle back and play bogey-free the rest of the way to best Justin Rose and Janewattananond by three strokes.

The playoff between @GabyLopezGOLF and @nasagolf7355 was suspended on Sunday due to darkness.

Play will resume at 8 am ET on Monday morning.

The first tournament of the LPGA Tour’s 2020 season will be decided on Monday… hopefully.

A five-hole playoff wasn’t enough to crown a winner at the Diamond Resorts Tournament of Champions on Sunday. Nasa Hataoka and Gabby Lopez will pick up where they left off on Monday morning.

The pair were joined by Inbee Park in a three-way tie for the lead after 72 holes, but Park bowed out after hitting her drive on the third playoff hole into a penalty area.

Congratulations to John Smoltz on defending his title in the Diamond Resorts Tournament of Champions celebrity division ? #DiamondLPGA pic.twitter.com/8EHlAkhgWQ