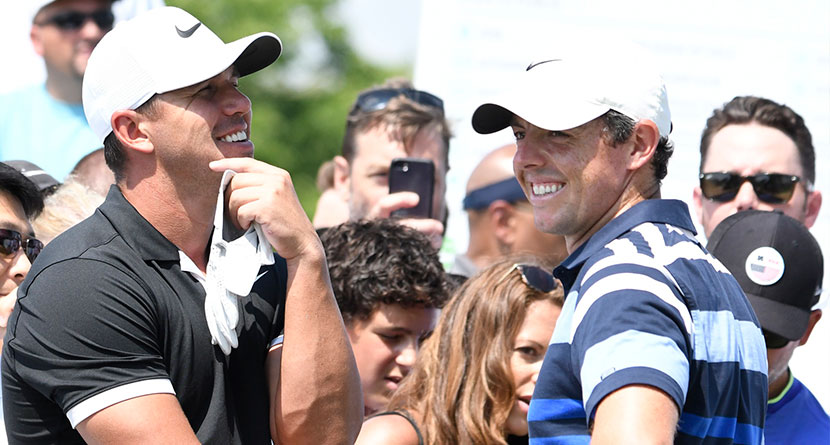 Winning on the PGA Tour definitely has its perks.

Andrew Landry came into this past weekend’s having missed his last five cuts and seven of his last eight, but a Sunday in the desert that saw Landry build a big lead, lose it and then regain it down the stretch was the difference between $1,206,000 and $730,300.

Nobody said it was gonna be easy! Had to dig deep for my 2nd @PGATOUR win! ??

None of this would be possible without my family, team, fans, volunteers and everyone who was part of @theamexgolf. Thank you for the support! What an amazing week! ? pic.twitter.com/eGsiBb65Nu

Click here to see the final leaderboard and what everyone got paid.

It took 18 holes, seven sudden-death playoff holes and a night of sleep in between before Gaby Lopez could make her 25-foot birdie putt to win the Diamond Resorts Tournament of Champions on Monday morning in brisk temperatures.

Nasa Hataoka had a chance to send the tournament to an eighth playoff hole, but her 12-foot birdie putt missed to give Lopez her second win on the LPGA Tour.

“I proved to myself that I can win in any situation,” Lopez said. “My first win was in the lead. My second win was coming from behind. And being able to put all those moments together and recall them while I’m walking on the fairway here and try to stay patient. That’s what I proved to myself the most, my ability to stay in the moment.”

Rory Can Take Over No. 1 This Week

The Rory McIlroy-Brooks Koepka is it or isn’t it a rivalry could get a little more interesting this week should the reigning PGA Tour Player of the Year pick up a victory at Torrey Pines. With the victory, he would take over the No. 1 ranking in the world.

McIlroy, who is making his first start of the calendar year, tied for fifth in his first appearance in the Farmers Insurance Open last year. Koepka isn’t in the field.

Koepka has held the No. 1 spot in the world since May of 2019, but injury and only eight tournaments have allowed his stranglehold to loosen. McIlroy hasn’t been No. 1 in the Official World Golf Rankings since September of 2015.

17-year-old Abel Gallegos came from three strokes back of 54-hole leader Jose Vega to win the Latin American Amateur Championship, which earns him a spot in the 2020 Masters and the 2020 Open Championship.

“It’s incredible,” Gallegos said. “I think I’m in a dream. It’s an incredible moment. I dedicate the win for all of Argentina.”

Ranked 460th in the World Amateur Golf Rankings coming into the week, Gallegos became the first Argentinian to win the prestigious championship.