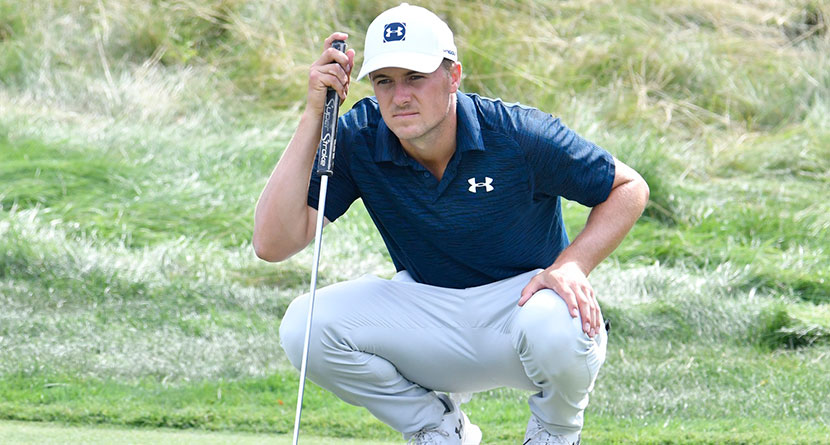 Jordan Spieth hasn’t won on the PGA Tour since his Open Championship win in 2017, which seems like ages ago for the can’t-miss Golden Child. However, after three months off, Spieth returns this week at Torrey Pines for the Farmers Insurance Open with a blank-slate mentality and goals of making the Ryder Cup team later this year.

“I kind of feel blank-slated here,” Spieth said on Tuesday. “I’m almost approaching it like I did in 2013, where I was kind of hopefully ready to kind of bounce back to where I’ve been in the past. That doesn’t mean it’s going to happen right away, but kind of build to that. I feel like I got out of the fall tournaments what I wanted to, to an extent. It was a little trial and error and I was able to have some time to rest and then recover and then practice gearing up.

“Big picture, I have a really good frame of mind, which should allow me to build some patience into getting my game where I want it to be.”

Spieth, who has fallen to No. 45 in the Official World Golf Rankings, will tee off on Thursday alongside Jason Day and defending champion Justin Rose at 10:30 a.m. PST on the South Course.

World Golf Hall of Fame reduces minimum age for induction to 45. It increased the minimum age from 40 to 50 in 2016. In other news, Tiger turns 45 in December.

For the second time in five years, the World Golf Hall of Fame has changed its eligible induction age. In 2016, the WGHOF changed the requirement from 40 to 50 years of age, and beginning in 2021, that eligible age will come back down to 45.

“Recognizing the game’s greatest players and contributors is an important endeavor and one our sport takes very seriously,” Jay Monahan, the PGA Tour’s commissioner and chairman of the World Golf Hall of Fame board, said on Tuesday. “We are committed to regularly evaluating the selection process to ensure we approach it with both historical context and the future in mind.”

The most notable names of those now eligible under the new age requirement is Tiger Woods, who will turn 45 years old in December of this year. Wonder if he’ll get the 100% vote that Derek Jeter couldn’t?

Jason Day and Jordan Spieth return to action this week, ranked Nos. 44 and 45 in the world respectively. Both former No. 1s need to stay inside the top 50 next month to qualify for WGC-Mexico.

Jason Day withdrew from the Presidents Cup late last year to deal with a nagging back injury that has followed him for the bulk of his career. Sidelined and watching from his home in Ohio, Day said he was upset he couldn’t have been a part of the action.

“Every time I would watch the Presidents Cup coverage, I was angry,” Day said Tuesday. “I had to go up to the barn to kind of either ride or do some sort of exercise to get some frustration out, because I really wanted to be there.”

(“The barn,” it should be noted, is a golf sicko’s paradise that he had built on his property in Ohio. Take a look.)

“Watching it over here and seeing how it finished up, it would have been nice to finish really, really close,” he said. “It was fun to watch, but I was quite frustrated sitting on my backside watching it.”

Day reported having rehabbed his injured back for the past eight weeks and will begin his 2020 campaign this week at the Farmers Insurance Open at Torrey Pines.

One of Golf Channel’s mainstays over the past seven years has been Matt Ginella. The travel insider joined GC in 2013 after stints at Golf Digest and Sports Illustrated.

“Exciting stuff on the horizon for both me and them. You’ll continue to see some of my content on the Golf Channel as I explore other options, possibilities, partners and stories within the world of golf and beyond. Thank you for your support. See you on the first tee.”