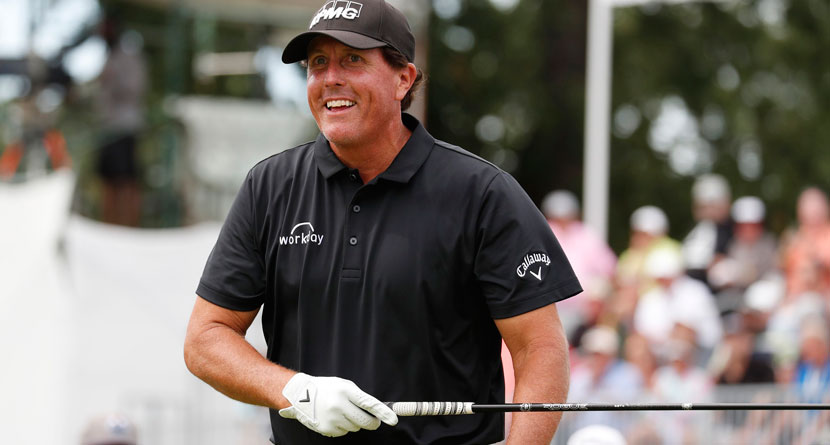 Don’t expect DeChambeau and Koepka to put the ? on.

Bryson has downplayed any feud with the World No. 1: https://t.co/u0Cp751noJ pic.twitter.com/3H5i4VcsNi

In one of the most predictable endings ever, Bryson DeChambeau opted to downplay his internet spat with Brooks Koepka. You’ll recall that the two — who have a rather contentious history — traded barbs over their physical appearance in the last week that resulted in Koepka shutting down DeChambeau with a “scoreboard” tweet that pointed to his four major championships as “2 short of a 6 pack.”

You were right @b_dechambeau I am 2 short of a 6 pack! pic.twitter.com/aCJ1jimId6

This week in Dubai, where he is defending his Omega Dubai Desert Classic victory, DeChambeau downplayed any feud between the two.

“It’s all good fun,” DeChambeau told reporters. “I’ve seen Brooks, actually, where I’m staying over the past few days. Everything is fine. It’s not a big deal. There’s a reason why he’s No. 1. I’ve got nothing but respect for him, and he knows that. I think everybody should know that. I’m just trying to do my best each and every day, as he is. All of my mind is taken up with the need to do well in the majors. That’s what I haven’t done particularly well in my career so far, and I am keen on changing that.”

There may not be a more on-brand sentence ever written than the one above this one.

Phil Mickelson partnered with Melin Headwear, a premium hat company, to endorse hats that go for upwards of $70 after shipping and handling. Phil will wear the A-Game Hydro, “a hat that helps (him) excel on the course and look great off of it.”

The hat is available online and in high-end golf resorts such as Bandon Dunes, Pebble Beach and Pinehurst, according to Golf.com.

Jared Wolfe is in prime position to earn a PGA Tour card in 2020-21 thanks to his four-shot win at the Bahamas Great Abaco Classic at Baha Mar on Wednesday. It was the first Korn Ferry Tour win of the 31-year-old’s career.

“I had a chance for it to go the other way, and I just made a lot of 3-4 foot putts which were not easy out here. If those don’t go in, it’s a different story,” Wolfe said, according to GolfChannel.com. “But I’m just beyond happy with how I fought and I’m very thankful for the blessing and the opportunity just to be in this position today.

“We’re all on the same journey, it just takes different time to get there. Being in position to win multiple times down there has really calmed me down. I obviously felt nervous today, but I felt a pretty good calmness pretty much all day, and I attest that to the experience down there.”

Kerr Not Going Out Without A Fight

.@CKGolferChic is fired up & a little insulted feeling like people are writing her off. https://t.co/nN4mKKZYC0

The 42-year-old Kerr is starting her 24th year on the LPGA Tour this week at the Gainbridge LPGA at Boca Rio about an hour from her childhood home, and she has the fire reignited in her belly after missing out on some big events last year.

“I’m fired up,” Kerr told GolfChannel.com. “I feel like people have written me off, and they shouldn’t do that. I’m not done. I want to go out on my terms. I’m definitely recommitted. I’m hungry, probably more than I have been in the last four or five years.”

Kerr’s main motivation comes from being left off the Solheim Cup team last year, a decision made by Juli Inkster that while Kerr may not agree with, she understands.

“I harbor no hard feelings toward Juli,” Kerr said. “She did what she thought she had to do to win. Someday, I’ll probably be a Solheim Cup captain, and I’ll have to make a tough decision like that.

“But it was just hard seeing one captain believe in the experience of a player, and seeing that pay off, seeing Suzann come through in the end. It was hard seeing Suzann make that putt, believing I had something to offer our team.”