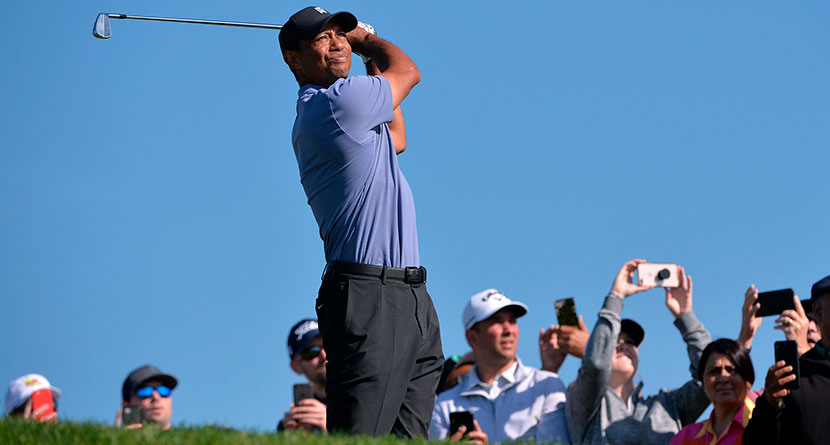 Tiger And Rory In The Mix At Torrey

Both making their first start of 2020, Tiger Woods and Rory McIlroy got off to solid starts on Thursday at the Farmers Insurance Open at Torrey Pines. Playing in consecutive groups on the North Course, McIlroy fired a 5-under par 67 that featured seven birdies against just two bogeys, putting him one shot back of first-round co-leaders Keegan Bradley and Sebastian Cappelen.

Woods started slowly, failing to birdie the par-5 10th hole and bogeying the short par-4 11th, but bounced back by playing his next 16 holes in 4-under par to sit in a tie for 21st.

“I kind of just chipped it around a little bit today and I didn’t quite let it go,” Woods said. “I felt like I just had to miss the ball in the correct spots, which I was able to do all day today.”

Both will play the tougher South Course on Friday. Click here to see the full leaderboard.

England’s Andy Sullivan won’t be teeing it up in the second round of the Omega Dubai Desert Classic after a scoring error got him disqualified. A first-round of 5-over par 77 was wiped off the board after Sullivan signed for 4-4 on holes 15 and 16 instead of his actual scores, 3-5.

Thomas Pieters took the first-round lead thanks to a first-round 5-under par 67. Click here to see the full leaderboard.

Finau Drops Out Of Saudi Event

The controversial Saudi International, which will be played next week at Royal Greens Golf & Country Club, will be without one previously-committed big-name U.S. player.

Tony Finau announced in a series of tweets on Thursday that he was dropping out of the event due to familial responsibilities, but vowed to return to Saudi Arabia next year.

this decision making process, and I truly appreciate how gracious and understanding they have been of my circumstances. They have subsequently extended an invitation to me for the 2021 Saudi International, and I am pleased to accept that opportunity.

To the golf fans of Saudi, I regret that I won’t be seeing you this year, but I eagerly anticipate the opportunity to do so next year. In the meantime, I want to wish all the players, sponsors, and fans a fantastic week. I will see you in 2021!

After 19 years as a professional and 18 years on the LPGA Tour, Natalie Gulbis announced in a co-authored piece on Golf.com that she would be retiring from professional golf after this season.

Gulbis went on to say that she actually planned to retire 10 years ago after back troubles sidelined her for significant times, but after four surgeries, her back feels “fantastic — it’s strong and pain-free,” but lingering issues have diminished her as a player.

Gulbis’ lone win on the LPGA Tour came at the 2007 Evian Masters.