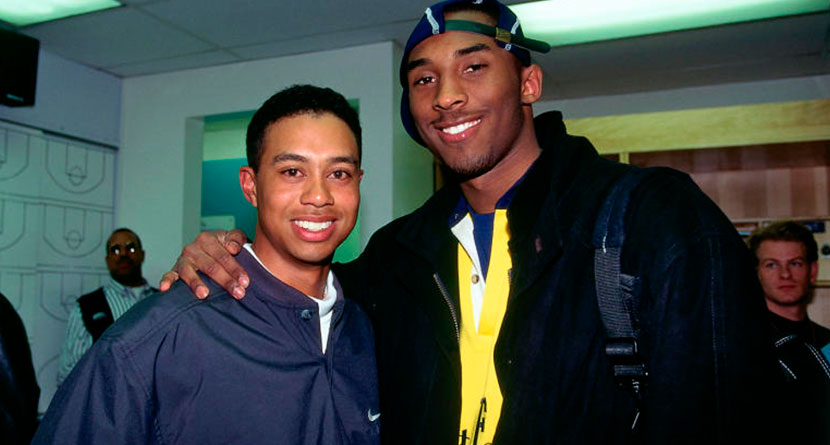 It was a surreal day on the grounds of Torrey Pines, just 110 miles south of the Staples Center where Kobe Bryant played 20 years for the Los Angeles Lakers.

As news spread around the grounds of the NBA legends tragic death in a helicopter crash, some players competing in the final round of the Farmers Insurance Open learned of the news mid-round, while others, like Tiger Woods, weren’t informed until hours later when their rounds finished.

Other tributes to Bryant came in from all across the golf spectrum. Here is a sampling.

Kobe Bryant was my HERO growing up. Even to this day he was an inspiration to the way I approached things. I woke up every day and saw this quote every time I opened my phone. His mentality motivated me not only in hard times but throughout my whole life. RIP, Kobe. pic.twitter.com/VtoYenQaYt

Love basketball. Even bigger fan of excellence. @kobebryant embodied excellence. Legendary talent; inspirational athlete; great role model; American icon loved globally. Sports lost a tremendous friend but don’t have to be sports fan for your heart to hurt. Just have to be human!

Mourning with the rest of the world the tragic loss of the legend Kobe,his daughter Gianna, and all of the other passengers. This is just devastating and there are no words to describe the sadness and loss we are all feeling. We are so so sorry.

This, from @maxhoma23, helps summarize why this Kobe news is so shocking:

“He was Superman. He played basketball with about 8 broken fingers. He shot free throws with a torn Achilles. It’s hard to imagine he could have the sniffles, let alone have something like this happen.”

Just spoke to a shaken Jason Day right after he heard the Kobe news in scoring tent:

“It makes you physically sick…he was a young man, in the prime of his life, doing amazing things off the court. There are no words.”

I heard the news on the 11th tee today. We’ve lost a great man, an incredible athlete, a legend. His daughter and the others that were lost… it’s unimaginable. My prayers go out to all their families. Thankful for all we have to remember you by… RIP Kobe

It wasn’t conventional, but it worked.

On Australia Day, Marc Leishman only managed to find three fairways on Torrey Pines’ South Course, but he was able to hit 14 greens and pick up 4.778 strokes on the field average on the green to shoot a 7-under par 65 to come from four shots back to defeat Jon Rahm and claim the Farmers Insurance Open.

“Pretty amazing, particularly all the problems that have been happening back in Australia with the fires and people losing their lives, firefighters. Just devastating really,” Leishman said of winning on Australia Day.  “If this can bring them a little bit of joy, that’s a big win for me personally and then for them as well.”

The win was Leishman’s fifth of his PGA Tour career, and his most recent since the 2018 CIMB Classic.

Before Marc Leishman won the Farmers Insurance Open in California, his fellow countryman Lucas Herbert had already delivered a victory on the European Tour for the nation that has been devastated by brush fires over the past few months.

Taking Christiaan Bezuidenhout to a second playoff hole after hitting his approach in the water on the first, Herbert made birdie on the par-5 18th hole to secure his first victory on the European Tour as well as the first win by an Aussie in 20 years on the circuit.

With this to build off, what does Herbert think he’s capable of in 2020?

“A hangover tomorrow,” he said with a laugh.

Madelene Sagstrom won the Gainbridge LPGA at Boca Rio on Sunday, but not in the fashion in which she would have liked.

Sagstrom got off to a rocky start, but steadied the ship and birdied the par-3 17th hole to tie Japan’s Nasa Hataoka. After Sagstrom made a five-footer for par, she appeared to have every intention of going to a playoff, but Hataoka missed her three-foot par putt, handing the title to Sagstrom.

“It doesn’t matter how you start,” Sagstrom said. “If you just continue fighting, things can go your way. And I just told myself, ‘Keep fighting, keep fighting.'”

It was the 27-year-old Swede’s first LPGA Tour title.