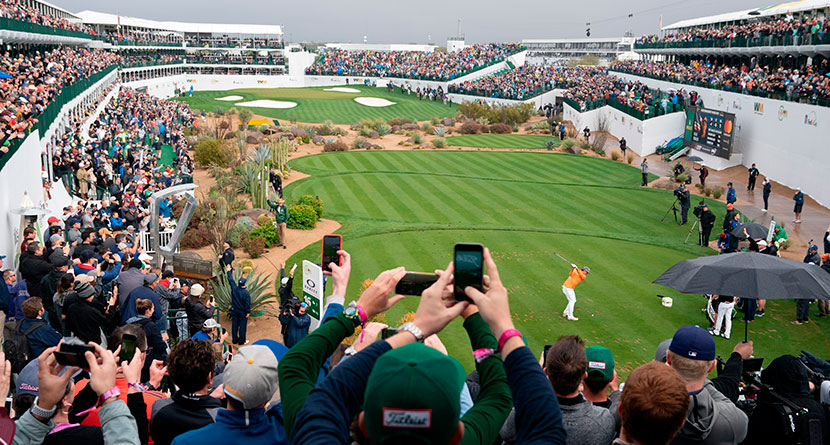 Want to mix a little gambling with your golf and football on Super Bowl Sunday? You already know that Las Vegas has you covered.

With the final round of the PGA Tour’s Waste Management Phoenix Open annually acting as the de facto pregame show for the Super Bowl, the good folks at the Westgate Las Vegas Superbook have released some fun crossover prop bets that allow golf fans to flex some of their intellectual muscle, and maybe make some cash off of it.

They also included some props for the Saudi International on the European Tour, which features a handful of household names teeing it up.

Here’s a sampling of what’s offered:

Feels great to leave Torrey with a ? on ?? Day!

Thank you to the fans, volunteers and everyone who made this another special @FarmersInsOpen! pic.twitter.com/V7bE7P3eOM

Marc Leishman picked up a winner’s check worth $1.35 million on Sunday thanks to his one-shot victory over Jon Rahm, which marked his fifth PGA Tour victory. For the big Australian, that takes his career earnings to $28,885,206, which is good enough for 41st on the all-time money list.

Rahm, despite coming up short, earned a nice $817,500 paycheck for his week’s worth of work and Rory McIlroy and Brandt Snedeker both cashed $442,500 for their split of third place.

Feherty And McCord, One Night Only

“The bottom line is I miss him, and I just thought it would be fun to do one of these together.”

Get ready for a Feherty and McCord reunion this week. https://t.co/uy5sdqHiBS pic.twitter.com/xGUvBRwf20

Since David Feherty left CBS Sports in 2016 to join the NBC Sports golf broadcast team, he and Gary McCord haven’t worked together in an official capacity, but with the PGA Tour heading to McCord’s hometown of Phoenix this week for the Waste Management Phoenix Open, Feherty thought that now was as good a time as ever to get the band back together.

“The bottom line is I miss him, and I just thought it would be fun to do one of these together,” Feherty said in an interview with the Arizona Republic ahead of a live event he and McCord will put on this week. “We’ve had so much history over the last 25 years. There have been some strange things that have happened. I thought it might be fun to have him on for the last hour, or the second hour, of the program.”

Titled “Together Again,” the live performance will follow Feherty’s “Off Tour” script for the first half before transitioning to a second-half that is sure to go off the rails when McCord comes on stage. The event will take place on Wednesday night at the Orpheum Theatre. Tickets are still available.

The PGA Tour has increased the overall purse for the event to $15 million which includes a new, bigger winner’s share. https://t.co/e7f0nH6Z64

One way to offset the news of the emerging competitive global Tour is to show that there’s still some decent cash to be made on the PGA Tour, and that’s exactly what the suits in Ponte Vedra Beach did last week announcing that the Players Championship purse would be rising yet again.

The Associated Press reported that the total purse up for grabs this March at TPC Sawgrass will be $15 million with $2.7 million going to the winner, making it the largest single-tournament prize in golf (unless the major championships decide to change that).

“It’s our flagship event,” Xander Schauffele said. “It needs to counterbalance the major championships, and it’s putting a nice incentive out there. I’m not upset by it.”

“It feels like it keeps going up and up and up,” said Jason Day. “That’s great. I’m not complaining.”