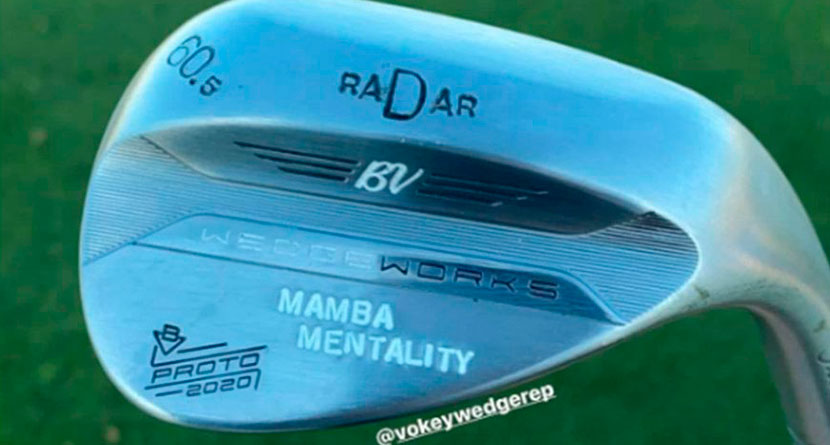 ESPN+ to get streaming deal as PGA Tour wraps up TV talks.

The final piece of the PGA Tour television rights negotiations seems to have fallen into place as the Associated Press reported on Tuesday that ESPN+ emerged as the winner of the Tour’s streaming sweepstakes.

The streaming rights, which currently belong to NBC Sports, will transfer over to ESPN+, two sources familiar with the negotiations told the AP’s Doug Ferguson. This marks ESPN’s latest foray into live golf after winning the rights to weekday coverage of this year’s PGA Championship at Harding Park.

Sports Business Journal reported that CBS, NBC and Golf Channel had won the television rights for the latest rounds of negotiations increasing the rights fees by 60%., bringing the PGA Tour’s haul from $300 million to $700 million.

The wedge stamps — MAMBA MENTALITY, BLACK MAMBA, KOBE BEAN BRYANT and 81 POINTS — all reference some Bryant nickname or accomplishment. Thomas also has a new putter cover in the bag that he has written “RIP GIGI” and “RIP KOBE” on.

Justin Thomas will pay tribute to Kobe and Gigi Bryant this week at the Waste Management Phoenix Open with a custom set of wedges and putter cover.
(?:Instagram/@JustinThomas34) pic.twitter.com/exQ7C5NdFu

Thomas has shared the impact Bryant had on his life in various social media posts over the past three days.

RIP, Mamba. You will forever be an idol to me ??

Rahm Can Reach No. 1 With Help From Koepka

There are some rather complicated scenarios for world No.1 involving @BKoepka, @McIlroyRory, @JonRahmpga (and the #OWGR math) this week (week #5) and next (week #6).

This is a summary of what the story is… pic.twitter.com/66OATGreDI

The No. 1 ranking is getting ready to change hands. Last week, Rory McIlroy could have overtaken Brooks Koepka for the Official World Golf Ranking crown with a win, but McIlroy came up short, tying for third. This week, No. 3 Jon Rahm has an opportunity to leapfrog McIlroy and overtake Koepka, who is playing on the European Tour in the Saudi International.

Rahm needs to win this week’s Waste Management Phoenix Open and have Koepka finish outside of the top-4 in Saudi Arabia for him to take over the top spot.

Regardless of what happens this week, this will mark the final week of Koepka holding the No. 1 spot as all three — Koepka, Rahm and McIlroy — are idle next week, and depending on the results from this week, either Rahm or McIlroy will take over the top spot next week.

I’m happy to announce Joseph Bramlett as the recipient of the Charlie Sifford Memorial exemption into @thegenesisinv. See you at Riv.https://t.co/bKApEWcWBD

Joseph Bramlett became the first two-time recipient of the Charlie Sifford Memorial exemption on Tuesday, an honor that bestows a sponsor’s exemption into the Genesis Invitational to a player representing a minority background.

“It’s great seeing Joseph back on Tour,” Woods said in a statement. “The determination to rebuild his swing and regain his card shows the perseverance Charlie would have admired. I look forward to seeing Joseph at Riviera this year.”

Bramlett also received the exemption in 2011.

“Being selected to represent and promote the diversity of the game through this tournament in 2011 was an experience that I’ll never forget,” Bramlett said. “Receiving the exemption again in 2020 is a huge honor, but an even greater opportunity for me to carry on Mr. Sifford’s legacy of promoting the game of golf to minority communities across the country. I sincerely thank Tiger and TGR Foundation for this opportunity and for all the incredible work they do throughout the year.”

The Genesis Invitational will be held Feb. 13-16 at Riviera Country Club in Pacific Palisades, California. The full field will be announced on Feb. 7.