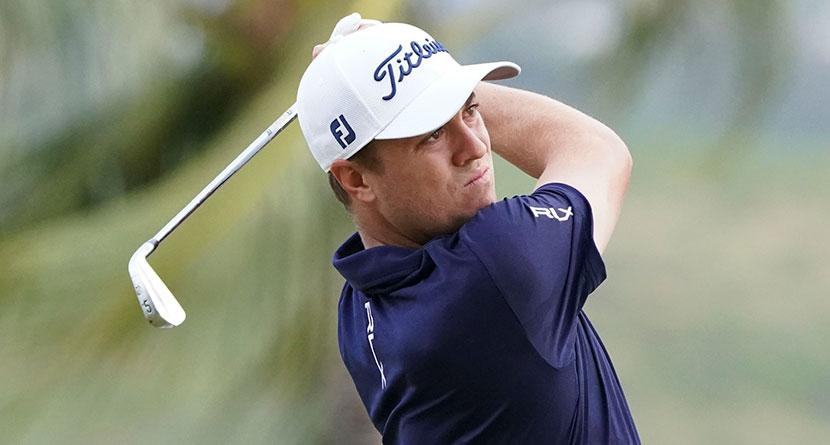 Nothing Stopping JT Going To Olympics… Except Qualifying

With Koepka and DJ expressing ambivalence this week about Tokyo, world No. 4 Justin Thomas made it clear that there’s “no scenario” where he would skip the Olympics if he qualifies for the U.S. team.

Fresh off the uninspiring comments from both world No. 1 Brooks Koepka and world No. 5 Dustin Johnson as it pertains to competing in the 2020 Tokyo Olympics, the second-highest-ranked American in the OWGR, Justin Thomas, made it clear the Olympics was a priority for him.

“There’s no scenario for me (to skip the Olympics if qualified),” Thomas said on Wednesday at the Waste Management Phoenix Open. “It’s just different. It’s once in every four years, and you have the opportunity to do it.

“I feel like it’s a very uncomfortable question to be asked, because there’s no right answer. No matter how you say it, you’re going to be ridiculed for it or say your priorities aren’t in line. You can’t really compare it to anything because it’s on its own, I think.”

Thomas is currently only behind Koepka as far as Americans in the world ranking, and given his success already in 2019-2020 — he has two wins already — it’s hard to foresee an American contingent heading to Japan without him.

It’s about positively impacting as many lives as possible.
#3billionand1 pic.twitter.com/p0bnIBvMYB

The PGA Tour announced on Tuesday that it and its tournaments have raised over $3 billion in all-time charitable giving thanks to a record 2019 in which the circuit raised $204.3 million.

“It’s truly a pleasure to thank our fans, sponsors, tournaments, players and volunteers for helping us generate over $3 billion for charity and positively impact millions of lives,” PGA Tour Commissioner Jay Monahan said. “As remarkable as this milestone is, what really matters are the countless stories like Amy’s that every tournament has. Together, we look forward to continuing to reach – and celebrate – millions more.”

The Tour runs more than 100 tournaments across its circuits and the money has positively impacted more than 3,000 charitable causes over the last 82 yars since its first charitable donation of $10,000 at the 1938 Palm Beach Invitational.

As concern grows over a coronavirus outbreak in China, the LPGA has decided to cancel its March event there. https://t.co/RbKMh6iNZy

Golfweek.com’s Beth Ann Nichols reported on Wednesday that due to concerns over the recent coronavirus outbreak, the LPGA Tour is taking precautions by canceling its Blue Bay LPGA event, which was scheduled for March.

This will be the second consecutive year the event has failed to take place. In 2019, the event didn’t occur because of a calendar move from the fall to the spring,

The virus’ death toll has exceeded 130 people and more than 6,000 have fallen ill as a result, according to the report. There is no vaccine for the virus currently. An official announcement from the LPGA Tour is expected to be made soon.

Spent a lot of time working with @TaylorMadeGolf to create the PIX. We designed the new graphics on both the TP5 & TP5x Pix to give instant feedback and let you know if you rolled it true. Time to put it in play this week! #TeamTaylorMade #TP5Pix pic.twitter.com/AK9Zptm4wU

Rickie Fowler is used to turning heads with his forward-trending outfits, and now he’s lent his creative spirit to golf ball design.

The new TaylorMade Pix TP5 and TP5x golf balls for 2020 feature pixelated designs that help the ball to be seen easier in the air as well as provide alignment and feedback on the putting green. The ball has “TaylorMade” printed on one side of the ball, unlike the industry-standard symmetrical branding, which allowed for “ClearPath Alignment” for putting feedback.

“The pix graphics give you a precise focal point to work with,” Fowler said in a statement. “When we started developing the new design, one of my first comments was if we didn’t have the full TaylorMade logo in two places, we would have space to create a path that works for alignment and feedback.”

Fowler is expected to put the newly designed ball in play this week at the Waste Management Phoenix Open, and they go to retail Feb. 28.