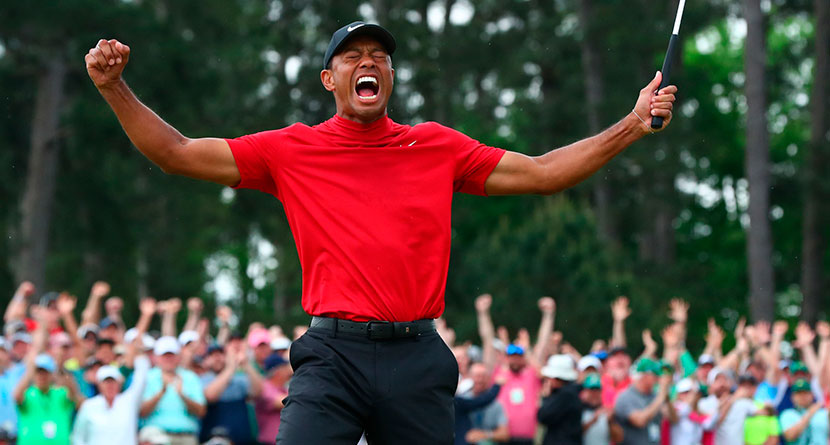 Tiger Creating Mini-Documentary About Back Recovery

Tiger Woods’ unlikely comeback from spinal fusion surgery is set to be the subject of a mini-documentary that details the pain, procedure and recovery Tiger had to make through his eyes and those of his doctors.

“The level of expertise and care I received from my medical team and Centinel Spine throughout this medical journey was unparalleled and an integral part of my return to the course,” Woods said in a release. “I hope this piece will be able to help people suffering through some of the same pain issues and feel positive about finding a lasting solution.”

“This will be an authentic account of Tiger’s patient journey from the point of view of an individual suffering from the life-altering effects of back or neck pain,” Centinel Spine Chairman & CEO John Viscogliosi. “We look forward to our continued work with Tiger to better support and educate individuals suffering from pain and discomfort.”

The video is expected to be released in mid-2020.

Would you pay $575 to play Pebble Beach? I answer one of golf’s toughest questions, plus dish out a few pointers to maybe find a discount. https://t.co/siiaaqCdNh

Your bucket list may be getting a little more expensive. Pebble Beach Golf Links announced that beginning on April 1, 2020, the greens fee to play the iconic seaside layout will rise $25 to a $575 base price.

“It’s expensive,” John Sawin, vice president and Director of Golf at Pebble Beach, told GolfAdvisor.com. “We still want people to be able to afford it for that premium golf experience. When you run 100 percent occupancy for the whole year, you would say we are under-priced.”

In January of 2019, the fee was $525, and it was upped $25 before the U.S. Open in June. Now, with another golf season on the horizon, one of the world’s most scenic courses will knock of the door of six Benjamins. And that’s just the base price.

A cart will add $45 per person, or a caddie would take the price up $95, plus tip, meaning you’re going to be spending somewhere in the neighborhood of $800 before you even get into the pro shop to buy some merchandise.

Tomorrow you change everything pic.twitter.com/yMSf0eXPHv

There’s no such thing as a sure thing in golf. Even at the height of his powers, Tiger Woods was winning at roughly a 33% clip, which makes the bet a Chicago punter made even the more ridiculous.

Hovland, who is yet to win on the PGA Tour, shot a 1-under par 70 in round one at TPC Scottsdale and currently sits nine shots back of first-round leader Wyndham Clark who shot a career-best 10-under par 61 on Thursday. So, that’s not great for @GuiltGambling.

Nothing can stop Alvaro Quiros.

He moved a rock with his bare hands at the #SaudiIntlGolf ?? pic.twitter.com/eetI3zFRDc

European Tour pro Alvaro Quiros is in the field at this week’s Saudi International, but he pulled a move on Thursday that was reminiscent of Tiger Woods at the Phoenix Open. With his drive up against a large rock, Quiros got the help of a few spectators and actually moved the small boulder out of his way, which is perfectly legal as the rock is considered a loose impediment.

It would appear as if the effort may have all been for naught as the Spaniard fired a round of 2-over par 72, which put him eight back of first-round leader Graeme McDowell and outside the cut line.