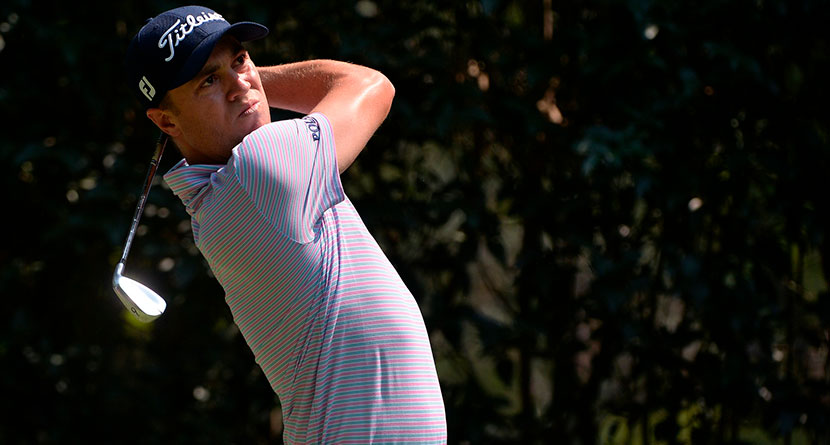 Time waits for no man, and at 26 years old, Justin Thomas is considered a member of the old guard, at least by one reporter’s standards.

During a moment of levity during Thomas’ pre-tournament press conference on Tuesday at The Players Championship, JT was asked about the new group of “young guns” such as Matthew Wolff, Viktor Hovland and Collin Morikawa.

“Am I officially out? Am I thrown out of the young crop?” Thomas asked.

When given an affirmative answer, Thomas said, “Man, that’s rough.”

Thomas will tee it up this week in his sixth Players Championship where his best finish is a T3 in 2016.

Despite SXSW Cancelation, Match Play On

As measures to contain the coronavirus outbreak ratchet up around the United States, PGA Tour commissioner Jay Monahan laid out the Tour’s stance on the pandemic and confirmed that despite other major events in the area shuttering its windows, the WGC-Dell Match Play at Austin Country Club in two week’s time will go on as scheduled.

“It started out as a task force. It’s now essentially a business unit,” Monahan said of the Tour’s response to coronavirus. “We have two leaders who have organized a large team to fully understand the coronavirus and its implications on all facets of our business. I think it goes without saying that the health, safety, well being of our players, our fans, our tournaments, everybody that’s involved in our ecosystem is of utmost importance.

“We are relying heavily, as other leagues and sports and entertainment venues are, on the World Health Organization, the CDC, but primarily given the fact that we’re playing 175 tournaments over six tours, this really is about a market-to-market exercise and truly understanding what local public health officials, local government officials, what’s happening on the ground through our tournament directors in every single market where we play.

“Suffice it to say it’s a very dynamic situation, but I’m really proud of the amount of effort and thought that’s going into not only where we stand today but the commitment to continue to gain as much information as we can.”

Specifically asked about the Match Play given the cancelation of the South By Southwest Conference and Festival, Monahan confirmed the Tour’s plans to continue with the event.

“We are fully planning on being in Austin, Texas, for the WGC Dell Match Play,” Monahan said. “This thing is so dynamic that you just have to go hour-to-hour, day-to-day, but right now we have every assurance that we’ll be in Austin for the event.”

At the Pebble Pro-Am, @chrisbharrison spoke with @Wyndham_Clark about becoming the next Bachelor… ?@ColtKnost and @thesleezyman get the scoop on the latest @golf_subpar prior to #TheBachelor finale.

ABC’s hit show The Bachelor concluded last night (or so I’m told), and with any pop culture phenomenon, golf has found a way to ride that cash cow into the news cycle.

Enter Wyndham Clark, the 155th-ranked player in the world and a three-year veteran of the PGA Tour. Having played with the show’s host, Chris Harrison, in recent years at the AT&T Pebble Beach National Pro-Am, he told the story of the possibility of a golfer becoming the next leading man on the show to the Subpar podcast with hosts Colt Knost and Drew Stoltz.

Explaining the background, Clark did not do anything to quash rumors that he would be happy to take on the challenge of dating 30 women in front of 30 million people in hopes of finding love.

“Would you be a good Bachelor, do you think,” Stoltz asked Clark.

“I’d be an incredible one,” he responded.

No player has ever successfully defended their title at TPC Sawgrass, but oddsmakers have given Rory McIlroy a short price to do so.

“If there’s been no one to defend, it would be a nice time to start and have someone do that,” McIlroy said to open up his pre-tournament press conference. “It is an opportunity for sure. I don’t think you ever need any extra motivation when you come to this golf tournament, but to be the first one to defend here would be very cool.”

Having finished inside the top-5 in his last seven events, McIlroy goes off as the pre-tournament favorite at 8/1 while Jon Rahm, who can overtake McIlroy as the No. 1 player in the world with week with a win and a McIlroy finished worse than a three-way tie for second, is nipping at his heels at the betting window with odds set at 12/1, according to GolfOdds.com.