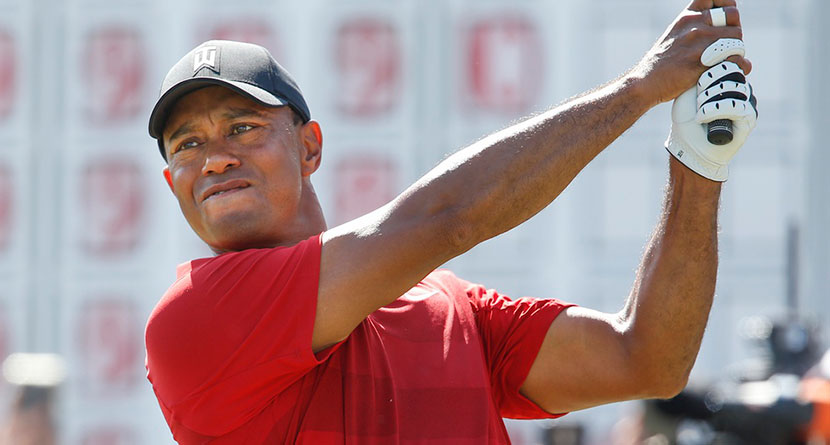 Tiger Woods to skip Bay Hill with back stiffness https://t.co/mtME9cWzSV

Tiger Woods will not be playing this week at the Arnold Palmer Invitational at Bay Hill with his agent, Mark Steinberg, citing back stiffness, according to ESPN.com’s Bob Harig.

Having skipped the WGC-Mexico Championship and this past week’s Honda Classic, two events that Woods has played in the past, the decision to miss Bay Hill was puzzling to many, but given Woods’ noted struggles with his health, it shouldn’t be a surprise that Woods would prefer to take another week off to rest.

“He is not going to play,” Steinberg told Harig in a text. “Back still stiff and just not quite ready.”

Despite the hope that he would play more in his build-up to his Masters title defense, Woods again laid the groundwork for a truncated schedule at the Genesis Invitational, his most recent PGA Tour start.

“You know, that’s the fun part of trying to figure this whole comeback — how much do I play, when do I play, do I listen to the body or do I fight through it?” Woods said at Riviera. “There are some things I can push and some things I can’t. And so I had a theory this year that I may play about the same amount. What did I play, 12 times last year, and so that’s kind of my number for the year.

“I can’t play a lot more than that just because of the physical toll and I want to stay out here for just a little bit longer.”

Woods is expected to play in next week’s Players Championship at TPC Sawgrass as well as the WGC-Dell Match Play two weeks later.

Im Breaks Through To Win Honda

Facing one of the most difficult three-hole stretches on the PGA Tour, Sungjae Im went birdie-par-birdie to lock up his first PGA Tour win at just shy of 22 years of age, although Im had more on his mind than winning for the first time

“It’s kind of a huge deal,” Im said. “I’m just glad as a Korean player I can deliver some good news to the countrymen back home.

“There has been, reportedly, over 2,000 cases of people that have been affected with the coronavirus in Korea,” Im said. “To be honest, I’m a little concerned and worried about how fast this virus is spreading. As of right now, all I can do is pray for the best and just hope moving forward that not many more people get affected, and, hopefully, this virus can be calmed down and sort itself out very soon.”

With the win, Im moves to 25th in the Official World Golf Rankings and cements himself as South Korea’s high-ranked golfer.

54-hole leader Tommy Fleetwood shot a 1-over par 71 to drop into third place while Mackenzie Hughes finished runner-up thanks to a strong back nine.

Just 18 months after completing his Finnish military service, Sami Valimaki is a winner on the European Tour.

The 21-year-old needed a monster putt for birdie on the 72nd hole to force a playoff with South African Brandon Stone, and after pars on the first two playoff holes, Valimaki was able to take advantage of a Stone slip up to claim the title.

“It’s awesome,” he said. “There are not many words to say, it’s unbelievable.”

Death, taxes and Bernhard Langer on the PGA Tour Champions.

Trailing by two shots coming into Sunday at the Cologuard Classic, Langer fired an 8-under par 65 to win by two shots over Woody Austin.

“I feel if I can play my best, I can win out there,” Langer said. “I can’t play at 80%. There’s too many good players nowadays that will lap me if I don’t play my best.”

The win was Langer’s 41st on the over-50 circuit, which moves him closer to Hale Irwin’s all-time mark of 45 victories.

“I don’t think about it,” Langer said of the record. “But I get reminded of it just about every week. One closer. We don’t live and die for records, but it’s fun to have a couple of them.”