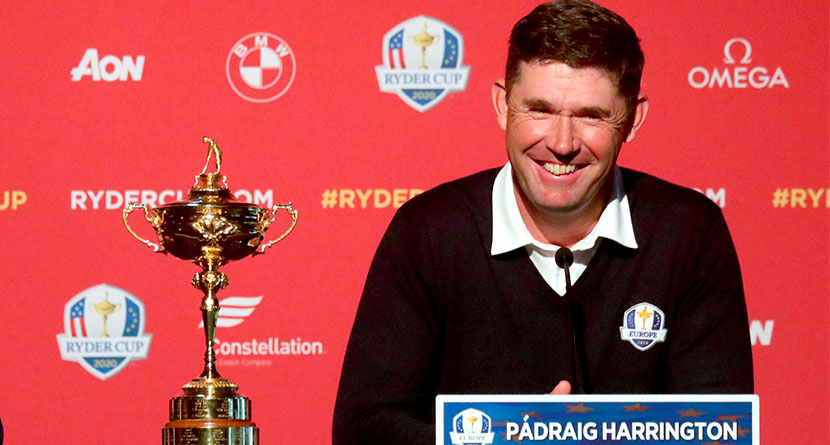 A report surfaced that this year’s Ryder Cup would be postponed to 2021.

During a time in the world where very little surprises people anymore, a bombshell report hit the wire on Tuesday evening that took golf fans ‘ breath away: the 2020 Ryder Cup was to be postponed. While we have become conditioned to see events canceled or pushed back a few weeks or even months in advance, the Ryder Cup, scheduled for September was six months away.

The Telegraph’s James Corrigan had the scoop, and while there has been some backlash to his reporting and denials from official accounts, Corrigan has stood firm. That report took another body blow on Wednesday when European Ryder Cup captain Padraig Harrington refuted it.

“September is a long way off,” he said, “so there’s no change to the situation at all at this stage. I know there’s been some rumors and they had to put out a statement to say there’s been no change, but there’s definitely no change.

With his family quarantined in Spain, Jon Rahm isn’t remotely concerned about the extended break on the PGA Tour: “Whether I play golf or not right now is not on my radar” https://t.co/27WS3qP8td

In the minutes, hours and days before and after The Players Championship decided to call off the weekend of the tournament amid the coronavirus outbreak, some of the Tour’s younger stars were among the most measured and impressive in their comments. Among those was 25-year-old Spaniard Jon Rahm.

Perhaps it is Rahm’s current family situation in his native Spain that gave him the perspective, but in speaking with SportsIllustrated.com earlier this week about the cancellation of the flagship event, his own preparations for the lay off and other pandemic concerns, it’s easy to see where Rahm was getting his perspective.

“Basically, everyone is in quarantine,” Rahm said. “My family is in great spirits. My grandma is the most spirited, most energetic 85-year-old you’ll ever meet. She’s trying to look on the bright side of everything so it’s always refreshing to talk with her, but it’s hard. She saw a family get taken home by the cops because they were out walking.

“My great aunt has ALS and is in a nursing home (in Madrid) where there’s been a confirmed case. She’s lost control of much of her body and there’s a confirmed case in her home and she can’t even close her mouth. That is giving us the biggest scare right now.”

While Rahm and his new wife, Kelley, are making plans to self-isolate in their Scottsdale home, if and when he gets to play golf again isn’t of major concern to him.

“I’ll try to just stay at home, work out and wait and see. I might be erring on the side of extreme caution, but who knows? That’s where my mind is at right now. Whether I play golf or not right now is not on my radar.”

We’ll mark you down as a maybe?

Speaking on Tuesday, both Brooks Koepka and Dustin Johnson sounded noncommittal about the 2020 Olympics: https://t.co/uEBiZ5moLB pic.twitter.com/K81szrVliB

Already on the record as someone not completely committed to competing in the Olympic golf competition, Brooks Koepka’s chances of doing so are taking a big hit during this unexpected hiatus from the PGA Tour due to the coronavirus outbreak.

Speaking to the Associated Press’ Doug Ferguson this week, Koepka intimated that his hand may be forced a bit considering his slow start to the season and the truncated nature of the remainder of the year if and when things get back to normal on Tour.

“This changes a lot of things now with what goes on with the Olympics,” Koepka said of the break in the action that currently finds him at 213th in the FedEx Cup standings. “Ot makes it very difficult because of the start I’ve gotten off to.

“Let’s say we’re out six to eight weeks. I’m so far down in the FedExCup because of my play. And the PGA Tour is my job. I want to be right there at the end.”

As of now the 2020 Open Championship will be played as scheduled. https://t.co/6EBxHC5vKX

As the world at large becomes more and more mired in doom-and-gloom scenarios, the R&A is holding steady to its July 16 date for the 2020 Open Championship at Royal St. Georges.

“We are undertaking a comprehensive evaluation of our plans to stage the 149th Open at Royal St George’s and the AIG Women’s British Open at Royal Troon, which are four and five months away respectively,” the R&A said in a statement on Thursday. “This includes examining a range of scenarios for staging the championships, with our focus on proceeding as planned, as well as considering other contingency options available to us.”

The governing body did cancel two events in the statement — the R&A Student Tour Series Final and the R&A Girls’ U16 Amateur Championship.