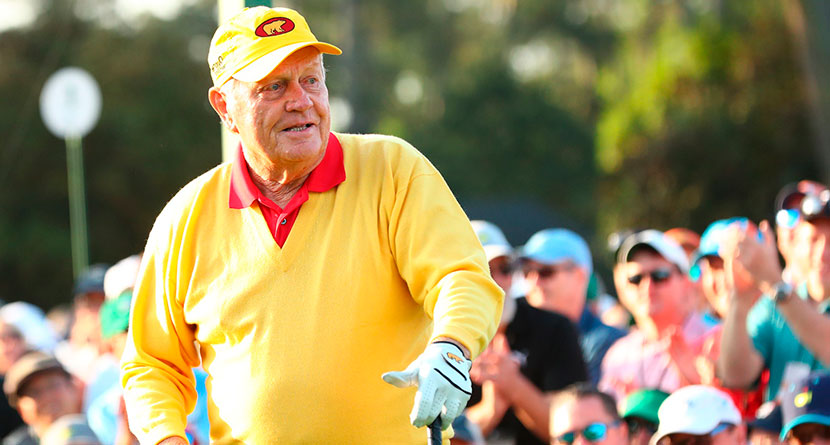 I’m thrilled to join friends, like @McIlroyRory & @NickFaldo006, as well as other athletes, like @StephenCurry30, @MichaelPhelps & @DaleJr, to raise funds for COVID-19 relief. I’ve signed one of my own Golden Bear hats & gloves & anyone who donates $25+ earns a chance to win them pic.twitter.com/YSFluMQ9m5

Jack Nicklaus, Rory McIlroy and Nick Faldo are among the athletes using their celebrity for a good cause as the joined over 100 other athletes in the “Athletes for COVID-19 Relief” auction.

Among the golf items up for auction are a McIlroy-signed Players Championship flag, a signed hat and glove from Nicklaus, a signed Ryder Cup flag from Ian Poulter, a signed Masters flag and used putter from Sir Nick Faldo, a signed bag from Cristie Kerr, a set of three custom wedges from Paige Spiranac and a signed pair of joggers from Erik van Rooyen.

The Athletes Relief auction isn’t a typical bidding war; instead, fans donate at least $25 on any item they want to be entered to win with a random drawing resulting in the winner from the pool of donors.

Proceeds will go directly to the Center for Disaster Philanthropy’s COVID-19 fund. Check out the items and bid/donate here.

Plans for the 2020 majors and Ryder Cup are being discussed, sources say: https://t.co/cFwdDjn2TG pic.twitter.com/BOEtTexBYL

As experts predict that the United States and the United Kingdom are about to enter the eye of the coronavirus storm in the coming weeks, there is optimism that there is light at the end of the tunnel, signified to golf fans by the scrambling of the game’s governing bodies to secure new dates for the major championships.

In an all-encompassing anonymously-sourced article from Golf Digest over the weekend, signs point to fall schedule of majors and FedEx Cup Playoffs while the Ryder Cup seems likely to move to 2021.

Here are the updates and prognostications according to Digest’s Brian Wacker and Joel Beall.

The Evian Championship has been rescheduled, filling the void in the schedule created by the Olympics cancellation: https://t.co/U1MfyklFwl pic.twitter.com/MhclI8cIIw

We’re starting to get some realistic dates be gobbled up for the return of major championship golf, which is a good thing. The bad thing? It’s much further away than any of us would have hoped.

The Evian Championship, the LPGA Tour’s second major championship, has been moved from July 23-26  to August 6-9, a date vacated by the Olympic women’s golf competition.

“We greatly appreciate the willingness of Franck Riboud, Jacques Bungert and the team at the Evian Championship to move dates and align with our European swing,” LPGA Commissioner Mike Whan said. “This adjustment makes for easier travel for players and assists us as we look to reschedule previously postponed events during a crowded summer and fall timeframe. Like all our corporate partners, the team at the Evian Championship has always taken great steps to elevate the stage for our athletes. This 2020 schedule shift is yet another example of them supporting our players and our Tours during a very difficult time around the world.”

With the guidance of public health experts, the Founding Partners have canceled the upcoming #DriveChipandPutt qualifying season and rescheduled the National Finals for April 4, 2021, due to the ongoing impact of COVID-19.

Professional Tours certainly aren’t the only level of competitive golf being affected by the coronavirus pandemic, and now one of junior golf’s biggest days — the Drive, Chip and Putt National Finals — has been postponed by a year and qualification for next year’s event has been canceled.

The Founding Partners made the decision and released a statement on Friday afternoon.

“As deeply disappointing as it is for us to make this very difficult decision, it’s clearly the right thing to do for all involved,” said Stu Francis, president of the USGA. “We look forward to seeing everyone play golf again, especially these juniors whose talent, joy and drive to compete inspire all of us.”

“We share in the disappointment of all those who were anticipating the start of Drive, Chip and Putt local qualifying, as well as this year’s National Finalists, who worked so hard to prepare for this April,” said Fred Ridley, Chairman of Augusta National Golf Club and the Masters Tournament. “These decisions protect the health and well-being of the program’s many important constituents and were made independently from our Masters Tournament rescheduling efforts. With no qualifying this summer, we are pleased to maintain this wonderful tradition by welcoming these 80 boys and girls to Augusta National next April.”