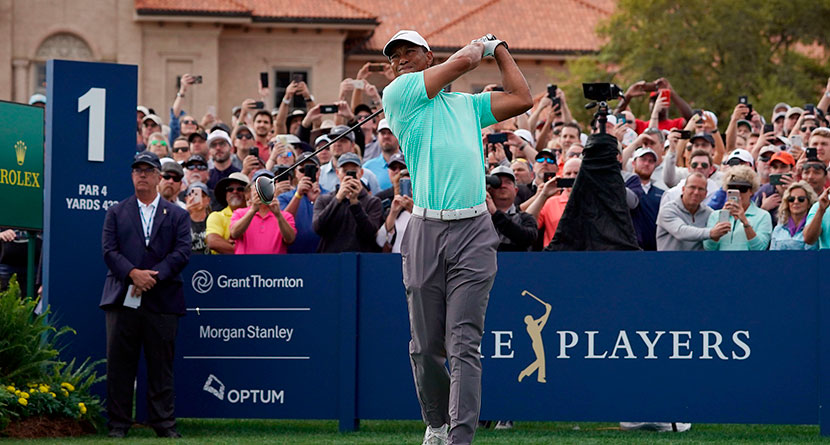 Tiger Not Guaranteed To Be At Players

That sound you don’t hear is everyone at PGA Tour headquarters holding their breath.

After opting to skip out on the WGC-Mexico Championship, the Honda Classic and this week’s Arnold Palmer Invitational, the conventional wisdom was that Tiger Woods could conceivably skip each of those events, but not all of them. One assumption, however, was that he would tee it up at the PGA Tour’s flagship event, the Players Championship next week.

Here’s another example of what happens when you assume.

“This is something that he’s going to battle with over the next few years,” Woods’ close friend and Golf Channel contributor Notah Begay III said on Wednesday. “It’s just the ebbs and flows of dealing with the physical challenges in his back. I mean, how many surgeries he’s had and just try to recover the mobility. More importantly trying to get enough days in a row where he’s feeling good and getting some reps in. If you’re not able to put the practice in you’re certainly not going to be able to show up at a place like TPC Sawgrass and have the requisite skills to go out and defend yourself on a golf course that exposes everybody.

“Things are starting to progress for him a little bit and hopefully we see him next week.”

Woods has until 5 p.m. Friday afternoon to commit to play in next week’s Players Championship, but as it stands as of this writing, he has not committed to playing in the event.

Spoke to a source who confirmed the departure of PXG’s director of tournament player relations, Matt Rollins, played a role in Billy Horschel and Chez Reavie leaving the company’s tour staff.

A personnel move by equipment manufacturer PXG played a role in two of the company’s biggest-name brand ambassadors leaving their stable of pros, according to a report by Golf.com’s Andrew Tursky and Jonathan Wall.

PXG recently parted ways with Matt Rollins, the company’s former director of tournament player relations, which precipitated both Billy Horschel and Chez Reavie opting to break ties with the company.

“Matt played an important role in bringing some of those guys in, Billy and Chez included,” a source told Golf.com. “There was loyalty towards Matt that no doubt played a role in their decision to leave. It wasn’t the gear.”

Horschel relayed that he and PXG left on good terms, but declined to go into specifics on reasons for his departure.

Every Surfaces Again At Bay Hill

If the Arnold Palmer Invitational didn’t have such an iconic namesake already attached to the title of the event, one could be convinced that the event could be aptly named the Matt Every Invitational.

Going back-to-back at Bay Hill in 2014 and 2015, Every hasn’t won outside the confines of Arnie’s Place on the PGA Tour over the course of his 14-year professional career, but that hasn’t stopped him from turning up in Orlando again this year to contend.

A week after missing the cut thanks to shooting an 85 on Friday at the Honda Classic, Every bested his total by 20 strokes.

He leads Rory McIlroy by a stroke, Talor Gooch and Scottie Scheffler by two and host of others at 4-under par by three.

Aside from the drama emanating from Eddie Pepperell’s Thursday disqualification, there’s quite a tournament going on in Qatar this week as some of the circuit’s young stars will duke it out over the weekend.

Through 18 holes, Denmark’s Nicolai Hojgaard held the lead after a 7-under par start, but early starters on Friday have overtaken the 18-year-old Dane. More established players like Andy Sullivan and Marcus Kinhult have climbed the leaderboard with strong second rounds, setting up a pretty bunched leaderboard heading into the weekend at Doha.

If the name “Hojgaard” is ringing some bells, that’s because Nicolai’s twin brother, Rasmus, won the AfrAsia Bank Mauritius Open in December on the Euro Tour.