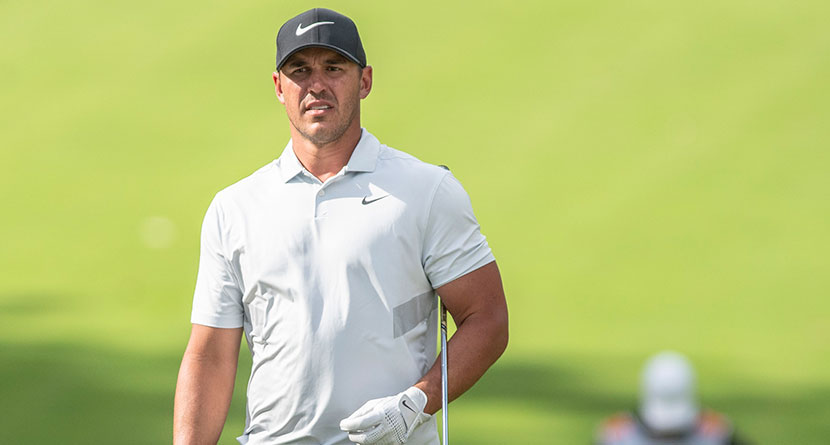 Brooks how you playing?

The weekend at the Arnold Palmer Invitational was not made for the meek of heart. Brutal winds and difficult course conditions resulted in ballooning scores and the highest 72-hole total winning score in over six years on the PGA Tour.

No one was immune, either. After making the cut on the number, world No. 3 Brooks Koepka fired the worst round of his professional career on Saturday, a 10-over par 81. Not one to harp on a poor performance, Koepka rallied to post an even-par 71 on Sunday to move 17 spots up the leaderboard, not that he was overly thrilled with that round of golf, either.

“Yesterday was probably one of the harder rounds I think — definitely in the top-10 I played out here,” Koepka said on Sunday.

Asked how it compared to his day before.

Koepka finished tied for 47th place. He’ll head to the Players Championship this week where his best finish at the event is an 11th in 2018.

Ernie Els has had one of the most decorated careers in all of golf. A World Golf Hall of Famer and winner of 71 professional tournaments around the world, the Big Easy added no. 72 on Sunday at the PGA Tour Champions Hoag Classic at Newport Beach Country Club, his first win on the over-50 circuit.

Els birdied the 15th and 18th holes down the stretch to win by two strokes over Fred Couples, Glen Day and Robert Karlsson.

Els lost in a playoff in his first Champions Tour event, but after putting in the work, Els figured something out.

“I didn’t have that free-flowing feeling,” Els told the LA Times. “I had to work hard for it, and that’s a good thing to do, to work hard for something. You don’t want something falling in your lap. I’m glad the first one’s over with, and we can move on now and it gets more comfortable after this.

“After being in a playoff in Hawaii, coming close to winning there, I didn’t want to mess this one up. I had a great opportunity, and I wanted to try and take that.”

Jorge Campillo gave up a two-shot advantage with three holes to play to European Tour veteran David Drysdale on Sunday at the Qatar Masters, but an unconscious putter allowed the Spaniard to eke out of victory on the fifth playoff hole.

Looking like it was his to win on the first playoff hole, Drysdale looked on as he waited to hit his 8-foot birdie putt as Campillo rolled in a 30-footer of his own. Drysdale matched his birdie to extend, and another pair of birdies on the 18th on the second playoff hole sent them back to the tee.

Two more times they would halve the hole before Campillo made the 20-footer on the fifth playoff hole and Drysdale failed to match giving the 33-year-old his second European Tour victory.

Next week’s Magical Kenya Open has been postponed “due to the threat posed by the spread of the Coronavirus”, per the @EuropeanTour. pic.twitter.com/HKoTVtvrlp

This week’s Magical Kenya Open became the third event on the European Tour schedule to be canceled or postponed due to the coronavirus outbreak.

“Due to the threat posed by the spread of the Coronavirus (COVID-19), the Government of Kenya has this morning advised of their decision to postpone all meetings and conferences in the country of an international nature, a suspension which will be reviewed in a month’s time,” the European Tour said in a statement. “This means the Magical Kenya Open Presented by Absa on the European Tour, scheduled for the Karen Country Club in Nairobi next week from March 12-15, will now not take place.”

“We understand and totally respect the decision made by the Government of Kenya in these difficult times,” European Tour chief executive Keith Pelley said. “We are looking into the possibility of rescheduling the tournament at some point later in the season, but that remains simply a possibility right now – we have no definitive plans at this stage.”

The Magical Kenya Open joins the Maybank Championship in Malaysia and the Volvo China Open as events lost this year.