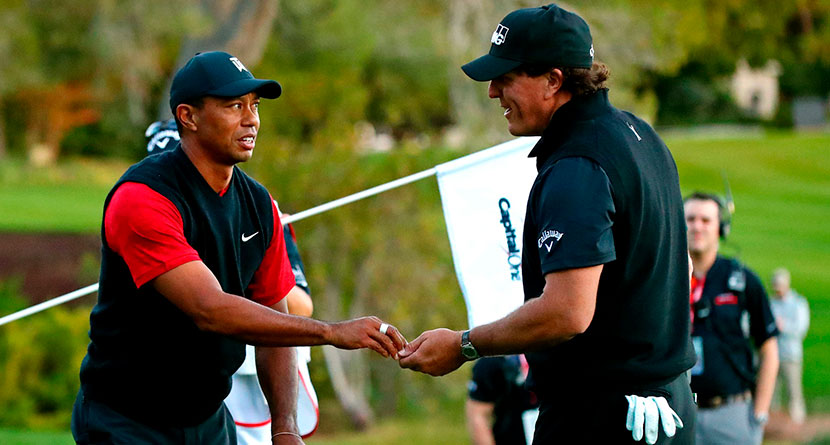 Tiger Woods and Peyton Manning vs Phil Mickelson and Tom Brady is scheduled right now for Memorial Day weekend in Florida. Will air on TNT. Breaking news on @outkick from @burackbobby_: https://t.co/ey9n306eSq

The Match: Champions for Charity appears to have a date and venue, according to reports from OutkickTheCoverage.com and TCPalm.com.

Both Outkick and TC Palm reported that the match, which will feature Tiger Woods and Peyton Manning against Phil Mickelson and Tom Brady with all benefits going to COVID-19 relief, will be played on Memorial Day Weekend, likely on Sunday, May 24.

Craig Dolch of TCPalm.com reported earlier this week that Medalist Golf Club, Woods’ home club, is the likely venue, and the trash talk has already begun.

“There has been a little bit of trash talk already, a little bit of banter back and forth,” Woods said in an interview with GolfDigest.com. “Whether it’s, ‘I might need extra caddies to carry my Super Bowls,’ because (Brady) has more Super Bowls than my partner (Manning). Or, ‘I’ve got more majors than Phil, so I’m gonna have to have a truck come up to the first tee and U-Haul it out.’

No Relegation From PGA Tour, Limited Promotion From KFT

• No relegation this season
• Limited promotion for top 10 KFT players
• No KFT Q-Schoolhttps://t.co/36Kw1dhrrL

The fringes of golf’s top Tour will not see the turnover its accustomed to after a year that has been thrown into limbo thanks to the coronavirus.

GolfChannel.com’s Rex Hoggard reported on Wednesday that according to multiple sources, “there will be no relegation from the PGA Tour and only limited promotion from the Korn Ferry Tour this year.”

“The plan, which will be sent to players this week, is for this year’s Korn Ferry Tour schedule to roll into next season’s lineup, creating a mega-schedule with only the top 10 players from the secondary circuit receiving limited status on the PGA Tour for the 2020-21 season,” Hoggard wrote. “Those players would likely be limited to playing opposite-field and less high-profile events.”

Additionally, there will be no Korn Ferry Tour Qualifying School, allowing players with status on the PGA Tour’s minor-league circuit a full season’s worth of opportunities to move up the pecking order.

IGF announces that qualifying window for making the Olympic golf competition has been extended by a year. New cutoff will be June 21, 2021 for men and 6/28/21 for women. Teams and fields will still be decided by OWGR.

As some federations decide how to approach an Olympic Games that has been pushed back a year, the International Golf Federation and International Olympic Committee announced Wednesday that the qualification will reopen and run through a similar timeline next year.

Golfers now will accumulate Olympic Golf Rankings (OGR) points through June 21, 2021, for the men, and June 28 for the women. Field sizes for both the men and women remain at 60 players.

“Having received from the IOC confirmation of the dates for when the Tokyo 2020 Olympic Games will be held and the qualification principles, the fairest and most equitable way to determine the qualifying athletes was to align the previous qualification system with these new dates,” said Antony Scanlon, IGF Executive Director. “We are pleased that the IOC swiftly approved these changes to provide clarity on this important area. The IGF will continue to work closely with the IOC and Tokyo 2020 to address the other areas that the postponement of the Games affects our sport and our athletes, to develop the necessary plans to resolve these. We remain fully committed to providing safe and fair golf competitions and a memorable experience for our athletes when these Olympic Games are held in 2021.”

Scottie Scheffler holds off Will Zalatoris and Viktor Hovland to win at Maridoe. pic.twitter.com/vw0LQCQlsm

It may seem like forever ago, but before the coronavirus hit the United States, PGA Tour rookie Scottie Scheffler seemed to be knocking on the door of his first victory. He got his first win of 2020 on Thursday, albeit at the Maridoe Samaritan Fund Invitational.

“It’s always fun beating your friends,” Scheffler told GolfChannel.com.”I really wasn’t playing so well on the front but kept myself in the round, didn’t make any bogeys, and then was able to hit some good shots down the stretch and make a few birdies. I like winning a lot, so whatever it is, if we’re playing a money game or whatever it is, I’m nervous, so it felt pretty similar to any other time you’re trying to win.

“Definitely glad to come out here and raise some money for a good cause. There are a lot of people struggling right now, especially in our world, so it’s definitely good to come out and play, and hopefully get the economy going again soon.”