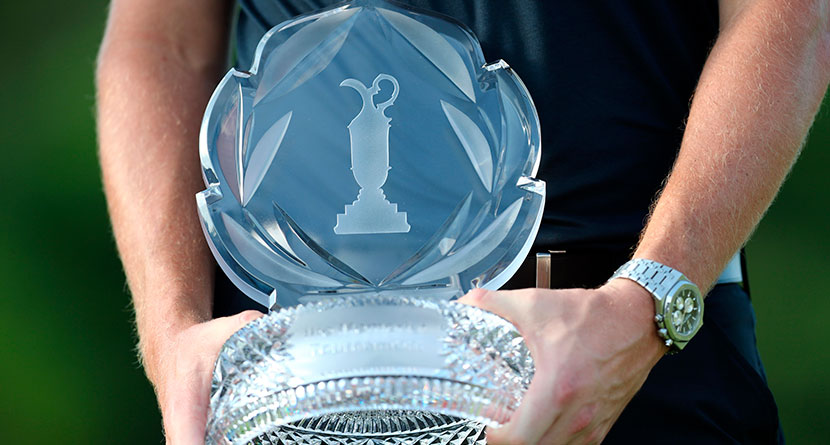 The Memorial Tournament in July will be ramping up its safety precautions and could provide a blueprint for future PGA Tour events. https://t.co/GRCzcDzAzv

When the PGA Tour begins its resumption of play, presumably next month at the Charles Schwab Challenge at Colonial Country Club, there will be no fans in attendance.

Fans are prohibited at least from the first four events of the Tour’s restarted schedule, according to its original release, but what will happen after those first four events? The Memorial Tournament at Muirfield Village Golf Club is on track to be laying down the blueprint in that regard thanks to chips in tournament badges that will be able to track the movement of individuals on the grounds.

Protocols he highlighted also include limiting ticket sales, curtailing capacity in the clubhouse and public gathering structures, elimination of all grandstands, supplying face coverings for staff and volunteers, taking the temperature of everyone who enters the grounds, prohibiting the sale of draft beer and fountain drinks, restricting all transactions to credit and debit cards and distributing a healthy dose of hand sanitizer stations throughout the property.

But it’s the RFID technology in the badges, which the Memorial has used for the last four years to monitor entrances and exits and identify choke points at Muirfield Village Golf Club, that could be the most important aspect of the tournament game plan. The chip cannot ascertain an individual’s identity, just the location of the badge.

“At any time we can know around the golf course how many people are collecting in a certain area,” Sullivan said. “We’re going to use that technology to make sure that we’re protecting everyone around us, protecting the folks that are inside those various venues and make sure that we’re monitoring effectively and producing a tournament that everyone can be comfortable with.”

Now is your chance to own some MJ golf memorabilia https://t.co/GzxTywXZAo

With the success of the ESPN 30 for 30 documentary, The Last Dance, auctioneers are taking advantage of the refreshed interest in Michael Jordan both on and off the court.

Often portrayed in the doc as the avid golfer that he is, Golden Age Auctions has compiled a nice lot of Jordan-specific golf memorabilia that is currently up for bidding.

The auction items that are available include a signed Nike Jumpman staff bag, a super-custom signed Jordan/Bulls driver, a set of Wilson Fat Shaft Tour Cast irons (1-PW, GW, SW, LW), a signed Michael Jordan Celebrity Invitational hat, a 1996 American Silver Eagle dollar, and one red Michael Jordan custom golf tee. The package of items includes certificates of authenticity and UDAs (Upper Deck Authenticated). The current bid is $2,500+ and climbing with 16 days left to bid; the auction ends on May 23.

According to the Golden Age Golf Auctions listing, Jordan used this golf gear circa 1990, which means he played with this equipment during his championship-winning days on the Chicago Bulls. The auction site says the equipment was given to Hunt Auctions by Michael Jordan “about 10 years ago” when Jordan moved out of his famous Chicago residence.

Courses In England Set To Open

Full statement in response from the UK golf bodies to the Prime Minister’s statement earlier this evening: https://t.co/eALC2vRXox pic.twitter.com/RJB3w4Noy2

It’s been 50 days since golfers in the United Kingdom had their courses ordered to shut down by the government, but an announcement from England Golf on Sunday has British golfers chomping at the bit to get back on the course.

Following comments from Prime Minister Boris Johnson on Sunday, England Golf announced they would be reopening courses on Wednesday, May 13, but courses in Northern Ireland, Scotland and Wales will remain closed.

From the England Golf statement:

The UK Government has announced that golf will be able to resume in England on Wednesday, 13 May 2020. All outdoor sport must be done alone or within a household group and that includes golf. There is no change to the current position in Northern Ireland, Scotland and Wales and so golf courses in these countries must remain closed for now.

It is important to stress that this remains an extremely difficult situation throughout the UK and we are acutely aware that many lives have been lost to the COVID-19 pandemic. The effects of the virus will continue to be felt for a long time to come. As a sport we must work together to resume play responsibly as and when the relevant Government determines it is safe to do so. We must ensure that the safety and wellbeing of everyone involved from golfers, to club staff and greenkeepers is maintained at all times. Golf clubs and golfers have observed the lockdown very well and must keep it up and act responsibly as play resumes.

The best players in a bizarre season of college golf were named last week as Pepperdine’s Sahith Theegala and Furman’s Natalie Srinivasan as voted on by players, coaches and members of the media.

On Friday, Theegala was officially recognized as the winner of the 2020 Fred Haskins Award while Srinivasan was named the recipient of the Annika Award. The awards, both presented by Stifel, are given to the top male and female collegiate golfer, respectively, and are voted on by players, coaches and members of the media.

Despite the competition year being shortened due to the pandemic, Theegala and Srinivasan, both seniors, built strong resumes and finished the year ranked atop the Golfstat rankings. Theegala won twice and posted four other top-6 finishes for the top-ranked Waves. Srinivasan captured three events and ended her season with a runner-up finish at the prestigious Darius Rucker Intercollegiate.