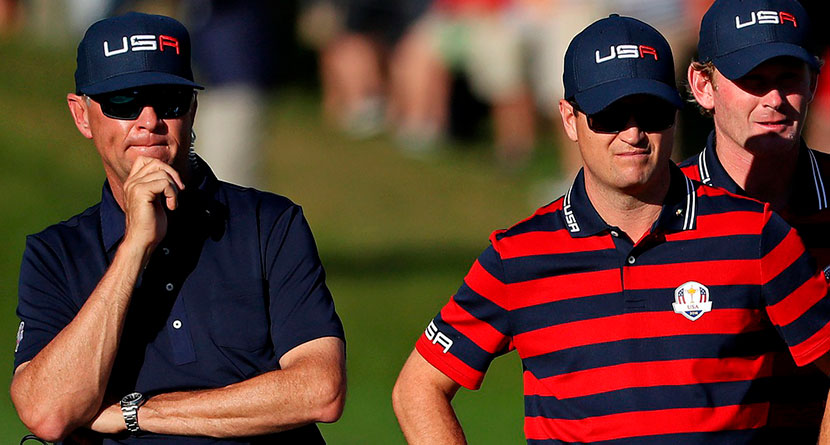 They join Jim Furyk who was already in the fold.

The announcement was not a surprise; Golf Digest reported in January that American captain Steve Stricker would name Love and Johnson assistants for the September matches at Whistling Straits in Haven, Wis. Love and Johnson join Jim Furyk, who was tabbed as an assistant in 2019, as part of the U.S. braintrust.

“With the Ryder Cup it’s important to surround yourself with quality individuals who you can lean on and who have the best interests of the team in mind,” Stricker said in a statement. “Jim (Furyk) and I have talked about this a lot in the last year and now we are happy to add two Ryder Cup veterans in Zach and Davis to the conversation with the goal of putting this team in a prime position to win. Both Zach and Davis share a passion to compete at the highest level and are strong communicators, which is important, especially when we’re in the heat of competition.”

Two guys who like a little action will have the opportunity to tee it up more regularly when Phil Mickelson completes his move to South Florida later this year, and he already has an invite to join Michael Jordan’s exclusive The Grove XXIII golf club.

Mickelson told the Dan Patrick Show on Monday that he’s in the process of joining.

“I’m actually in the process of joining his club there in Florida,” Mickelson revealed on Monday’s Dan Patrick Show when asked if he’s played with Jordan. “He did an exceptional job there.”

“You have to be invited,” Mickelson said of the process to join. “Fortunately, I know a number of members there, and my wife and I just bought a lot fairly close, about 10 to 15 minutes away. So it’ll be a great place to play and practice.”

With PGA Tour re-start a month away, Forth Worth mayor confident event will take place with virus testing in place. https://t.co/SSyV1xTFRV

We’re less than a month away from the scheduled resumption of the 2020 PGA Tour season, and the first event on the docket is ready to host a fan-free environment.

Speaking to ESPN.com’s Bob Harig, Fort Worth mayor Betsy Price said that the city and the host course, Colonial Country Club, are on track to hold the event.

Betsy Price, the mayor of Fort Worth, Texas, told ESPN on Sunday that her staff and tournament officials have been in constant contact with the PGA Tour as plans for coronavirus testing have been put in place for the participants and workers at the Charles Schwab Challenge, which is scheduled for June 11-14.

“I’m very optimistic we can pull this off,” Price said during a phone interview. “We’ve been working with our local partners at the tournament, and they been working diligently with the PGA [Tour] to make this happen.

“We are committed to have testing for the players, caddies and anyone who is going to be working at the clubhouse or the course. And we’ve arranged for other screening every day. It is not going to be a big crowd of people, so I’m pleased with how it is going. Health and safety are clearly the most important — not just for us, but for all of the PGA [Tour] officials and works, as well.

“And I’m excited about the chance for us to host the first PGA Tour tournament. The Charles Schwab is one of the oldest, and the oldest at the same location. This will help us send a strong message about getting back.”

Maridoe Golf Club is back for more.

The Carrollton, Texas, club will hold a second fundraising tournament, this one including Jordan Spieth, Tony Romo and Viktor Hovland. https://t.co/OIlT8AowSa pic.twitter.com/BtT2ver4ev

Maridoe Golf Club is ready to run it back.

The host of the Maridoe Samaritan Fund Invitational, which raised over $20,000 for displaced caddies last month, will be holding a second version of the event, this time nailing down commitments from Jordan Spieth among other big names who competed in the first event.

The May 19-21 event, called the MSFI 2.0, will feature an even better field than the first, too, with major winner Jordan Spieth headlining the list of competitors.

“It’s very easy to see that we’re able to do this in a social-distancing kind of way and most importantly be able to raise money for the caddies out here so that they can get through these tough times until we can get back to normal,” Spieth said after the inaugural fundraiser, which he played in the final day as a marker. “We had fun in the same process of being able to kind of help out, and all in all, that’s a win-win for all.”

The list of competitors also features more than a dozen of the best college golfers in the country, including Augenstein, Pepperdine’s Sahith Theegala and Oklahoma State’s Austin Eckroat. This was made possible by the NCAA, which on Friday made an exception to a recent COVID-19-related ruling that prevented college players from playing until the scheduled end of the spring season, which, of course, was canceled in March.