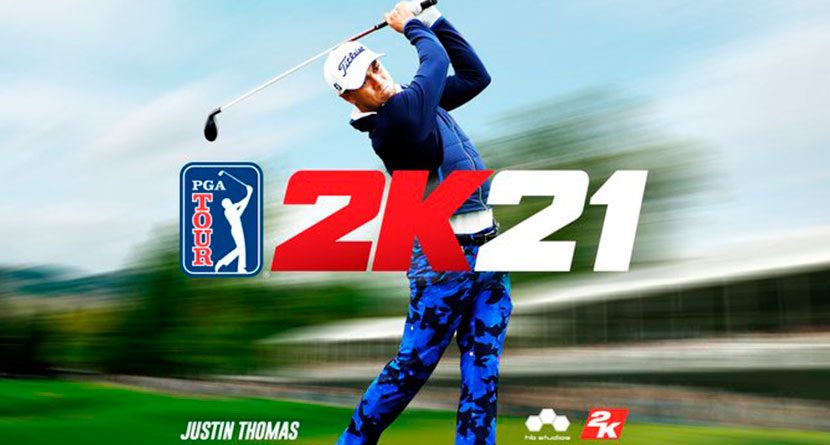 Play against real-life @PGATOUR Pros on real deal courses. Swing with swag, and get your victory dance ready… #PGATOUR2K21 is coming August 21! Golf Got Game ? pic.twitter.com/TOhrdyaYOb

It’s been five years since golf fans have been able to virtually tee it up on their preferred gaming console and play as PGA Tour players on officially licensed courses. That drought will end on August 21 as PGA Tour 2k21 will be released.

Justin Thomas will grace the cover, telling ESPN.com, “It’s something you love to get approached about. It’s something I’ve never experienced, having never been in a video game. This is a heck of a start. It was awesome.

“For me, it was one of those things when I got asked and approached about it … you dream about it as a kid. Next thing you know, I see the picture of me on the cover and it’s really happening. And it’s an accomplishment I’ll always remember.”

This August: Golf Got Game. Get your victory dance ready, because 2K has officially announced that PGA TOUR® 2K21 will hit shelves on Friday, August 21, 2020 for the PlayStation®4 system, the Xbox One family of devices, including the Xbox One X and Windows PC via Steam, Nintendo Switch™ system*and Stadia.

Developed by HB Studios, the crew behind The Golf Club 2019 Featuring PGA TOUR, PGA TOUR 2K21 will serve up real pros and real courses including 15 licensed PGA TOUR courses, each scanned using cutting-edge tech to bring all your fave fairways, greens, bunkers, trees, lakes and ponds to life. Even better? You’ll get to dream it, build it, play it as you create your own tricked-out courses with thousands of custom options in the Course Designer.

In PGA TOUR 2K21, to be the best, you have to beat the best. The game features cover athlete Justin Thomas, plus 11 other PGA TOUR pros, who are ready to stand between you and golfing glory in PGA TOUR Career Mode as you compete to become a FedExCup Champion. You can also swing with swag as you create and personalize your very own MyPLAYERs with equipment and apparel from licensed brands including adidas, Polo, Malbon Golf, Callaway Golf, Bridgestone Golf, TaylorMade Golf and more.

The 12-time European Tour winner autographed and sold over 750 used items to benefit COVID-19 relief. Everything from gloves, hats, shirts and shoes sold out in just over four hours on Thursday

Incredible all the 782 items are fully sold out. I can’t Thank you enough for how quick they sold.
Help others is what matters and you have done that. ???? All money raised will go to Covid 19.
Sorry if you missed out, the response was amazing.
Stay Safe friends ?????? pic.twitter.com/ri9SMRCbkP

Top Europeans Not Like To Travel To U.S. For PGA Tour Restart https://t.co/MAyF7DPIRq pic.twitter.com/rH9SX9PjEE

While the PGA Tour is slated to get back underway in just over three weeks, players from outside the United States will have to start making the arrangements to arrive in the U.S. well ahead of schedule as various 14-day mandatory quarantine orders are still in effect.

Similarly, were those top players hopeful for a return home, other quarantine measures would be in place, leading top Europeans such as Tommy Fleetwood and Francesco Molinari in a tough spot.

From Ewan Murray in The Guardian:

Players and caddies also face restrictions. Despite being issued with paperwork which, when verified, will permit entry to the US, government regulations mean visitors from countries including the UK must self-isolate for 14 days upon arrival.

“That is currently in place and it is likely to continue,” Andy Pazder, the PGA Tour’s chief tournaments officer, said of the US isolation policy. “So it is imperative that those constituents that we have that need to come back in the United States do so at least two weeks prior to our return to competition.

Speaking at the start of this week, Fleetwood suggested he regards the restrictions as too prohibitive. “I’m not going to travel to America and stay away for four months, that is simply not a consideration,” the world No 10 said. It is understood Molinari, who lives in London, will not travel for the June events either.

In a field that featured PGA Tour winners past and present, a recent college graduate from UC-Santa Barbara, Zach Smith, shot a final-round 62 to best 36-hole leader Carson Roberts by three and Colt Knost and Brady Calkins by five.

Among the PGA Tour players in the field, pre-tournament favorite Joel Dahmen finished T8 thanks to a final-round 71. Dylan Wu and Kevin Streelman tied for 10th and Nate Lashley finished in T16.

The Scottsdale AZ Open didn’t go to one of the regular Tour contenders in the mix, but instead to an unheralded 24-year-old who left the field in his wake. Smith shot a final-round 62 at Talking Stick Golf Club to win by three shots with a 54-hole score of 18 under.

“I just trusted my game. I’ve been working hard leading up to this,” Smith told Monday Q Info. “I was listening to a podcast on the way up here, and actually, the guy said, ‘Pressure is a privilege.’ And I took that to heart, and just trusted it and let it go.”

Smith graduated last year from UC-Santa Barbara, qualifying for the NCAA tournament as an individual in his senior year, but he has yet to make an impact since turning pro and began the week as a 500/1 longshot according to the Westgate Las Vegas SuperBook. But those odds didn’t faze him as he raced past a number of notables to capture the $20,000 top prize.