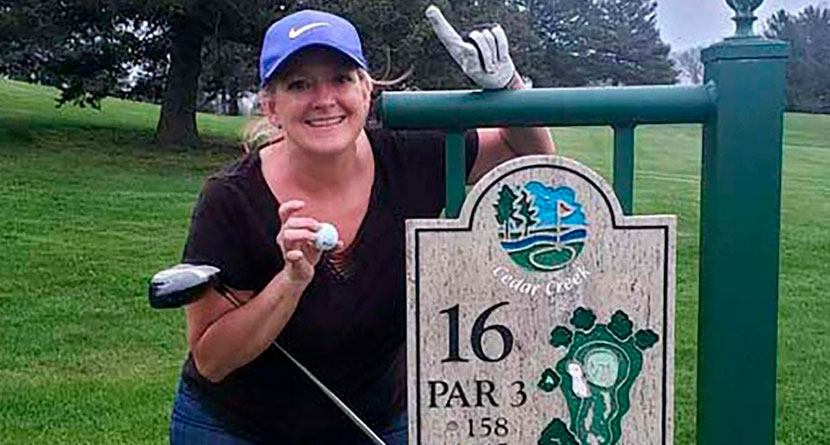 An ER nurse from Michigan recently made her first hole-in-one … in just her third round of golf. Grill Room: https://t.co/ZQrYcnVQWv pic.twitter.com/1YSCgnGWem

Good things happen to good people. In this case, the worlds of healthcare and golf collided as an emergency-room nurse made her first hole-in-one in just her third round of golf.

“I always kind of believed in karma, so maybe this is part of that, some good among all the tough times we see at the hospital every day,” Spitz told The Battle Creek Enquirer. “I don’t know if I deserved to get this because of what I do, it’s mostly pure luck, but it was nice. Certainly, something to enjoy with all that is going on.”

“I was just excited to hit a good shot. So, when I saw it hit the green I was super excited. Then it kept rolling, and rolling and then it disappeared. Some friends we were playing with ran up and saw the ball was in the hole and started yelling that I had a hole-in-one. I didn’t believe it at first, then I looked into the hole and there it was … I was shocked.”

Why does John Daly say he has Brooks Koepka calling him “Uncle John”? https://t.co/2gHF60NKt5

Brooks Koepka and John Daly may not seem like the share a lot of similarities on the surface, but a recent friendship development between Koepka’s father, Bob, and Long John has led to the four-time major winner getting closer with Daly.

Speaking on Instagram Live last week, Daly explained how he has earned familial status with the Koepka’s at last year’s PGA Championship at Bethpage Black.

“Brooks Koepka, I’ve got him calling me Uncle John now because me and his dad got along so good at the PGA in New York last year,” Daly said. “I love Brooks, but I love his dad more though, man. He is one cool cat. And he doesn’t push Brooks. I’m kind of like a father to my son like Brooks’ dad is to him. I stay away. Do your thing. And I respect him for that.

“We had a few beers together. I had played early on Friday when I missed the cut at the PGA, and he sat down with me and my family for a little bit and talked. And he goes, ‘Oh my God, Brooks is probably on six right now, I need to go out and watch my son play. I’ve had too much fun sitting here.’ Brooks was leading the tournament and he ends up winning.”

We’re pleased to announce that we will be open to the public for golf beginning on Monday, May 4th. Tee times can be made on our website: https://t.co/iW513fGT5o pic.twitter.com/WLvVf3UKdQ

One of the tentpoles of a professional golf event is that the course is operational, and for the first time since March 16, TPC Harding Park, the host of this year’s PGA Championship, will be open.

“We’re pleased to announce that we will be open to the public for golf beginning on Monday,” read an announcement on TPC Harding Park’s official Twitter page.

The PGA Championship was originally scheduled to take place May 14-17, but the championship, which will now be the 2019-2020 season’s only major, will now be played Aug. 6-9.

With rounds of 63-64-65 Harigae claims the cup and the #CactusTour scoring record (192). The @ROAD2LPGA Player of the Year in 2009 won by 9 over last weeks champ, @SophiaCPopov#SheISsport pic.twitter.com/gUyklX1MTB

The field strength at some of these mini-tour events during the coronavirus outbreak has resembled those at the highest levels thanks to fewer opportunities to compete.

While PGA Tour pro Alex Cejka has been cleaning up on the men’s side, LPGA Tour pro Mina Harigae took home a Cactus Tour title last week by nine shots, shooting rounds of 63-64-65 to post 24-under.