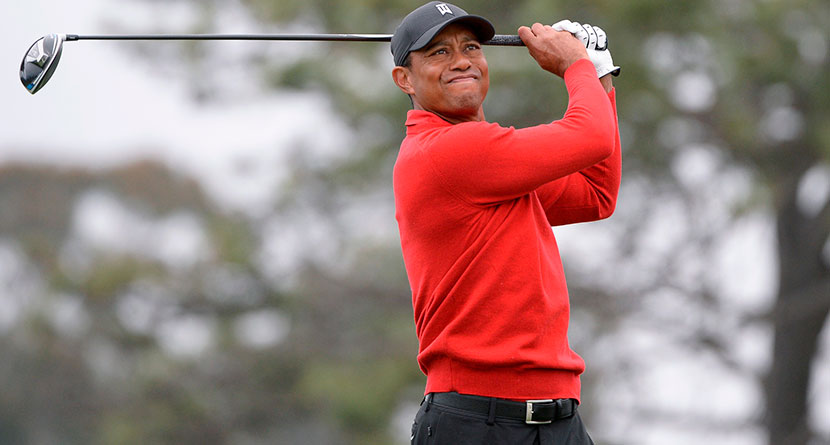 Predicting The Rest Of Tiger’s 2020 Schedule

Predicting when and where we’ll see Tiger and why https://t.co/xaL5wvT2ZR

Picking Tiger Woods’ schedule has become an exercise in experience: where has he played before, and where has he played well. Given the current circumstances, ESPN.com’s Bob Harig, one of the scribes who has covered Woods the closest, predicted where the 15-time major winner would likely tee it up when the Tour resumes, presumably, next month.

“If Tiger plays the Charles Schwab or RBC Heritage, along with the Memorial, WGC-FedEx, PGA Championship, Northern Trust, BMW, Tour Championship, U.S. Open, Ryder Cup, Zozo, Masters and Hero, that would be 12 tournaments,” Harig wrote. “And that appears to be a lot.

“More likely, he’ll skip something along the way — perhaps a playoff event, maybe the WGC in Memphis — bringing it to a more manageable 10 events. Since he already has played two in 2020, 12 events for the calendar year seems about right.”

Is there something you wanted to tell us, @Padraig_H?! ?

The Ryder Cup captain accidentally gave the #SkyGolfShow a big clue on who one of his vice-captains will be…?? pic.twitter.com/Rd7fbEtmPq

Live video chatting is a recipe for some fantastic slip-ups, whether it’s the viral kid entering dad’s office during live TV or something like what happened to European Tour Ryder Cup captain Padraig Harrington on Tuesday.

In a hit with Sky Sports’ Golf Show, Harrington accidentally semi-blurted out he had been talking with someone that sounded equal parts like “vice-captain” and “Luke.” The moment made for a funny interaction with the hosts, and eventually precipitated the official announcement that Luke Donald would join Robert Karlsson as vice-captain for Harrington’s European squad at Whistling Straits.

Sorry about that. News was too good to keep under wraps! Welcome to the Team ?? @europeantour https://t.co/4q9qnhRoJq

“It’s the 4th Quarter Baby. I don’t lose.” Michael Jordan even trash talks the best golfers in the world. @BKoepka

Sports fans have been reminded over the past few weeks just how clutch Michael Jordan was during his prime thanks to ESPN’s 30 for 30 documentary series The Last Dance. Just as entertaining has been the flood of Jordan gambling stories that have surfaced over that same period.

On Tuesday, Brooks Koepka joined The Dan Patrick Show and shared a vintage Jordan story from a round of golf the two played together a few years back as they played the final two holes of a round.

Up one with Jordan stroking on the final two holes, Koepka poked the bear on the 17th tee.

“I said something to him, and he tees the ball up, takes a practice swing and goes, ‘It’s fourth quarter, baby, I don’t lose,’” Koepka recalled. “He goes on to win 17 and then he kind of just looked at me on 18 tee, and on 18 green he shook my hand and wanted to know where my wallet’s at.”

You can watch the full Koepka interview below.

.@LarryFitzgerald was told he couldn’t join Whisper Rock until he could break 90, and he made sure to tell the club immediately when he did. @Streels54 joins @golf_subpar to discuss Fitzgerald’s golf addiction and winning the Pebble Pro-Am, twice!

Larry Fitzgerald is one of the best wide receivers in NFL history, but he’s also an accomplished golfer thanks to memberships at some of the game’s most prestigious courses, including Seminole Golf Club and Whisper Rock.

Getting into either is reason to be proud, but his AT&T Pebble Beach Pro-Am partner, Kevin Streelman, told Golf.com’s SubPar podcast that there was something attached to Fitz earning entry into the Arizona club that many PGA Tour pros call their home course.

Streelamn said Fitzgerald got to work on his game and as soon as he posted a score that started with an “8,” he gave Tryhus a call right away.

“I think he called him that afternoon,” Streelman said. “Shot his 89, called Gregg. Got in.”