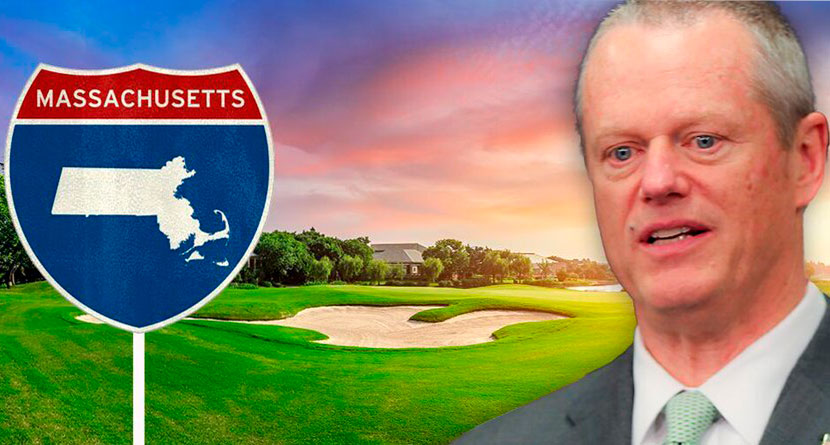 Golf is back! Massachusetts golf courses are permitted to open effective immediately.

Ironically, Massachusetts — and Maryland and Vermont, the final three state-ordered holdouts — opened its courses before its neighbor to the north, New Hampshire.

Maryland and Vermont had been the most recent holdouts to announce the reopening of their courses. Both those states’ courses also were allowed to reopen Thursday, according to the National Golf Foundation. New Hampshire beat each of those to the announcement this week, allowing its courses to reopen May 11, making it the last to have it courses closed despite the earlier announcement.

Alaska is still closed due to seasonality, and some courses are still closed because of municipal or county mandate. Across the country, 79 percent of golf courses in the United States were open as of May 3, according to a National Golf Foundation update. That’s up from 58 percent the week before.

The latest NGF data shows that 66 percent of municipal courses, 83 percent of public daily-fee courses and 77 percent of private courses were open as of May 3.

This clubhead speed is 20 MPH (!) faster than his 2019 average, and 10 MPH faster than tour leader Cam Champ. Bryson is basically turning into a long drive competitor. Alarming stuff. https://t.co/WeRMDv6fwB

One of the interesting developments of this COVID-19 quarantine has been checking in on Bryson DeChambeau from time to time.

On Thursday, we got the latest set of numbers from DeChambeau, which the guys at No Laying Up succinctly summarized: DeChambeau’s 138.7 clubhead speed is more than 10 MPH than Tour leader Cam Champ and his 205 MPH ball speed is 15 MPH faster than Champ’s, again the Tour leader.

DeChambeau’s formula to gain more distance is clearly working. Before the stoppage, he led the Tour in driving distance average at 321.3, about a yard longer than Rory McIlroy.

This Wisconsin couple pulled off an impressive hole-in-one feat while playing in Florida on Tuesday: https://t.co/AN0redjmd7 pic.twitter.com/htXuHiCBPH

Witnessing one hole-in-one is a thrill, but seeing two on the same hole by one couple is crazy.

That’s what happened during a PGA Member best-ball event for husband and wife Steve Howe and Carolyn Barnett-Howe on the 158-yard sixth hole on the Dye Course at PGA Golf Club in Port St. Lucie.

Mike Sherry of The Post-Crescent reports:

With COVID-19 safety guidelines to keep golfers from touching flagsticks, there were Styrofoam collars inside the hole which made it hard for the Howes to know if Steve’s shot actually went in the hole.

“You’re always not really sure because you can see the top half of the ball, but I’m like, ‘I saw that go down, Steve. I’m very sure you just made an ace.’ So we celebrated,” Carolyn said.

She was next on the tee, and just like her husband Carolyn hit an iron shot on a perfect flight path toward the hole.

“In midair, he’s like, ‘Holy cow! Boy, does that look good.’ And it just landed perfectly and trickled and boom. He’s like, ‘You made it, too.’ We celebrated, but I’m thinking we’re going to get up there and mine’s going to be 6 inches behind the hole,” Carolyn said. “But when we got up there, they were just stuck together right in the hole.”

It may have taken a little while to get the ball rolling, but before we get back to professional sports as we (relatively) know them, some interesting and entertaining action is coming down the pipeline.

Teams will be playing to generate revenue benefiting COVID-19 frontline workers, providing them with food and the necessary resources. Viewers will also be able to use Twitch’s chat feature to interact with the teams throughout the competition.