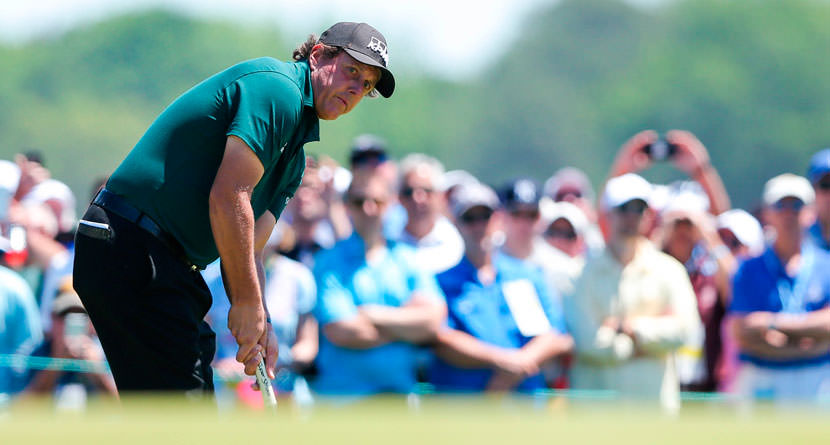 In golf, the term “moving day” refers to the penultimate round or the third round of a four-round tournament. It is the day that players try their best to move up the leaderboard in order to take over the lead or be within striking distance of the leader for the final round.

Unfortunately, for Phil Mickelson, his third round of the 2018 U.S. Open at Shinnecock Hills Golf Club on Long Island, New York, was a “moving day” for all the wrong reasons.


First of all, he posted an 11-over 81, tumbling down the leaderboard and out of contention. Second, he lost his cool on the par-4 13th hole after missing a bogey putt.

A remarkable sequence on Hole 13, where Phil Mickelson was assessed a two-stroke penalty for hitting a moving ball and ended up making a 10 on the hole. pic.twitter.com/kx6ieYiOGR

Phil watched in frustration as he saw his putt miss the hole and start down the slope. He started running after his putt, caught up with it before it rolled off the green, and then made a stroke at his ball while it was still in motion. That attempt went by the hole, and two putts later, he was walking off the green having incurred a two-stroke penalty and carding a 10 for the hole.

The applicable rule is Rule 14-5 [Playing Moving Ball] which reads, in part, “A player must not make a stroke at his ball while it is moving.”  The penalty for a breach of this Rule is loss of hole in match play, and two strokes in stroke play.

In a post-round interview, Phil admitted that he played the moving ball in order to avoid the likelihood of his having to play his next stroke from off the green and behind the bunker.

If a Committee considers that a player is guilty of a serious breach of etiquette, it may impose a penalty of disqualification under this Rule.”

The USGA chose not to disqualify Phil primarily because Rule 14-5 covers the situation. Moreover, even though his actions were not in keeping with the “gentlemen’s game,” Phil was not guilty of a serious breach of etiquette. Decision 33-7/8 [Meaning of “Serious Breach of Etiquette] points out, “A serious breach of etiquette is behavior by a player that shows significant disregard for an aspect of the Etiquette Section, such as intentionally distracting another player or intentionally offending someone.”

It should also be noted that had Phil allowed the ball to continue to its ultimate destination off the green (and even into the bunker), he could have deemed his ball unplayable at that point.

Under Rule 28a [Ball Unplayable], for just one penalty stroke, he would have been permitted to proceed under penalty of stroke and distance and place his ball on the putting surface at the spot from which he originally putted the ball.  So, by playing the moving ball, Phil incurred a two-stroke penalty when he could have gotten by with just a one-stroke penalty.