The Shot That Won Woodland The U.S. Open 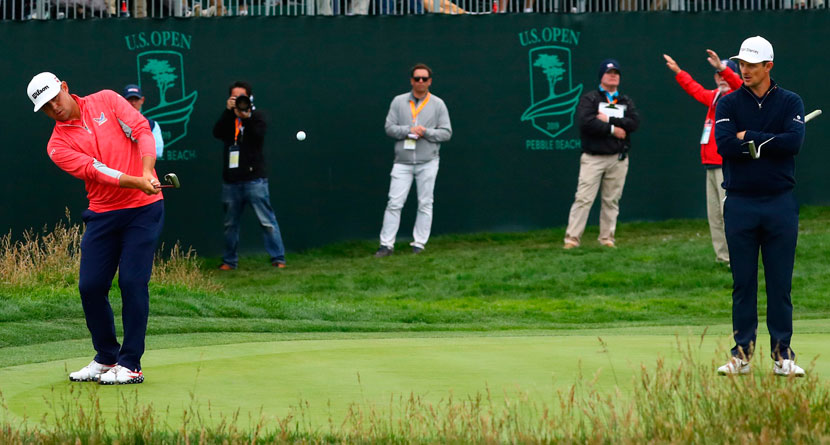 On Sunday at Pebble Beach, Gary Woodland had a championship-winning opportunity placed in front of him on the iconic 17th hole, site of Jack Nicklaus’ famous 1-iron in 1972 and Tom Watson’s chip-in 10 years later.

Having expertly held off everything Brooks Koepka was throwing at him for 13 holes, Woodland stretched a one-shot lead into a two-shot cushion with one of the shots of the championship to that point on the difficult par-5 14th hole.

The only par-5 playing over par for the week, Woodland hit a 3-wood from 263 yards just left of the green, 16 feet from the hole. He got up-and-down for birdie and parred each of the next two holes as Koepka was unable to get any closer.

With the reigning champion, Koepka, ahead of him in the fairway at the reachable par-5 18th hole, Woodland flared his tee shot to the right side of the hourglass green leaving him without many options to play a shot from 90 feet from the hole.

“Wasn’t too many options,” Woodland said after the round. “If I putted it, I don’t think I could have got within 20 feet. Fortunately I did have that shot earlier in the week. And I was just trying to get it down there, trying to get it past the hole so I could be putting back uphill, and it came off perfectly.”

Gary Woodland nearly holed the chip from ON THE GREEN! #USOpen pic.twitter.com/IWGxmVouf4

Woodland’s 30-yard pitch came to rest two feet from the hole and he salvaged his par.

The pitch from the green was one that took Woodland back to his earliest days committing to golf in 2005.

“It was 64-degree wedge and I clipped it perfectly,” Woodland said. “You know, when I started to transition into golf, I started working with Randy Smith, in 2005, I believe, and the short game was really what was really bad, to be honest with you.

“And so my whole deal was I had to hit chips off putting greens all the time, and there were some times where superintendents weren’t a huge fan of me. But I’ve hit a lot of chip shots off putting greens, and I credit that to Randy Smith.

“I’ve got more confident over the years. But I was fortunate enough to have that shot earlier in the week and execute it the exact same way.”

Ahead, Koepka nuked a 3-iron over the back of the 18th green, and was unable to get up-and-down for birdie. With two shots to play with, Woodland took an iron off the 18th tee, hit a well-executed layup and found the putting surface safely from 146 yards away.

With three putts to win, Woodland finished in style.

WHAT A WAY TO FINISH!

Woodland’s 13-under par mark was enough to earn a three-shot victory and his first major championship.

Gary Woodland gets his ?#USOpen pic.twitter.com/1Hc84nxLrA