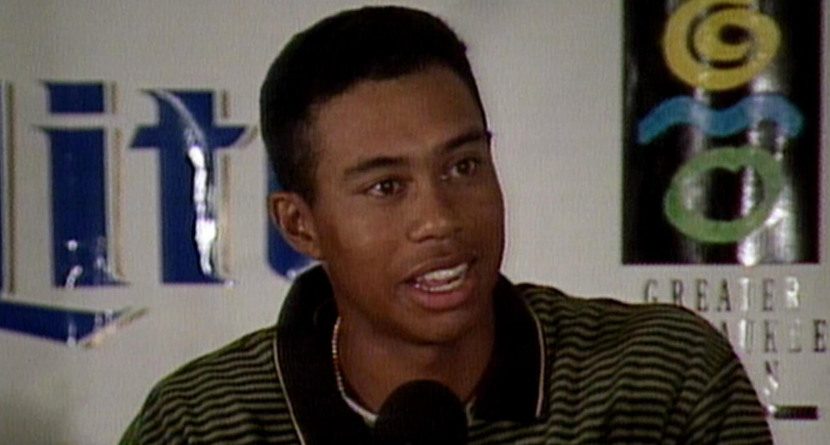 On August 29, 1996, Tiger Woods made his professional debut and the game of golf changed forever. It’s hard to believe that was 20 years ago!

From his “Hello World” press conference, to making an ace in his first event, the kid named Eldrick became an instant celebrity known as Tiger.

While Woods didn’t win the Greater Milwaukee Open that week — he finished T60 — Golf Digest put together a list of interesting tidbits you either didn’t know or don’t remember about Tiger’s first PGA event as a pro.


Here’s a sampling of the best:

Woods’ agency, IMG, initially planned for Tiger to announce he was turning pro at Niketown in Chicago. That idea was scrapped. Instead, he released a statement on that Tuesday that he was turning pro, then held his “Hello World” news conference on Wednesday. Among the media outlets on hand were People and Newsweek magazines and the television show “Extra,” a strong indication that a new higher-profile era in golf had begun.

The Woods family — Tiger, father Earl and mother Kultida — was sporting 27 Nike swooshes on its clothing and shoes on Wednesday, though Kultida vowed not to give up the Reeboks that she had been wearing the week before. “They pay Tiger, they don’t pay me,” she said.

Tiger was a kid in a candy store

Nike sent Woods several bags stuffed with shirts and pants. At his locker at Brown Deer Park, he found four new Titleist golf gloves and three dozen Titleist Tour balata balls. He was giddy. “He was like a 10-year-old dropped into the middle of Toys ‘R’ Us,” Harmon said.

On the first tee of Tiger’s first round as a professional, the starter announced, “From Orlando, Fla., making his professional debut, Tiger Woods.” From Orlando? The last time Woods had been in Florida was two years earlier, when he won his first U.S. Amateur at the TPC Sawgrass. “No, I don’t have a house there yet,” he admitted later. “I’m trying to get out of California state income taxes. I’ve always wanted to live in Florida.”

A fatigued Woods was never in contention, yet on Sunday, he still found a way bring the focus back on him, as he was wont to do. On the 202-yard, par-3 14th hole in the final round, Woods made a hole-in-one using a 6-iron. Woods earned $2,544 for finishing tied for 60th, a sum of money he appreciated more than than the $43 million in contracts he had signed. “That’s my money,” he said. “I earned this.”