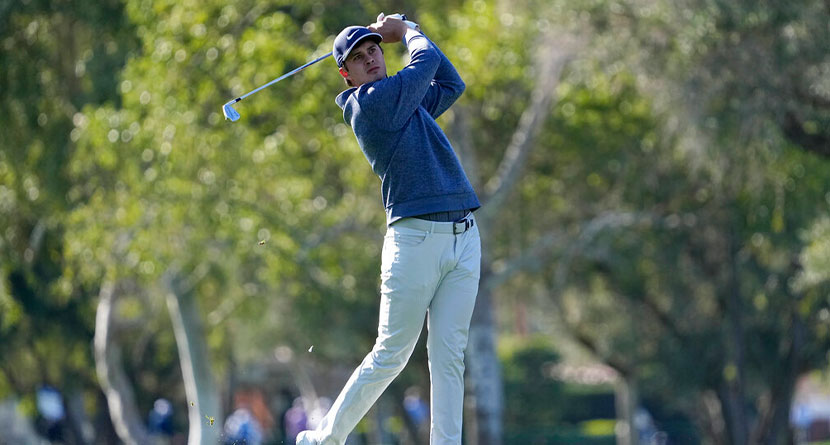 LA QUINTA, Calif. (AP) — PGA Tour rookie Davis Thompson played his first six holes in 7 under, including consecutive eagles, and shot a career-low 10-under 62 at La Quinta on Thursday to take a two-stroke lead over Jon Rahm and four others after the first round of The American Express.

The 23-year-old Thompson got off to a brilliant start by birdieing three of the first four holes and then making eagle on both par-5s on the front nine, Nos. 5 and 6. He made the turn in 8-under 28, the lowest front-nine score at La Quinta.


“I just got off to a hot start and just kind of coasted on my way in,” said Thompson, who finished with a birdie. “It’s always good to see some putts go in early and give you confidence to just keep it rolling.”

Rahm, the world’s fourth-ranked player who won two weeks ago at Kapalua, shot 64 at La Quinta, one of three courses being used for the first three rounds. After the cut at 54 holes, the final round will be played at the Stadium Course at PGA West.

Leaderboard after Round 1 @TheAmExGolf ⛳️

“I’ll be picky about a lot of things. But it’s a great start to the tournament,” Rahm said. “You can’t really win it on this golf course, but you can sure fall off the pace. It’s a great start, solid round of golf, great putting out there. Hopefully I can keep that going the whole week and feel a little bit better tee to green.”

The field includes five of the top seven players in the world and 10 of the top 20.

Sixth-ranked Xander Schauffele, in the field after having tests on muscle spasms in his back, was in a group of nine at 7-under 65. He also eagled No. 5 at La Quinta.

Second-ranked Scottie Scheffler and No. 5 Patrick Cantlay each shot 68 at La Quinta, and No. 7 Will Zalatoris had a 3-under 69 at the Nicklaus Tournament Course.

Thompson said he had a good warmup and then “had good numbers” on the holes where he made eagle.

“I actually missed the green on 6 and chipped in. I put two good swings on it and had a really nice chip and a really good putt,” he said.

While this was his first competitive round at PGA West, Thompson said he stopped here and played the Nicklaus course before going to Hawaii for last week’s Sony Open. “So I was a little familiar with it,” said Thompson, who will play that course on Friday.

Rickie Fowler shot 68 at La Quinta. Fowler is playing his first tournament of 2023 after having two top 10s in the fall, including a runner-up finish at the Zozo Championship in Japan.