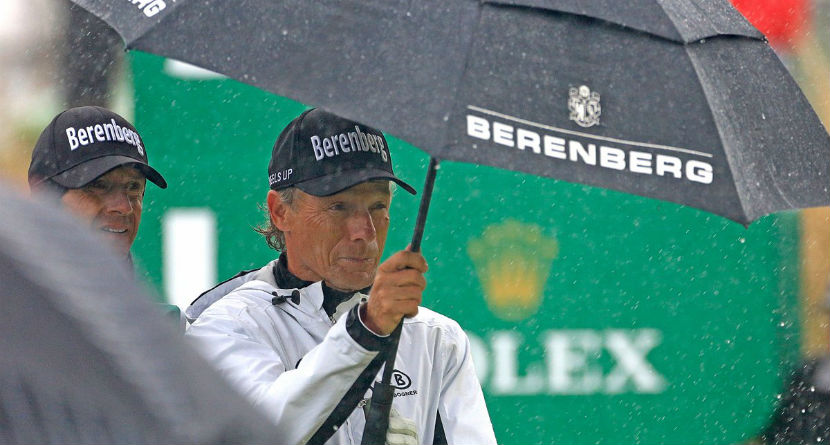 If you watch the Open Championship for the links golf, sideways rain, and gusty winds, you’re in luck. Royal Birkdale may be over, but the Senior Open Championship is being played this week at Royal Porthcawl in Wales, and to say the weather has been proper is an understatement. After 36 holes nobody is under par and Friday was pretty much carnage.

The second round featured periods of brutal driving rain and winds gusting over 35 mph which sent scores skyrocketing. The field’s average score was a 78.515, the second highest in the championship’s 30-year history. Only the first round during the 2009 Senior Open at Royal Aberdeen was higher when it played to an astounding 80.118 scoring average. The 36-hole cut came at 13-over, also ranking as the second highest.

Only one player broke par with a 70. In fact, there were actually more rounds in the 90s than there were under par. Three players failed to break 90!

American Mike Heinen managed to birdie his last hole of the day to shoot 96.

We’ll give English amateur Stephen Creed the benefit of the doubt with his 94 by coming home in a respectable 50.

American Don Thames rounded out the trio when he signed for 90 as well.

Needless to say, all three players missed the cut. Five players share the lead at +1 heading into the weekend including Bernhard Langer who’s vying for his third major of the year, and Tom Lehman who’s looking for his first Senior Open title.

WATCH: Highlights from the second round of the Senior Open Championship Presented by Rolex #SeniorOpen pic.twitter.com/2MYivZIuLg