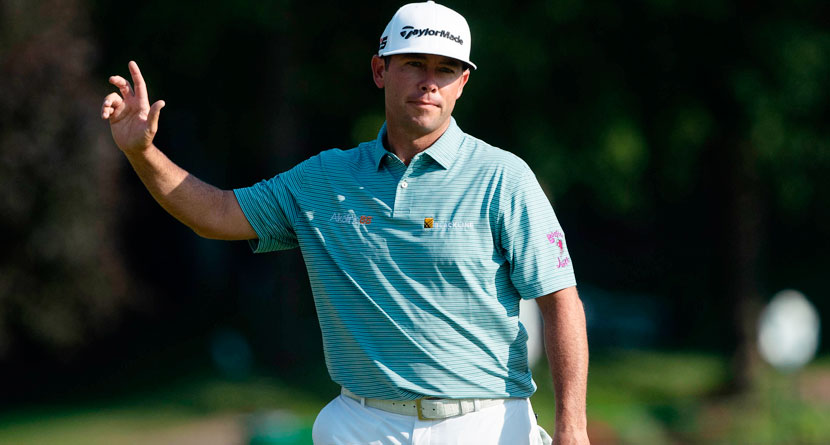 Sunday at the Travelers Championship seemed destined to be a victory lap for Chez Reavie, a 37-year-old Tour pro whose most recent victory came at the 2008 RBC Canadian Open, but it was anything but.

Coming off of a tie for third at last week’s U.S. Open, Reavie opened up a six-shot 54-hole lead at TPC River Highlands, but it took until the 18th tee on Sunday before the Kansas native could start to breathe easy once again.

While others nipped and tugged at his cushion, Reavie, who trains under SwingU Master Faculty Member Mark Blackburn, shot an even-par 35 on the front nine of TPC River Highlands to maintain a five-shot advantage over clubhouse leader Paul Casey, but Reavie’s biggest challenge was about to come from inside his pairing.

Playing alongside Keegan Bradley, a local favorite from up the road in Vermont, Reavie saw his lead shrink to a single stroke as Bradley made birdies on Nos. 10, 11, 13 and 15 to reach 15-under par.

“I knew Keegan was going to come out firing today and ready to go. I’ve played a lot of golf with him. He’s a fantastic player,” Reavie said. “I just was fortunate enough to stay patient and make that big putt on 17 to give myself a little cushion on 18.”

Under the gun and facing a hole that didn’t set up well to his eye, Reavie executed the shots he needed to turn a one-shot lead into a four-shot lead, thanks to some help from his playing partner.

No. 17, the hardest hole of the week @TravelersChamp.

It’s also the hole that sealed the victory for Chez Reavie. pic.twitter.com/N0NhVtTt1M

Reavie found the fairway and the green on the penultimate hole while Bradley hit his tee shot into a fairway bunker and his second well over the back of the green. A chip and three putts later, Bradley made double bogey at the worst possible time.

“(I) hit a 9-iron and skulled it,” Bradley said of his second shot into 17. “Just hit it thin, just a brutal shot — fairway bunker, water short — just a brutal shot and I got it thin. If I could have a shot back obviously that would be the one.”

The four-shot cushion allowed Reavie to play the 72nd hole relatively stress-free. Another fairway, another green and two putts from 52 feet earned him his second career PGA Tour victory.

With job status and some extra money in the bank, Reavie is able to concentrate the rest of the season on some bigger goals he has, which include making it to East Lake as well as a possible trip to Australia.

“Making it to Tour Championship would be a goal of everyone at the beginning of the year, and fortunately I’m a long way towards that goal,” he said. “Hopefully I’ll be inside that top 30 and be off to the Tour Championship and hopefully make the Presidents Cup team.”