Three Shots At The Green: Best Bets For The American Express 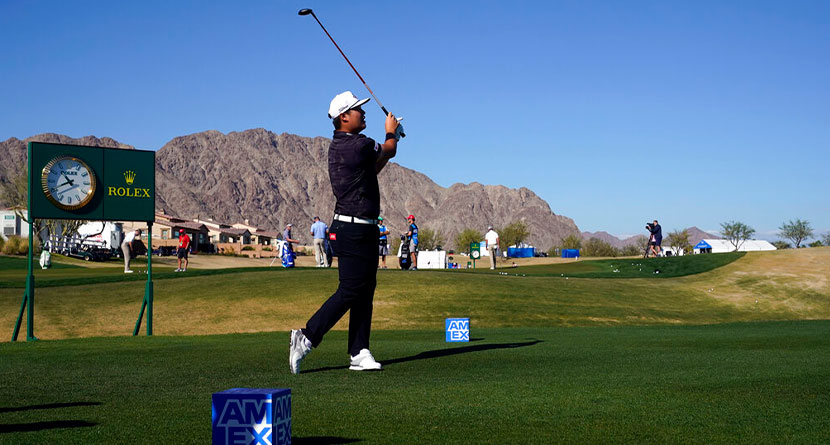 The PGA Tour meanders back to the mainland this week for a three-course extravaganza once known as the Bob Hope, but simply called The American Express in this modern corporate era.

A 156-man field embarks on a unique format, playing one round each at the host PGA West Stadium Course, the Nicklaus Tournament Course and nearby La Quinta CC. After 54 holes, the top 65 and ties return to the Stadium Course for the final round.


The courses are short and easy. Each measures less than 7,200 yards and the majority of the field can reach the 12 par-5s sprinkled around the desert with nothing more than a long iron approach shot. It’s not a week to be conservative. Avoid the desert and water hazards off the tee, attack the flags with short irons and wedges, hole some mid-range putts and try to shoot 5 or 6 under par each day.

Temperatures in the low-to-mid 60s, wind in the 5 mph range each day and hole locations cut so the amateurs who play alongside the pros in the first three rounds can finish without embarrassing themselves, should create a shootout.

Longshots have thrived in this tournament in recent years as eight of the last 11 champions started the week at 55-1 odds or longer. This year’s tournament features the strongest field in recent memory, however, with eight of the top 15 in the world on hand.

We kept the model simple this week, looking at players with past success on desert courses, similar TPC courses and certain other Pete Dye courses. We also targeted sharp short iron and wedge players as well as those who have proven they can go low in easy scoring conditions.

Last week wasn’t great, but the Tour season is a long journey.

Im played in the American Express the last four years, finishing 12th, 10th, 12th and 11th. He was No. 1 on this week’s model because of his all-around excellence on shorter courses and in easier scoring conditions. He’s fourth in SG: Tee-to-Green over the last 50 rounds in easy conditions and 2nd in SG: Approach in the same time span on courses shorter than 7,200 yards.

Don’t worry about his missed cut last week at Waialae. He suffered the same fate last year, came to the desert and – despite losing 1.1 shots putting – fired 16-under, including a final-round 66 on the host Stadium Course.

Poor Hoge’s week at Waialae was doomed from the start. First, he made the long flight to Los Angeles to watch his beloved TCU Horned Frogs get trounced in the football national title game. He must have left his short game in California also, dropping nearly four shots around the greens in a T-41.

We’re going to focus on the positive, though. For starters, TCU was in the national title game, something nobody expected. Second, Hoge’s pinpoint iron play continued. He gained 4.9 shots on approach and bettered the field average on the greens. Hoge also shot a pair of 67s on the weekend. Now he returns to the AMEX, where he was the runner-up a year ago, and also tied for sixth in 2020.

Poston, like Hoge and Im, is playing for a third consecutive week. His results in the Southern Calfornia desert aren’t quite as gaudy as the other two although he does have a T-7 in 2019 and T-25 last year. Poston has always been a great putter but his Tee-to-Green game has never been stronger (tops in the field on courses less than 7,200 yards) and his world ranking (50) has never been higher.

He’s recently married, sitting on a two-year exemption earned by winning the John Deere Classic, has a great caddie and his UNC Tar Heels are starting to figure it out on the basketball court. Life is good. The greens are perfect in LaQuinta this time of year. Expect the Postman to hang around the leaderboard all weekend.

Last Week: -3 units. Atrocious putting by Svensson (-4.5 shots to the field) and poor short game play by Henley (-2.1 shots), left both just a couple of shots outside the top 20.