Tiger Admits The Open Is His Best Chance At A Major 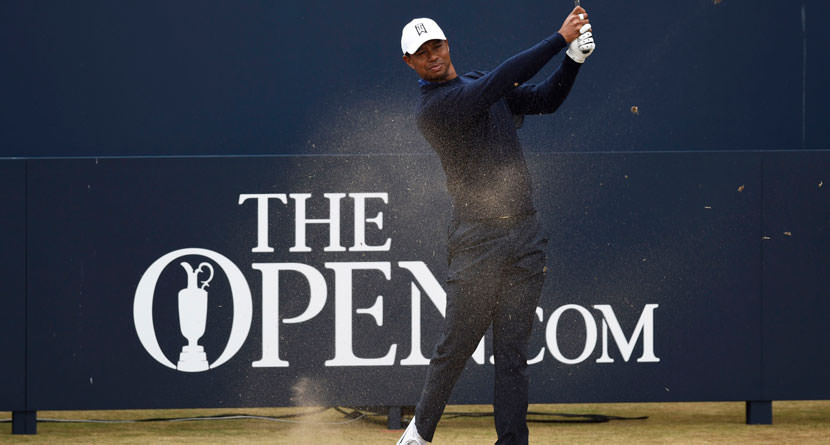 Like it or not, Tiger Woods is not far off from hoisting another trophy and many believe his best shot at winning a major championship will come at the Open. As it turns out, Tiger agrees with that sentiment.

“I would say yes (the Open is my best chance to win a major) because of the fact that you don’t have to be long to play on a links-style golf course,” Woods said. “It certainly can be done.

“You get to places like Augusta National, where it’s just a big ballpark, and the golf course outgrows you, unfortunately. That’s just the way it goes. But a links-style golf course you can roll the ball. As I said earlier, I hit a 3-iron that went down there to 330. Well, even if I get a little bit older, I can still chase some wood or long club down there and hit the ball the same distance.

“So distance becomes a moot point on a links-style golf course, but creativity plays such an important role, and you’ve got guys like Tom (Watson) playing late in his career, doing well. There’s a reason why he won five of these – very creative and hit all the shots.”

While many believe that Woods will always contend around Augusta National for similar reasons to the Open with respect to experience and creativity around the greens, the fact of the matter is that Woods hasn’t won a Masters since 2005, after which significant changes have been made to the course. His inconsistent driving around U.S. Open setups will always be a deterrent to him winning another one of those titles, and PGA Championships have come to represent souped-up PGA Tour events that require guys to go super low and make a ton of birdies.

When you think about Woods’ chances in those terms, the hierarchy of Woods’ likelihood to win another major ranks the Open, the PGA, the Masters and then the U.S. Open. Whether Woods agrees with that delineation is uncertain, but we now know he views this week’s tournament as his best shot going forward.