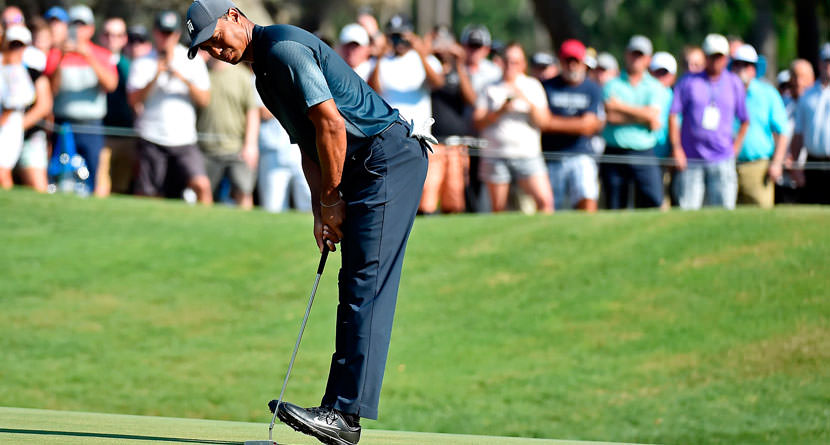 The featured groups at The Players Championship played some of the worst golf of the opening rounds with several stars earning an early exit out of TPC Sawgrass.

Phil Mickelson, Rickie Fowler and Tiger Woods played in a dream foursome that didn’t deliver over the first two days. Woods was erratic on the course. Mickelson seemed more inclined to sell a dress-down shirt and Rickie Fowler’s round required a set of binoculars. The other featured group included Justin Thomas, Jordan Spieth and Rory McIlroy wasn’t much better.  McIlroy, Mickelson and Fowler all missed the cut.

Not what was expected from the marquee group of the tournament.


Of some of the most recognizable names in golf,  Woods squeaked into the weekend only because of bogeys by Jordan Spieth and Justin Thomas on 18 moved the cutline. Thomas and Spieth are also both 1-under and barely made the cut.

There will be a secondary cut after Saturday’s round to whittle the field as close to 70 players as possible. The Stadium Course at TPC Sawgrass is playing easier than expected with Webb Simpson at 15-under after two rounds with a 63 on Friday despite a double-bogey at the famed 17th.

The playing conditions meant little to the featured groups of the tournament and turned into a massive letdown.

“Looking at the scoreboard, it looked like it played easy out there,” McIlroy said. “But our group didn’t feel like that, with what we shot.”

Right on the cutline, the worst time to get an unlucky bounce for @McIlroyRory.#QuickHits pic.twitter.com/TGdUDpTgE5

Woods was the only one his group to shoot under par and sits at the cutline of 1-under. Woods’ iron play was erratic on Friday and he had to wait around and see if he would even have an opportunity to play on Saturday. He is coming off a 55th-place finish at Wells Fargo last week.

“That’s golf, unfortunately,” Woods said. “If we were able to put all of our facets of the game together, I think there would be a lot more tournament winners out here.”

Mickelson, who made more of a splash with his dress shirt than his golf swing, couldn’t even position himself for some help by other golfers late. He had an opening round 79, 7-over, and doomed himself to just being a marketer on Friday with his dress. Mickelson shot a 73 on Friday and finished 8-over after two days.

The good news for Mickelson is the button-down golf dress shirt he wore on Thursday is a hit with the fans. According to Golf.com, Mizzen+Main, a six-year-old apparel company, had its best apparel sales day in company history on Thursday.

As for the leader Simpson, the Wake Forest product had a truly special round fizzle out on the famed 17th hole. At 11-under par for the day, and coming off of six consecutive birdies, Simpson’s tee shot on the par-3 17th hit the bulkhead short of the green and bounded onto the back and over in to the water.

The highest of highs.
To the lowest of lows.

This game will toy with your emotions like nothing else can. pic.twitter.com/E61sdKFHQC

Simpson finished with a par on 18 to tie the course record.

“It’s rare as a golfer where everything is working well: driving, iron play, chipping and putting,” Simpson said. “Today everything came together.

“I didn’t know the record. I figured I was probably close, but to be honest, I cared more about having a good routine and hitting a good shot in this golf tournament than the record. The records are just bonuses to good play.”